Business As Usual For Michel Pereira

Heading Into His 40th Professional Fight, A Last-Minute Change In Opponent And Venue Has Very Little Effect On UFC Welterweight Michel Pereira. He's Just Here To Do His Job
By McKenzie Pavacich, on Twitter @mpavacich_ • Jan. 21, 2022

As Michel Pereira prepares to make the walk for his 40th professional fight, he does so with the go-with-the-flow personality and bold confidence we’ve come to know so well over the course of his six-fight stint in the UFC.

So when a last-minute opponent change moved his first fight of 2022 back a week, it remained business as usual.

“There was no change. I’m very prepared for this fight, as always,” Pereira said, smiling throughout the entirety of his slot at the UFC 270 media day. “It’s going to be as it’s always been. Nothing changed because I was able to remain with the same weight, so I’m ready for anything come Saturday.” 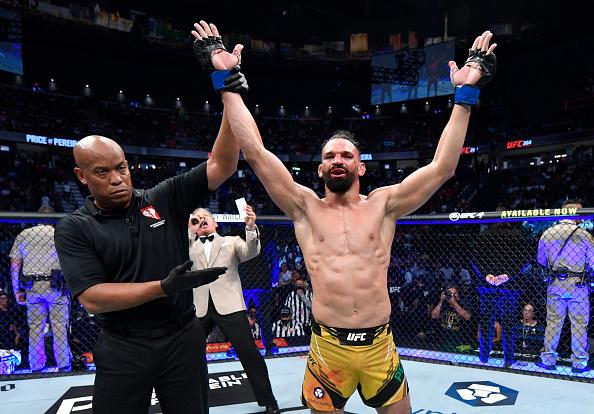 Michel Pereira of Brazil reacts after his decision victory over Niko Price in their welterweight fight during the UFC 264 event at T-Mobile Arena on July 10, 2021 in Las Vegas, Nevada. (Photo by Jeff Bottari/Zuffa LLC)

Fighters usually have one of two approaches when it comes to preparing for a fight: cater the entirety of your gameplan and camp toward the style and strength of a single opponent, or focus on capitalizing on your own strengths, no matter who the opponent might be.

“Demolidor” uses the latter, which benefited him this time around when Muslim Salikhov was forced to withdraw from their bout, altering the makeup of the matchup completely from a fight between two rising prospects in the welterweight division to the classic matchup of a fighter with a solid footing in the UFC versus an eager debutant.

“I changed many things and organized a lot of things with my trainers in Brazil, so I’m much more prepared,” the 28-year-old said. “This time I prepared myself a little more. It doesn’t matter who the opponent is going to be, I’m prepared.”

Now set to take on UFC newcomer Andre Fialho, Pereira recognizes the position he’s in as he welcomes the Portugual native to the biggest stage in mixed martial arts

“I’m very happy to be on this card and that UFC is looking at me in a bit of a different way,” the Brazilian said, speaking of the entertainment value he knows he brings to the Octagon. “I like it. This is a good opportunity. So I wanted to thank the UFC for putting me on this card. I’m prepared to make this a show.” 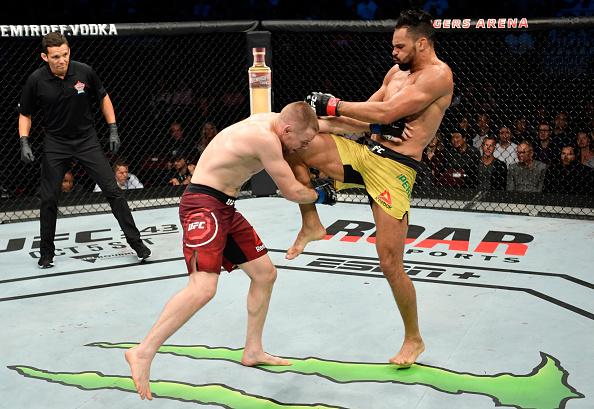 Michel Pereira of Brazil knees Tristan Connelly of Canada in their middleweight bout during the UFC Fight Night event at Rogers Arena on September 14, 2019 in Vancouver, Canada. (Photo by Jeff Bottari/Zuffa LLC)

This fight promises to deliver on fireworks as the precursor to the two title fights at the top of the card, with Pereira riding a three-fight win streak, and Fialho carrying in a streak of his own from his past four — four fights, four finishes, three in the first round.

And while two of Fialho’s four last wins have been over former UFC competitors, Pereira isn’t worried about the matchup stylistically or in terms of experience.

“I’m a fighter that strikes more, although I also have jiu-jitsu skills,” the Brazilian jiu-jitsu and karate black belt said. “But I’m the type of fighter that goes wherever the music takes me. I’m ready for any way he’ll fight. Above, on top, below, I’m prepared.”

Not only is Pereira looking to make a statement in welcoming a newcomer to the welterweight ranks, but he’s also going to be looking to set the record straight regarding his ground game. 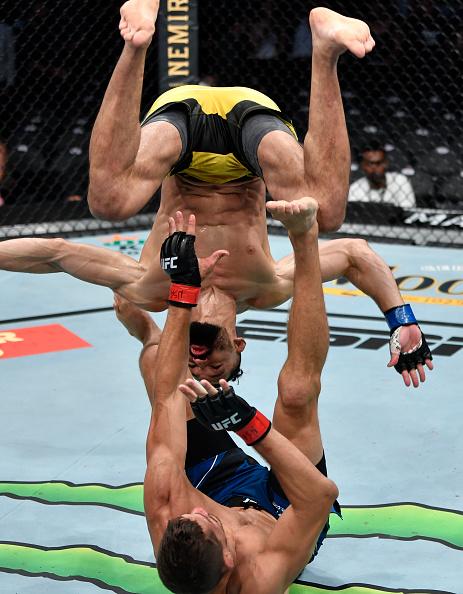 Michel Pereira of Brazil attempts a back flip guard pass against Niko Price in their welterweight fight during the UFC 264 event at T-Mobile Arena on July 10, 2021 in Las Vegas, Nevada. (Photo by Jeff Bottari/Zuffa LLC)

“I saw in an interview that he said that I’m not very good on the ground. So I wanted to point out that I’m a black belt in jiu-jitsu,” Pereira said, grinning. “For his information, I’m very good at jiu-jitsu, but I haven’t been able to show off my skills as much in the UFC yet. If he wants to know if I’m good or not, he can come test his skills with me on Saturday.”