Interim UFC Heavyweight Champion Ciryl Gane Has Been Preparing To Be Champion Since The Day He Turned Pro. Fighting A Familiar Face In Francis Ngannou Is Just An Added Bonus
By E. Spencer Kyte, on Twitter @SpencerKyte • Jan. 17, 2022

Ask Ciryl Gane if he expected to fight Francis Ngannou for the undisputed heavyweight title this quickly, and the current interim titleholder will immediately tell you that he thought it would take more time.

“Fighting against Francis was in the back of my head but, for me, it was not close,” said Gane when asked about their impending clash atop the division. “I thought we had time. Maybe I was going to grow up, I’m going to improve, and I’m going to go to the top one day — and I hoped (that would happen) because I do this sport for that — but it’s not close.

Saturday’s meeting between the two champions that closes out UFC 270 at Honda Center in Anaheim, California comes three years, five months, and 21 days after the 31-year-old from La Roche-sur-Yon, France made his professional mixed martial arts debut. 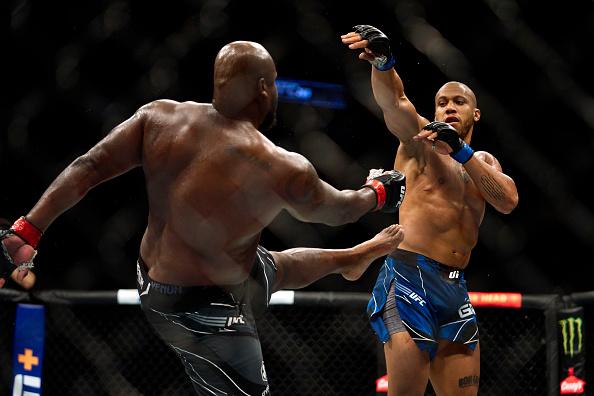 Ciryl Gane of France avoids a kick from Derrick Lewis in their interim heavyweight title bout during the UFC 265 event at Toyota Center on August 07, 2021 in Houston, Texas. (Photo by Cooper Neill/Zuffa LLC)

In just 10 fights, Gane has gone from a neophyte with a background in Muay Thai and kickboxing to standing as the 1B to Ngannou’s 1A in the UFC heavyweight division. He’s undefeated, with more than two-thirds of his victories coming inside the Octagon, and last year alone, the humble standout earned victories over Jairzinho Rozenstruik, Alexander Volkov, and Derrick Lewis, claiming the interim strap in the latter of those contests by stopping “The Black Beast” in the third round.

While Gane thought it would take some time before he found himself opposite Ngannou, his head coach at Paris’ MMA Factory, Fernand Lopez, knew it would come sooner, rather than later, and drilled into his charge to be ready and more outwardly confident about his skills.

“For Fernand Lopez, it was, ‘It’s going to be tomorrow, so be focused, be ready because it’s going to happen,’” Gane said, echoing sentiments Lopez himself shared with me at the start of last year, when he was serving as the translator on a call ahead of Gane’s clash with Rozenstriuk.

As the soft-spoken and mild mannered “Bon Gamin” (translation: “Good Kid”) danced around singing his own praises in hesitant English, Lopez playfully erupted and interjected.

““Ciryl is not a rookie anymore — he’s a contender for the title!” Lopez declared. “He’s a f****** contender! People need to know that. He’s humble, but I’ve never seen someone improving and growing that much, that fast, that well. 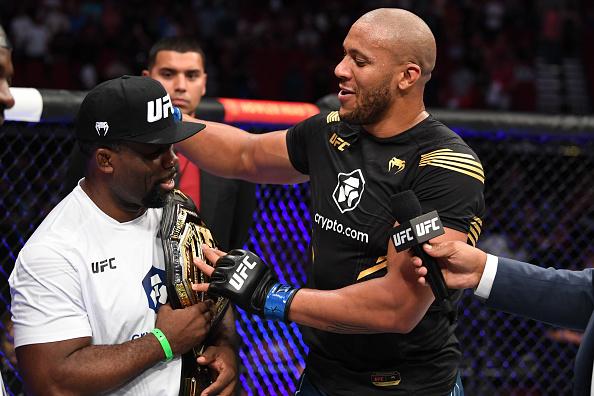 Ciryl Gane of France interacts with his coach Fernand Lopez after defeating Derrick Lewis in their interim heavyweight title bout during the UFC 265 event at Toyota Center on August 07, 2021 in Houston, Texas. (Photo by Josh Hedges/Zuffa LLC)

“I’m sorry to interrupt him, but it’s frustrating for me because people don’t realize how good he is. I’ve been training a lot of guys and (where he’s at) is beyond imagination.”

Less than a year later, Gane has backed up everything Lopez said about him and then some heading into this weekend’s massive encounter with Ngannou.

A lot has been made about the relationship between the two, which is more of a continuum linking Lopez to the heavyweight standouts than anything else, as Ngannou was already living in Las Vegas when Gane became the latest talent to emerge from under the coach’s watchful eye.

Calling them “training partners” is a bit of a stretch in terms of how that designation is usually doled out in this sport, as both maintain their interactions in the gym were limited to only a handful of sessions. But there are clearly tensions between the two sides, with Ngannou and Lopez seeming to have a falling out soon after the fighter’s loss to Stipe Miocic at UFC 220, when his attitude and the way he was carrying himself at the time was called into question.

“I don’t want to judge Francis because he came a long way and he did very well in this sport,” Gane said when asked about the way his opponent this coming Saturday carries himself. “I don’t know where he’s from, what experiences he lived, so I don’t want to judge. Today, you can look at (the relationship he has with) some of his former coaches, the UFC, and you can see, you can say he has a big ego.

“But maybe this is an example of his ego: we were in Madison Square Garden, I was in the corner of Nassourdine Imavov, he just won his fight, and Francis arrived at this moment,” he said, explaining the interaction that many have since seen on social media. “But I think he didn’t see me and Fernand Lopez and he crossed like we were not there.

“If you ask me if that is right or wrong, yes, I think this is wrong.”

🏆 @Francis_Ngannou & @Ciryl_Gane get a good look at each other months before their championship clash! pic.twitter.com/mVVlH93rAJ

But Gane isn’t preparing to face Ngannou to defend his coach’s honor or make him atone for the perceived snub — he’s readying to face the fearsome power hitter in a bout to determine the undisputed UFC heavyweight champion.

And while he’s complimentary of Ngannou as an athlete and competitor, the interim champion is certain that he will prove his superiority on Saturday night.

“The second fight against Stipe was really great; Francis did really well and he improved a lot, not only with his skills, but with his Fight IQ and with his tactics,” Gane said of Ngannou’s championship victory at UFC 260. “Francis is a really great fighter, a great athlete. It’s crazy to have a big guy like that, with speed like that, power like that. He’s in great shape, and he’s really big. He has his strengths, but I have mine, and I think I can do really well against this type of fighter.

“I think my advantage against Francis will be the footwork,” added Gane. “In this division, I have the best footwork and I’m more well-rounded, also. I have more skills than him.

“For this fight, I don’t know what’s going to happen exactly, but at the end of the fight, you’re going to see my hand raised.” 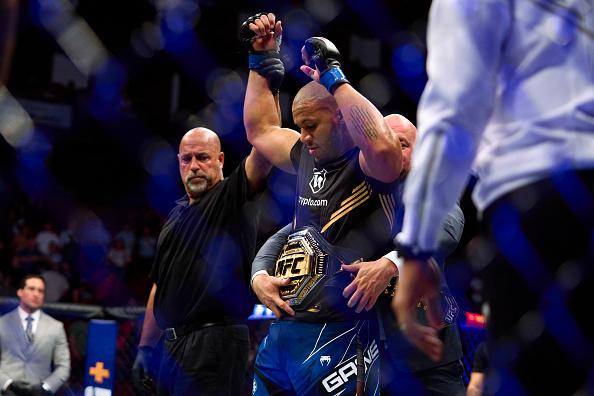 Ciryl Gane of France reacts after defeating Derrick Lewis in their interim heavyweight title bout during the UFC 265 event at Toyota Center on August 07, 2021 in Houston, Texas. (Photo by Cooper Neill/Zuffa LLC)

This isn’t a case of friends turned rivals battling it out in a heated grudge match; it’s the two best heavyweights in the world, who happen to be familiar with one another, going head-to-head for divisional supremacy.

Will the victory be a little sweeter for either man because of the friction between the two sides? Probably, but what matters most is getting to walk away and declare yourself the undisputed UFC heavyweight champion.