Eddie Cha Is Playing Chess At The Highest Level

Fight Ready Coach Eddie Cha Loves Everything About Preparing His Athletes For Every Challenge They Face Inside The Octagon.
By Thomas Gerbasi, on Twitter: @TGerbasi • Jan. 20, 2022

Do you want to be a trainer? It’s not all trips around the globe, free t-shirts and selfies in the Octagon. Just ask Fight Ready striking guru Eddie Cha.

“You have no family life, pretty much,” he said. “So having an understanding and unbelievable wife is honestly the secret, but it's hard to juggle both. It's not just me; it's our whole coaching staff. They're right there with me. We do team practices and then we gotta do these super camps. We call them super camps because we invest so much time and money and effort into them. So it's hard to juggle but it's definitely worth it and I think that's how we build the bond, relationship and rapport with these guys. When you spend eight-plus weeks, six hours a day and getting into the innermost secrets and demons and so forth, you share that bond.”

The latest super camp for the Arizona squad is for former UFC flyweight champion Deiveson Figueiredo, who will attempt to regain his crown this Saturday in Anaheim when he faces Brandon Moreno in the trilogy fight that serves as the co-main event of UFC 270. It’s another road trip, another fight week, another pressure-filled fight night. But it’s everything Cha always wanted when he was building his All In MMA gym and rep back in Southern California.

“When I was starting out in Southern California, I opened up a gym and I picked up some really good fighters at that time, and I could never get a break on getting some of the bigger names,” Cha recalls. “I'm like, why can't I get these guys? And eventually, I just said, forget it, the guys that I have, I'm gonna build them the best I can and that's pretty much what I did and how I got started. I started with Francisco Rivera, he won six straight (three in the UFC), got to the Top Ten, and he was pretty much my first ace. And then I worked with Bobby Green, Darrion Caldwell, Dominick Reyes, Alex Reyes and a bunch of other guys.”

Enter former UFC lightweight champion Benson Henderson, who heard about Cha and reached out along with longtime MMA LAB coach John Crouch. Soon after, Cha moved out to Arizona.

“And the rest was history,” he laughs.

Still in Arizona and now working with the Fight Ready team in Scottsdale, Cha is still not a fan of the blistering heat, but he got his wish to work with the elite of the sport, with Figueiredo, Zhang Weili, Chan Sung Jung, Henry Cejudo and Jon Jones just a few of the names he’s worked with over the past few years. And why has his system worked with such a diverse crew?

“A lot of coaches will have their system and then apply it to every fighter, whether it be a flyweight or a heavyweight,” Cha explains. “For me, what I like to do is, whatever they do well, you just want to make it a little bit better. That's where you see the fast-track result. And then there's a long-term result where, hey, this is gonna take some time, but we need to develop a check hook or your lead hand is not as good for this or that, or your footwork's not up to par yet. So I try to set short-term goals and long-term goals, because long-term goals are great if you're starting out early in your career, but some of these guys are already Top Ten or Top Five in the world and they don't have that kind of timespan - they need immediate results. So some days we work on hand speed, some days we work on maximizing our power, some days we work on just Fight IQ. And it's a whole long process but, for me, I just try to adapt to their style a little bit more than force them to adapt to my style.”

That’s just in the gym. What really matters is taking that work and applying it in a fight. At the highest level of MMA. With the lights shining brighter than they ever have. Yeah, that’s pressure, and Cha knows it’s there. But he also embraces the joy that comes with seeing one of his fighters pull off something he taught them in a place far removed from the spotlight.

“It's probably the best feeling in the world because you see a part of you in it,” said Cha. The biggest thing is that they actually trust you enough to throw that combination when you call it or trust the game plan. If it doesn't work, you're gonna be the one to blame. If I call to throw a jab-cross and their opponent counters that jab-cross and they get knocked out or lose, that's my fault. So everything that I try to call and the coaches try to call, we always make sure we're making the right decisions. We have to be on our top game, as well, because if we're not, they're gonna lose out there or more importantly, get hurt.” 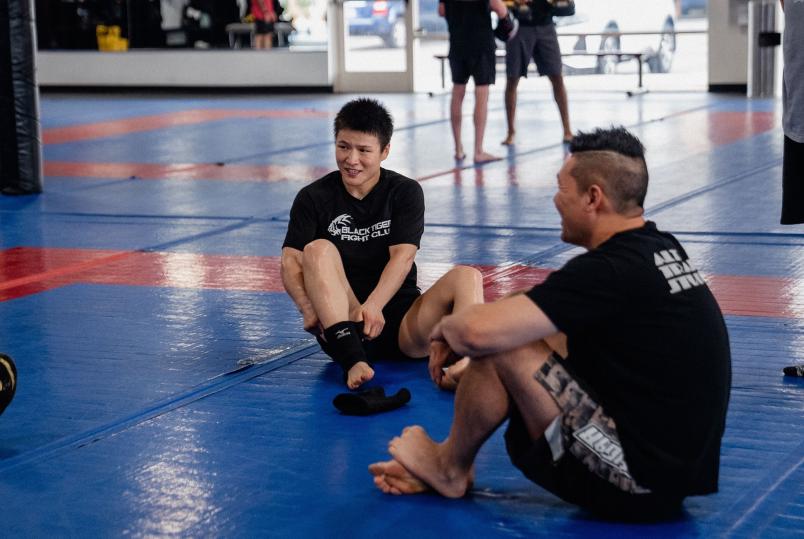 It all goes back to those long days in the gym when coach and fighter exorcise the demons and doubts that come with the fight game. And with Cha being a hands-on coach who doesn’t just sit on a stool and shout out instructions, the fighters he brings into battle know that when all is said and done, he’s not a guy picking up a paycheck, but a friend and teacher who has prepared them and has sacrificed just like they did. That’s important.

“I think it's just a different feel,” he said of his approach to training fighters. “I like to move a lot. Some coaches kinda stand still and do it. I feel like you could get a lot of that work on the bag, but I'm trying to emulate the guy, so if we're fighting guys that move, I gotta move. If they're fighting southpaw, I hold in the southpaw stance. So I’m trying to emulate that stance, the feel of catching them in, kinda staying right in the pocket directly, trying to show the correct body mechanics, and I feel like if I can't do it myself, I just go crazy. I don't feel like I get the same results.”

“Oh, it's bad,” Cha laughs. “Just recently I had to get an MRI on my elbow, and every kickboxing / boxing coach I talk to, they've had elbow surgeries, shoulder surgeries. I've been fortunate enough - I'm almost 50 now - and I've never had surgery on my shoulders or elbows. But I might be close to my first one.”

If it goes in that direction, expect to see Eddie Cha back in the gym as soon as possible. It’s just who he is.

“Every day is hard but, at the same time, it's fun,” he said. “It's definitely a challenge. We're playing chess at the highest level. How can we figure this guy out? It's definitely a lot, but when you win, it's all worth it.”