Deiveson Figueiredo: 'No Pity, No Mercy'

Deivesion Figueiredo Is As Motivated As Ever Heading Into A Third Fight With Brandon Moreno At UFC 270
By McKenzie Pavacich, on Twitter @mpavacich_ • Jan. 20, 2022

12 minutes and 26 seconds into his championship rematch with Brandon Moreno at UFC 263 in June, Deiveson Figueiredo had to make an impossibly difficult decision. Three light taps on his opponent’s leg ended their second meeting inside three rounds, and in a simple matter of seconds, his life changed.

Figueiredo got up and walked calmly to his corner as Moreno stood in the Octagon in disbelief of the moment that would etch him into the history books as the first Mexican-born UFC champion.

And when referee Mike Beltran raised Moreno’s hand to the tune of Bruce Buffer’s “and new” and encouraged the two to shake hands, Figueiredo embodied true sportsmanship by instead hugging and lifting up Moreno and the belt that used to belong to him.

“This fight, I don’t like to watch,” Figueiredo said through a translator, his frustration palpable. “I feel hate for this guy every time I watch it.”

Gone is any public-facing sense of compassion or respect between the former flyweight champion and the incumbent, who will go toe to the line for the third time in 13 months at UFC 270: Ngannou vs Gane. 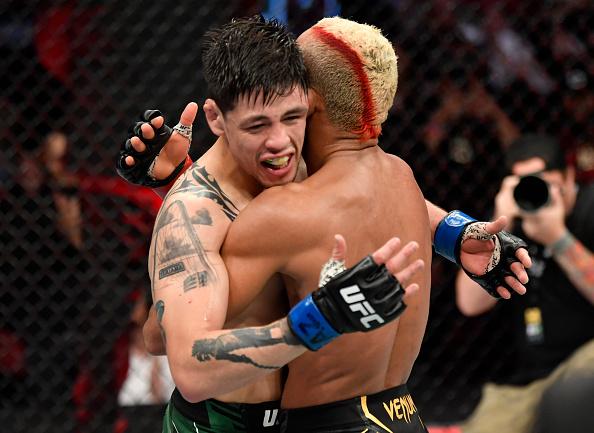 Brandon Moreno of Mexico and Deiveson Figueiredo of Brazil hug after their UFC flyweight championship fight during the UFC 263 event at Gila River Arena on June 12, 2021 in Glendale, Arizona. (Photo by Jeff Bottari/Zuffa LLC)

It’s nothing to be said of Figueiredo’s character, rather just the way things must be in the fight game.

“I’m that guy who comes in to finish off his opponents. I am not friends with my opponents.”

The history between “Deus da Guerra” and the “Assassin Baby” makes it a little easier for Figueiredo to view Moreno as not only an opponent, but a true enemy as well.

Following his second career loss, and first loss by finish, the 34-year-old returned to his home empty handed while his opponent was welcomed with all the glory that comes with being a champion. It’s a feeling Figueiredo never wants to experience again, which makes him all the more eager to rid the taste in his mouth and take back what he believes is rightfully his.

“I just went home, lifted my head, and decided to make changes in my life. And I did,” Figueiredo said. “I left my team. I left Brazil. I'm with a new team and now I'm more focused, more determined, and I'm definitely going to be the owner of the belt.”

Figueiredo made the decision to trade in his rural, coastal home of Soure in the State of Pará, Brazil for the landlocked desert city of Scottsdale, Arizona — a place with a population ten times the size of his home, sitting a stone’s throw east of the fifth-largest city in the United States.

Apart from the desire to regain his throne, the one thing that would drive Figueiredo nearly 5,000 miles away from his home and family is someone who has just as much, if not more, history with Moreno; something he found in former two-division UFC champion Henry Cejudo.

“I look to be among champions,” Figueiredo said of the biggest reason for his complete overhaul of his team and training camp. “Cejudo is a role model for me.”

Cejudo’s history with Moreno extends back to 2016, when Moreno helped Cejudo prepare for his first title shot against Demetrious Johnson. The two would grow to become close friends, with Moreno even going as far as living with Cejudo in his Phoenix home, before a mistake made by Cejudo on the 24th season of The Ultimate Fighter drove a wedge between the two.

The story of a two-sided betrayal has become a hot topic during this fight week, but the abridged version ends with Moreno choosing to work with Joseph Benavidez — his coach on The Ultimate Fighter — in preparation for the longtime contender’s fight against Cejudo.

Now, “Triple C” returns the favor, offering not only his experience as a decorated champion, but his expertise on Moreno’s genetic makeup as a fighter, as well. 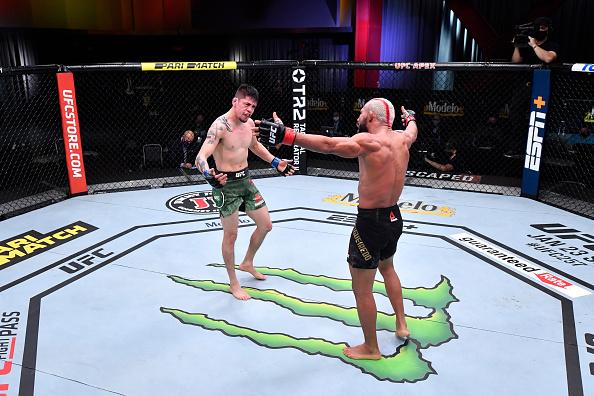 “Working with him, you realize how smart he is, how easy the fight could have been if I followed a gameplan like the one I have,” Figueiredo said. “There were imperfections present in the last fight. You can be sure I’ve corrected those mistakes with this gameplan. I’m going to be more technical, quicker and more explosive. I’m ready to finish him.”

With a decisive gameplan and a strong handle on his biggest nemesis outside of the Octagon in weight cutting, Figueiredo is confident that the sacrifices he’s made will pay dividends.

“It has been very hard, but now the focus is on the fight. I trust the people who are working with me a lot and I'm going to make the weight. I'm here, happy and giving an interview,” Figueiredo said, laughing during his fight week interview with UFC.com in Anaheim—something we rarely see.

“I was always angry in interviews and today, I'm fine, I'm healthy. On Saturday, I'm going to knock him out and take the belt as a gift to my son in Brazil. I'm determined. It's time to beat him and go home. It's the only thing on my mind. It's been so many months focused on this guy. I'm already fed up with him.” 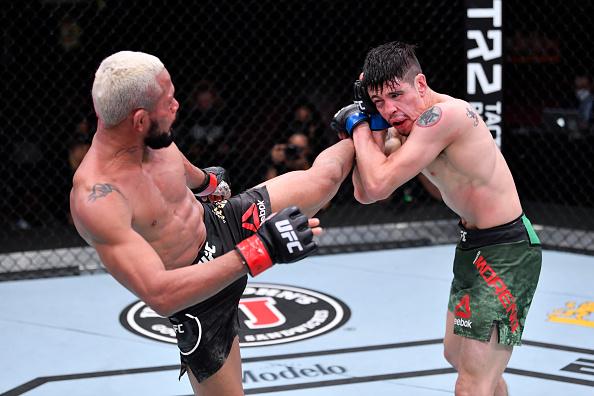 Fueled by an intensity that befits the man whose nickname translates to “God of War,” Figueiredo has made it clear that he intends to leave it all in the Octagon Saturday to ensure “and new” is read off the scorecard once again.