Last March, Francis Ngannou claimed the UFC heavyweight title with a second-round stoppage victory over Stipe Miocic in the main event of UFC 260.

It was a full-circle moment for the fighter from Cameroon, who previously challenged the Cleveland native for the heavyweight strap three years earlier at UFC 220 in Boston, losing the fight by unanimous decision.

“The rematch against Stipe went exactly how I thought it would go,” began Ngannou, who competes for the first time since ascending to the heavyweight throne on Saturday, facing off with French interim champion Ciryl Gane in a title unification bout that headlines UFC 270. “Fighting Stipe the first time, I knew exactly who he was. I lost our first fight, but I knew I could figure out the puzzle. I knew that he was tough, I knew that he had endurance, I knew he was patient, good Fight IQ.

“I knew that if I went there and was very calm, don’t rush, there was no way I was losing that fight. My only problem was how to calm down; that was one of the biggest things I was reminding myself. I could see that Stipe was waiting for me, and I never came. He didn’t understand in the first round, and I think his corner told him, ‘You have to push him because you’re losing,’ and then it happened.”

Out of the corner to start the second, Miocic was a little more aggressive, probing for ways to get inside and connect on the surprisingly patient challenger. Forty seconds into the frame, Ngannou lunged forward with a leaping left hand, knocking Miocic down along the fence.

The champion regained his feet quickly, but Ngannou remained in his face, hitting him with solid shots. Miocic retreated to reset, planted his back foot and put a right hand on Ngannou’s jaw, similar to the sequence that felled Fabricio Werdum and earned the Cleveland native the title for the first time. 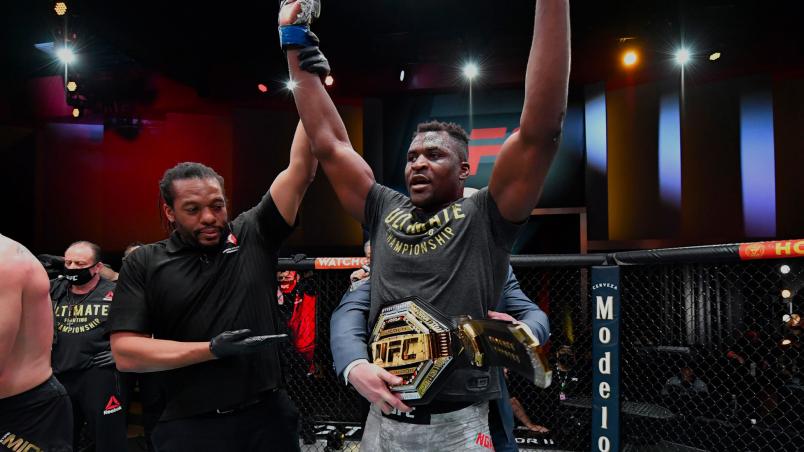 Instead, he steadied himself and hit the advancing Miocic with a clean left hook that stopped the champion dead in his tracks.

“It felt really good, but what made me really happy about that was the fact that it was against Stipe,” Ngannou said of his championship victory. “There was a part of me feeling like I could have become a world champion without fighting Stipe, but I wouldn’t feel like a complete champion.

MORE UFC 270: Fight By Fight Preview  | Fighters On The Rise

“If you ask me who is the best heavyweight out there — besides me, obviously — I would say Stipe. I knew that if I didn’t score that victory against Stipe, I wouldn’t feel satisfied as a champion. I felt like I’m a champion because I beat the champion himself.”

Now he’s set to defend his title for the first time against a formidable, and somewhat familiar foe in interim titleholder Ciryl Gane.

Each man was guided into mixed martial arts by Fernand Lopez, the leader of the team at Paris’ MMA Factory. Ngannou began his journey towards the end of 2013, reaching the UFC two years later, and facing Miocic for the first time a little over two years later. He relocated to the United States full time following that contest but continued to work with Lopez until the relationship became frayed and the duo went their separate ways.

Gane transitioned from Muay Thai and kickboxing in 2018, debuted in the UFC a year later, and claimed the interim title just few days after the three-year anniversary of his first professional fight, setting up this clash with Ngannou.

While they’ve been called “former training partners” in the build to this contest, Ngannou said that is true only in the loosest interpretation of the term.

“He came to The MMA Factory when I wasn’t there anymore; I was here (in Las Vegas) already. I went back at the end of the year, 2018, and he was at the gym already, but he was on vacation or something, so we didn’t even train together until January 2019.”

Gane’s side has presented a slightly different timeline of events, and there is some acrimony between Ngannou and Lopez that has become the lynchpin on promoting this clash of champions as a grudge match.

One interaction that has gotten a great deal of attention transpired at Madison Square Garden in November, when Lopez and Gane were in the corner of MMA Factory middleweight Nassourdine Imavov, who earned a victory over Edmen Shahbazyan that evening. The trio was backstage following Imavov’s win, waiting to do media, when Ngannou walked by without offering any acknowledgement, promoting social media to frame the interaction as a cold-blooded snub.

“I saw him, he was with Fernand,” Ngannou said when asked about the non-interaction. “Obviously, I don’t have any problem with Gane, and if it was just him, I would greet him, but he was with Fernand, who lately has been trying some nasty stuff with me, and I couldn’t just go there and be like, ‘Hey what’s up?’ like we’re bros, like nothing happened. 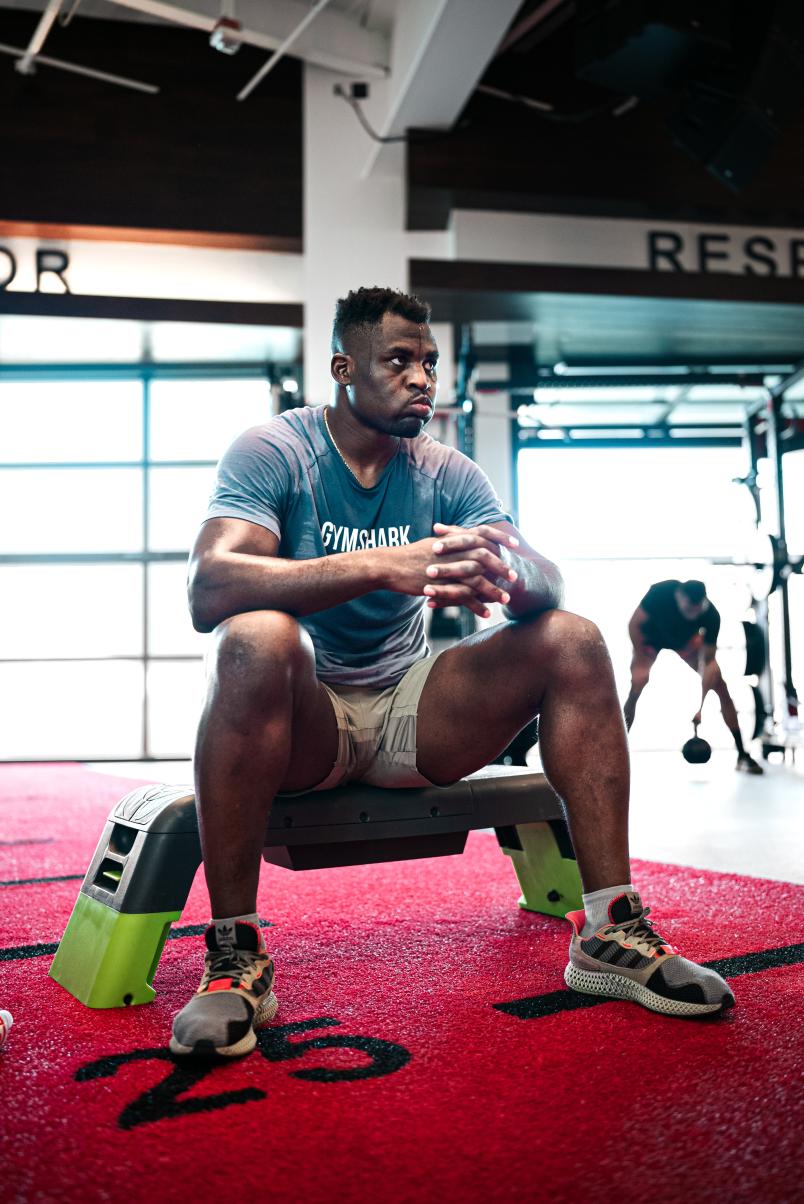 “The other part, I couldn’t greet Gane without greeting Fernand, and if I did, Gane would have a problem with Fernand, because it’s ‘you’re either you’re with me or against me’ with Fernand; you’re never neutral with him.

It’s clear that Ngannou feels no animosity towards Gane, both from his explanation of the UFC 268 encounter and the way he speaks about the undefeated interim titleholder, even if he does take umbrage with the belt his opponent will carry into battle this weekend.

“It was clear that was a bad matchup for Derrick Lewis because he wasn’t going against someone that was going to stand and bang with him; there was nobody there to bang with. As soon as I saw him take those low kicks, I was like, ‘This fight is over,’ and obviously the victory came from there.

“At the end of the day, I’m the champ,” he added. “Even when the reason behind that interim title is right, it’s still just an interim title. We all know the definition of interim, which is while the champ is not there, so it’s like No. 2, which is No. 1 contender.”

On Saturday night in Anaheim, Ngannou fully intends to remind everyone that he’s the true alpha in the heavyweight division.

“Same as the others: me knocking Gane out,” he offered when asked how he sees the UFC 270 main event playing out. “I want to think of another way, but I know, and he knows, and I know he knows.

“The good thing is that over the past few years, I’m really trying to work on my skills as a fighter, but even though they said I have power, I keep getting more power and keep getting stronger, and there is only one thing that can happen if I connect with him.

“I think I will knock him out — 70 percent knockout, 30 percent submission; that’s my prediction,” added Ngannou. “But everything stays the same: the champ remains the champ.”