Three Can't-Miss Combatants To Watch For On Saturday's Return To Anaheim
By E. Spencer Kyte, on Twitter @SpencerKyte • Jan. 18, 2022

The first pay-per-view event of 2022 is an absolute behemoth; a collection of interesting, competitive fights with the flyweight championship trilogy bout serving as the co-main event and the heavyweight title unification clash between Francis Ngannou and Ciryl Gane closing out the show.

Honestly, this is one of those cards where you could offer me those two championship pairings on pay-per-view and I would buy it in a heartbeat, as each of those fights contains so many different layers of intrigue and division-shaping possibilities, while also having the potential to play out in so many different directions that they alone are worth the price of admission.

And that’s what makes the rest of the fight card and the opportunity to catch an assortment of newcomers and emerging competitors stepping into the Octagon ahead of the twin title fights so appetizing. It’s like spending the afternoon nibbling on delicious tapas offerings and picking at a deluxe charcuterie board before sitting down to an outstanding two-course meal, where the flyweight clash between Brandon Moreno and Deiveson Figueiredo is the delectable appetizer with an Ngannou-Gane main course to follow.

Here’s a closer look at three of the non-title combatants with the potential to make an impact before the gold goes up for grabs at the end of the night.

This is the UFC 270 edition of Fighters on the Rise.

The undefeated featherweight prospect turns 25 the day before his meeting with Charles Jourdain on Saturday, and what better way to celebrate than by registering a fourth straight UFC victory, running your overall winning streak to a dozen and counting, and potentially punching your ticket to the Top 15, all in one fell swoop?

After impressing with a pair of victories in the final quarter of 2020, Topuria made just a single appearance last year, but he made it count, avoiding the awkward entries and curious attacks of Ryan Hall to knock out the Brazilian jiu jitsu specialist in the waning moments of the opening round.

It was an effort that highlighted Topuria’s IQ in the cage, as even though he’s a Brazilian jiu jitsu black belt himself and earned his first seven victories by submission, he largely avoided engaging with Hall on the ground for any real length of time. Instead, he extricated himself quickly whenever they got tangled up, landing whatever big shots he could in the scrambles before getting back to range and calling Hall up.

Late in the frame, as “The Wizard” dove for another weird entry, Topuria defended and dove in with hammerfists, catching Hall flush and sending him to defeat. Now he gets an early start on his 2022 campaign with an intriguing short notice pairing with the always game Jourdain.

The 26-year-old French-Canadian earned a unanimous decision victory over Andre Ewell on the final card of 2021, inked a new deal, and quickly raised his hand to replace Movsar Evloev when the undefeated Russian was forced out of this contest. He’s had his best moments in his biggest fights, and this one should be no different.

Should Topuria emerge victorious on Saturday, he’ll take another step forward in his career and add his name alongside Arnold Allen and Bryce Mitchell as the top young talents climbing the featherweight ranks at the moment. Jourdain is a formidable fill-in opponent and a solid test, so Saturday’s contest should provide more insights into where the streaking Georgian fits in the overall divisional hierarchy. 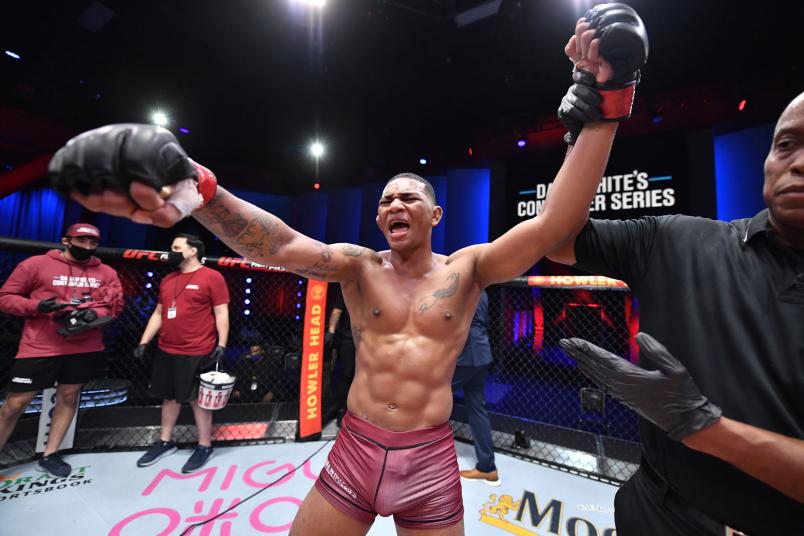 One of three fighters representing Tijuana’s Entram Gym on Saturday’s fight card, Morales was one of the most promising fighters to emerge from Season 5 of Dana White’s Contender Series last year.

Just 22 years old, the tall and rangy welterweight is already 12-0 as a professional, running his winning streak to a dozen and earning his contract with a unanimous decision victory over Kazakhstani veteran and Kings MMA product Nikolay Veretennikov, who was coming off a first-round knockout win over UFC vet Anthony Ivy. It was kind of performance that showcased the abundant upside Morales possesses — a quality victory in his first real test against a seasoned opponent, where he needed to navigate some challenges and fight within himself in order to secure the victory and his UFC deal.

Now primed to make his promotional debut, the emerging welterweight from Ecuador gets a chance to make an instant impression right out of the chute as he squares off with former middleweight hopeful Trevin Giles on Saturday’s prelims.

Giles won his UFC debut at light heavyweight in the summer of 2017, and then moved down to middleweight for his next seven appearances, posting a 4-3 record while taking 18 months off early in that run to enroll in and graduate from the police academy in Houston. After getting stopped by Dricus Du Plessis in his second outing of last year, he set his sights on the 170-pound ranks, where he’ll stand opposite Morales this weekend.

This is an outstanding measuring stick matchup for the UFC newcomer — a date with an eight-fight veteran and former prospect that has flashed power and is an intriguing addition to the division in his own right. Should Morales successfully pass this test, it will establish an immediate baseline for where he stands in the weight class and set him up for a potential accelerated rise going forward. 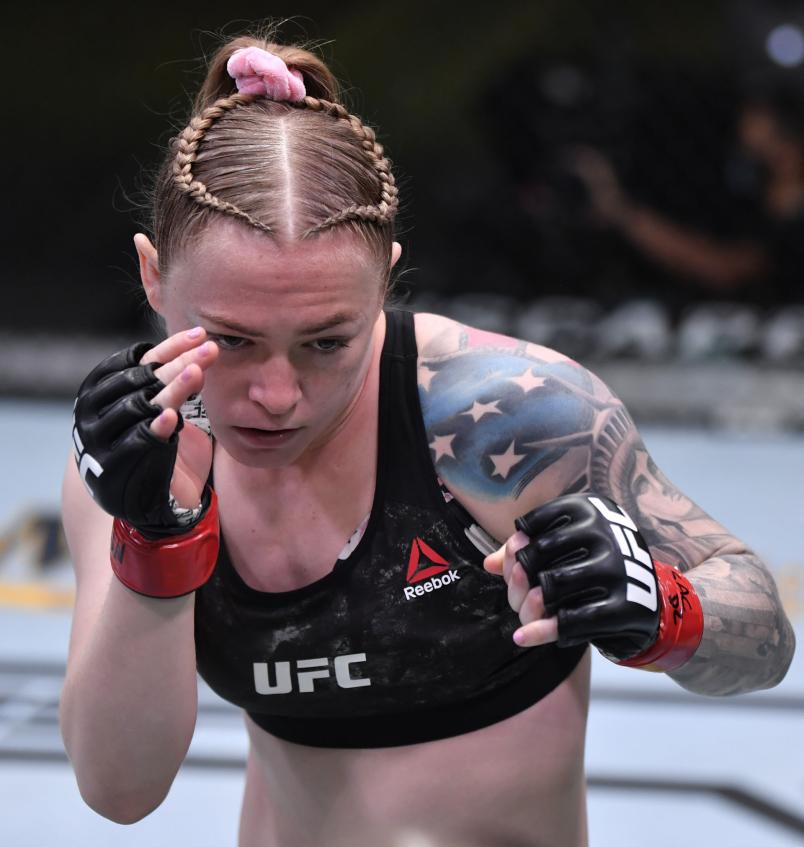 It’s odd to think of a 22-year-old prospect as a somewhat forgotten figure in any division, but the crush of young talent that burst onto the scene in the flyweight ranks last year coupled with Hansen taking a year to deal with some personal health issues has set the Californian in that position ahead of her return this weekend.

Hansen started getting noticed during an eight-fight run under the Invicta FC banner that produced a 5-3 record, including a come-from-behind, last-second submission win over Sharon Jacobson. She arrived in the UFC in the summer of 2020 and impressed right out of the gate, collecting a third-round finish of former Invicta atomweight titleholder Jinh Yu Frey before dropping a close decision to fellow youngster Cory McKenna later in the year.

After withdrawing from a matchup with Cheyanne Vlismas in March for undisclosed reasons, Hansen opened up later in the year about battling an eating disorder and the punishing effects it had on her body. She spent the year addressing the issue, and while it’s a work-in-progress situation like any other type of recovery, Hansen is in a much better place now and ready to make her return to the Octagon.

How To Watch UFC 270 In Your Country

She’ll do so at home on Saturday against former CFFC title challenger Jasmine Jasudavicius, a 6-1 Canadian who claimed a spot on the UFC roster with a hard-fought decision win over Julia Polastri on Dana White’s Contender Series in September.

The pairing with Jasudavicius is a prime opportunity for Hansen to instantly inject herself into the conversation with the likes of McKenna, Miranda Maverick, Maycee Barber, Erin Blanchfield, and 2021 “Rookie of the Year” Casey O’Neill as part of the impressive collection of talented, young talents working their way up the flyweight ranks.

Hansen profiled as one of the top prospects in the UFC prior to last year’s sabbatical, so it shouldn’t surprise anyone if she reclaims that title with a strong showing on Saturday night in Anaheim.