Joanne Wood 'Buzzing' To Be Back In The Octagon

A Quest For Redemption And A Wedding In The Middle Of A Fight Camp Combine For Unusual Circumstances That Have Joanne Wood Motivated In A New Way
By Maddyn Johnstone-Thomas • Nov. 19, 2021

When Joanne Wood explained the emotions she felt on her wedding day a little over two weeks ago, she compared it to what she feels on fight day. The buzz and excitement from that special day are still surrounding Wood and she’s carrying that energy into Saturday.

“It’s fight week and I’m buzzin’, which is not normal; I’m usually not this excited,” Wood said. “I’m grateful I had support around me to take stress off, planning the wedding in the middle of fight camp. I loved the experience of getting married; it felt like fight day on the wedding day, it was crazy. I feel excited. Me and John both joked that we should get divorced so that we can get married again because we loved it so much. We might do this every camp.”

The last time fans saw Wood inside the Octagon was earlier this year at UFC 263, when she faced flyweight Lauren Murphy. Wood fell to Murphy by split decision, while Murphy took the victory and went on to face UFC women’s flyweight champion Valentina Shevchenko at UFC 267.

And while the loss stung, considering how close Wood came to a title shot, she isn’t dwelling on it and knows that it is now a matter of when, not if.

“It’s going to happen when it’s going to happen,” Wood said. “I’ve been so close a few times. It’s kind of a letdown when you’re like, ‘Geez, I’ve let all of the people that thought I was going to be next down.’ Myself, my team, it’s a lot of burden to carry. Now, I’m just like, it’s going to happen. I just need to concentrate on getting back to the win column and putting on a good performance.”

This weekend at UFC Fight Night: Vieira vs Tate, Wood will fight at the UFC APEX for only the second time in her career. The Scottish fighter is known for feeding off the crowd’s energy that comes in sold-out arenas worldwide. The last time she fought in the APEX was August 2020, with no fans.

This time around, there will be a handful of fans cheering her on, and even though it won’t be in a large arena, she still knows how much it will benefit her.

“I just need noise and I need support. Just to hear the crowd makes a world of difference,” Wood said. “I’ve also been here as a fan watching fellow teammates fighting, so I know the atmosphere. I know what to expect, so I’m looking forward to coming in, and even though it’s not going to be very much or in an arena, I know it’s going to be that extra noise that makes me want to dig in there deeper.” 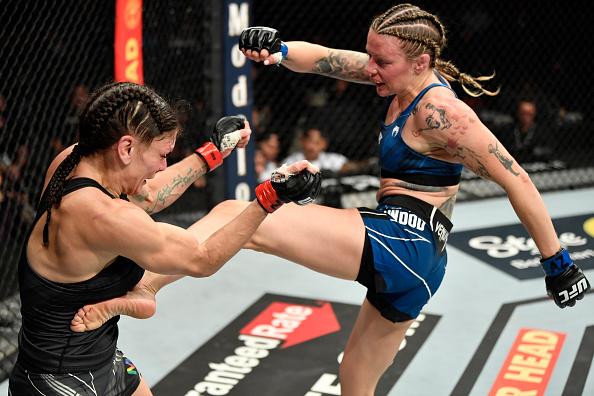 Joanne Calderwood of Scotland kicks Lauren Murphy in their flyweight fight during the UFC 263 event at Gila River Arena on June 12, 2021 in Glendale, Arizona. (Photo by Jeff Bottari/Zuffa LLC)

Wood steps into the Octagon on Saturday for the third time this year to face the number 10 ranked flyweight in the world, Taila Santos. Two and half years into her UFC career, Santos has compiled an 18-1 record and is currently on a three-fight win streak, with 10 victories by knockout and two by submission.

Santos’ record or win streak doesn’t faze “JoJo” at all.

"I know she’s a great fighter and stuff, but I’m confident that I’ve been in with stronger and better opponents than she has. I take that confidence from looking at her as a fighter and her stats.”

For Wood, things were clicking on all cylinders during this training camp at Syndicate MMA in Las Vegas. Getting married in the middle of camp didn’t distract her from the goal and mindset that she has going into Saturday’s matchup. 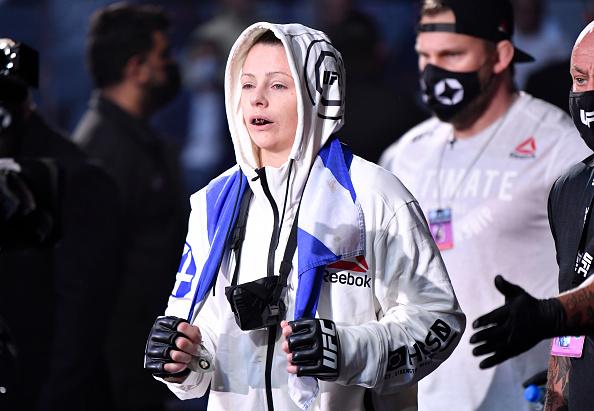 “I know I’m going to go in there and not leave until I win,” Wood said. “You never know in this fight game, but that’s my mentality right now and I’m going to do whatever it takes and make it as exciting as I can, but also know that I’m there to win.”