Records Are Waiting To Be Broken As Rani Yahya Steps Into The Octagon For His 40th Professional Fight
By McKenzie Pavacich, on Twitter @mpavacich_ • Nov. 16, 2021

When Rani Yahya enters the Octagon this Saturday for his 40th professional fight, it will be as an entirely evolved fighter, but more importantly, as a fighter who has “nothing to prove.”

When you look back at a career that began well over a decade ago — and shows no signs of slowing down anytime soon — it’s hard not to agree with him.

The 37-year-old has tested himself against some of the best athletes the sport has had to offer across three weight classes and resides within the UFC record book for a number of different milestones. 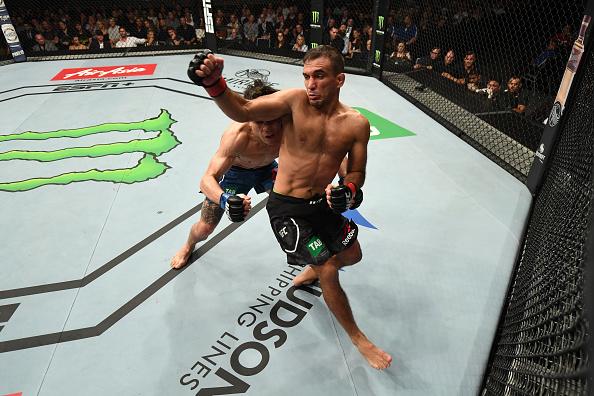 Rani Yahya of Brazil lands a spinning elbow against Ricky Simon in their bantamweight bout during the UFC 234 at the Rod Laver Arena on February 10, 2019 in the Melbourne, Australia. (Photo by Jeff Bottari/Zuffa LLC)

“I feel proud of myself to do this; many moments I wanted to reach higher and achieve goals I had in the past that I didn’t achieve, but I’m still here,” Yahya told UFC.com in his fight week interview. “I’m happy for that and I’m still improving, still learning and I still have goals that I want to achieve and pursue, so I want to keep going.”

A goal sitting on the front line of his thoughts is securing yet another win by submission — which would bring his running career total to 22 — to surpass Urijah Faber for most UFC bantamweight submissions.

“It’s important. It’s something that I look forward to getting, for sure.”

It’s a tall task, even for a submission specialist like Yahya, especially when you consider his opponent, Kyung Ho Kang, is riding a three-fight win streak and has eleven career submissions of his own.

Check Out The UFC Record Book

Stats like these, however, are something the 2nd degree Brazilian jiu jitsu black belt pays little attention to.

“I had a three-fight, even four-fight winning streak before. I don’t think there’s anything pretty big about that, you know?” Yahya said of the last three wins Kyung Ho Kang has strung together. “I think he’s a tough opponent, I respect him, but I’m much more dangerous than him. I finish way more than him, and that will make a big difference in the fight.” 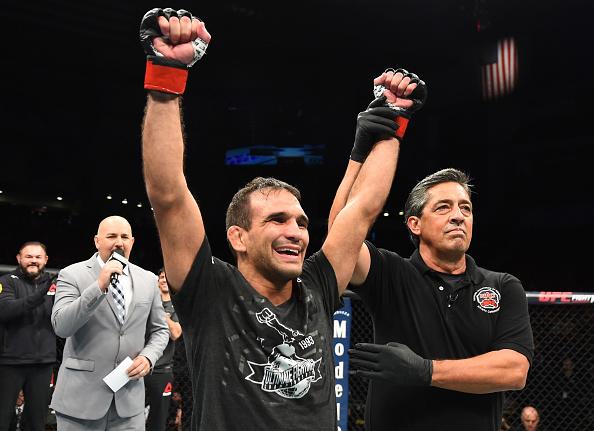 Rani Yahya of Brazil celebrates after his submission victory over Luke Sanders in their bantamweight fight during the UFC Fight Night event at Pinnacle Bank Arena on August 25, 2018 in Lincoln, Nebraska. (Photo by Josh Hedges/Zuffa LLC)

While Kang poses an evenly matched challenge against the Brasília native, boasting a few records of his own like second-most control time in the bantamweight division, just behind former champion TJ Dillashaw, Yahya is confident that no matter what Kang’s gameplan is, it will be a mistake.

“I think he will engage and try to fight on the ground or standing. Wherever he takes the fight, it will be beneficial for me,” Yahya said. “If he wants to strike with me, he’s going to be surprised. If he’s going to the ground, there’s nothing really that he can do to surprise me. I have many more finishes than him, almost double. I have many more tools to finish this fight.”

After dropping a unanimous decision to Ricky Simón in 2019 and fighting to a majority draw with Enrique Barzola in front of his home crowd in 2020, Yahya realized he needed to hone his focus and motivation during fight camp, bringing his training back to square one.

“After that draw, I felt that I could do much better than I did. I felt that I kind of let that draw happen and I felt very bad inside,” the bantamweight said. “That hurt me a lot, that result, so I kept myself very motivated to train to fight again, and I trained the whole year, the entire year of 2020, during the pandemic, getting ready and evolving.”

The evolution seemed to pay dividends, as Yahya made his return to his familiar ways, exactly a year following his draw with Barzola, with a second-round submission victory over Ray Rodriguez in March.

But Yahya wasn't quite past the challenges just yet, as this bout with Kang, initially scheduled to take place as the co-main event at UFC Fight Night: Hall vs Strickland in July, was postponed due to Yahya testing positive for COVID-19.

But now, with the recent setbacks pushed into the past by Yahya’s victory and a return to the Octagon slated for Saturday, the nearly 14-year WEC/UFC veteran can focus on the task at hand: to perform to the best of his ability on Saturday and, of course, maybe even break a few records.