Loopy Godinez Is Living By The Day

Loopy Godinez Is Loving Every Second Of Her UFC Journey And Is Thrilled To Be Back In Action At UFC Fight Night: Vieira vs Tate
By THOMAS GERBASI, ON TWITTER @TGERBASI • Nov. 19, 2021

Loopy Godinez’ post-fight conversations with her manager, Jason House, go a little something like this:

“Okay, it doesn't work like this. We have to have some time to sit and talk and talk to the matchmaker.”

Godinez laughs but doesn’t apologize for her eagerness to fight as much as humanly possible.

“I'm a little bit of a pain sometimes, but I just love this so much,” she said. “I'm living the life. I feel amazing, I'm healthy, so if I can do it every weekend, why not? I'm not cutting a lot of weight, I'm healthy, I'm happy, and everything in my life is so good that it allows me to keep living the dream.”

On Saturday, Godinez will step into the Octagon for a modern-day record third time in 43 days when she faces Loma Lookboonmee in the UFC APEX that has become her second home considering that all three of her previous fights have taken place in the Las Vegas venue. Maybe she should start looking to find a house in the fight capital of the world given how much time she’s been spending there since her debut in April.

Then she’ll really be in trouble.

It’s Tuesday of fight week and Godinez in a remarkably good mood for someone about to get into a fistfight in a few days. But that’s the life of someone who may go from being the female version of Donald Cerrone to Cerrone being the male version of Loopy Godinez. She truly wants to be here, fighting as much as she can, and when I tell her about middleweight boxing legend Harry Greb, and how he fought 45 times in 1919, Godinez says, “I gotta break that record.” 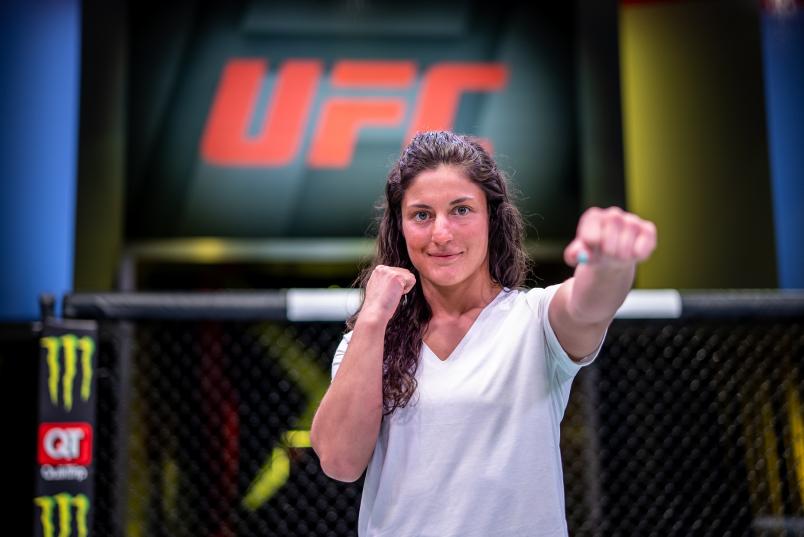 That may be one even too much for Godinez to pull off, but as she straps on the gloves for the fourth time in 2021, she appreciates all the attention she’s getting, but believes it’s not that big of a deal for her, personally.

“I'm like, well, I'm doing what I love,” she said. “Whoever knows me, they are like, 'Of course she's going to be doing this.' If you know me, there is no surprise, my personality is like that. So it's really cool what is happening around me - all the attention, all the media, all the fans - everything is just so amazing and I love it, but I'm not here fighting for that reason. I'm here fighting because I love it so much and that's just who I am and what I do every day. I train every day, so of course I want to fight.”

Since a controversial decision loss to Jessica Penne at strawweight in April, she offered to fight Sarah Alpar at bantamweight in May. That fight didn’t come off, but she did fight and beat Silvana Gomez Juarez back at strawweight in October, and a week later lost a hard-fought decision to Luana Carolina at 125 pounds. This week’s bout is at her optimum weight of 115 pounds. But given her anyone, anywhere, anytime at any weight attitude, how far would she go for a prizefight? Featherweight?

“We have to be a little smart,” she laughs. “If I know that girl's gonna break my face and I'm not gonna be fighting for a year, then let's think about it and see what's on the table. But I know Jason House and the UFC will never do that to me. I feel like we are a team and especially Jason is going to take care of me. And he is taking care of me. I trust him and he knows. I told him, ‘This is my career, you do what you have to do and just tell me what to do and I'll do it.’” 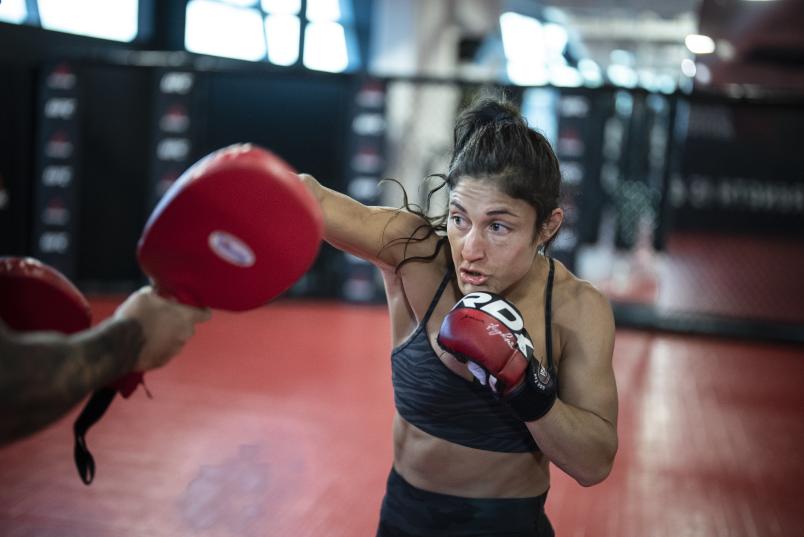 And this week, Godinez is back in Vegas, where she reveals the secret of why she keeps fighting here as often as she can.

Food from the UFC Performance Institute. Who would have guessed that? Not the glory, not the payday, but the food. Godinez seems to have it all figured out.

“I'm just living by the day,” said the 28-year-old. “Whatever happened yesterday stays in yesterday, and I just take what I can learn from it and make it better today. That's pretty much how I look at it. For me being better today, I'm gonna be better tomorrow and so on. That's pretty much how I live my life. I try not to worry about the past and I try not to worry about the future. Of course, there are things that stress me out sometimes, but I try my best to not to do that because there's no point. It's just life, and things happen and you fix them and keep going.”

Does she think she may be influencing a whole new movement of fighters who will now want to fight as often as they can?

“That's what they should be doing because that's our job, so sure, if they want to try it, they can try it,” Godinez said. “We are fighters for a reason. We are in the biggest organization - why not take advantage of it and why not enjoy it? That's how I look at it, and I love it.”

So should we expect to be seeing her in December?