Michelle Waterson: Aiming For The Top

Michelle Waterson's Short Notice Main Event With Marina Rodriguez Is Exactly The Type Of Challenge She Needs
By E. SPENCER KYTE, ON TWITTER @SPENCERKYTE • May. 7, 2021

The phone rang and Michelle Waterson had a decision to make: did she want to face Marina Rodriguez in a short-notice main event in a little over a week?

After halting a two-fight skid with a split decision win over Angela Hill in September, the 35-year-old veteran withdrew from a January date opposite Amanda Ribas in order to grieve and spent time with her family following the loss of two family members. She was replaced by Rodriguez, who halted her fellow Brazilian’s meteoric ascent up the strawweight rankings with a second-round knockout that allowed her to leapfrog both Ribas and Waterson in the rankings.

Now, a few months later, Waterson had a choice to make.

Watch Waterson In The Main Event Of UFC Fight Night

“There are opportunities that present themselves and it’s up to you to capitalize on those moments, to seize opportunities,” began the divisional fixture, explaining her thought process for accepting the assignment as she readies to face Rodriguez on Saturday night in Las Vegas. “Otherwise, it’s like those sushi trains where if you let something pass you by that you want to eat, you have to wait your turn until it comes back around.

Last fall’s victory over Hill was the necessary capstone to a shift in mindset for Waterson, who has been a fixture in the 115-pound weight class since joining the UFC roster following a championship run under the Invicta FC banner.

The Jackson-Wink MMA representative was part of the first card back following last year’s pause in the schedule as the global coronavirus pandemic brought activities around the world to a halt, squaring off against former champion Carla Esparza.

Down the stretch of the close, competitive affair, Waterson let off the gas a little, believing she was in control of the fight and on her way to a decision win, but while one judge agreed with her, scoring the fight 30-27 in her favor, another submitted the same score for Esparza. The third official also had the bout for Esparza, awarding her the final round and the victory.

“I had an uncomfortable feeling in my stomach when I walked away from that split decision with Carla and I know it’s because in my mind, I thought I was winning and I didn’t push the pace because I thought I had it in the bag,” said Waterson, who carries a 6-4 record inside the Octagon into her bout with Rodriguez on Saturday evening. “That’s my fault —I let that fight slip through my fingers.

MORE UFC FIGHT NIGHT:  Marina Rodriguez Is Dailed In | Neil Magny Takes Pride In His Work | Geoff Neal Is Only Focused on Winning | Diego Ferreira Coming Full Circle | Alex Morono Is Rising To The Occasion | Angela Hill Is Out To Prove What She Knows Is True

“I’ve never felt that way. I’ve never walked away feeling like, ‘Dang — I thought I really had this decision’ and I didn’t know whether I should be disappointed in my performance or if I should be upset with the judges about the decision. But at the end of the day, I lost, and I had to take inventory of that, see what it was that the judges saw that made them think that I lost and fix those things.

“And that’s the hardest part as a fighter — to have those introspective thoughts and continue to force yourself to fix those things.”

In addition to making technical changes and vowing never to let off the gas again, Waterson also adjusted her general outlook to her career and each individual fight.

A pro for more than 14 years, the perennial contender admitted there were times when she was so fixated on reaching the top of the mountain that she didn’t stop to appreciate the view from the various heights she’d already reached. 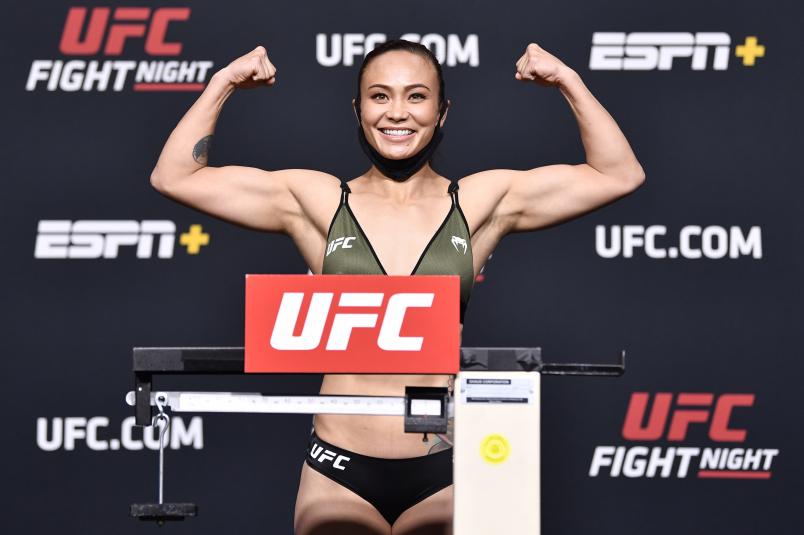 Michelle Waterson poses on the scale during the UFC weigh-in at UFC APEX on May 07, 2021 in Las Vegas, Nevada. (Photo by Chris Unger/Zuffa LLC)

“When you’re climbing the mountain, you’re in the zone and you’re focused on not tripping over the rocks in front of you,” began Waterson. “When you take a moment to stop and notice the view, that’s when you realize how far you’ve come.

“My last couple of fights, I’ve taken the time to embrace how cool what I do. There are times that I would zone out for the walk out or Bruce Buffer announcing my name, but how many people hope to hear Bruce Buffer saying their name? I’m getting goosebumps just talking about it.

“This last time, I’m in the Octagon hearing it all, Bruce is looking at me, ‘The Karate Hottie…’ and I’m saying it with him and it’s like, ‘Holy cow!’”

She laughed, recalling the excitement, and finally appreciating the experience.

Fully committed to enjoying the experience and back in the win column, Waterson knows she has a tough task in front of her this weekend against Rodriguez, who also landed on the wrong side of a split decision loss to Esparza in 2020 before getting back into the win column.

It was the first setback for the Brazilian Muay Thai stylist, who posted two wins and two draws in her first four appearances inside the Octagon and enters Saturday’s contest stationed at No. 6 in the strawweight rankings following her stoppage win over Ribas in January. 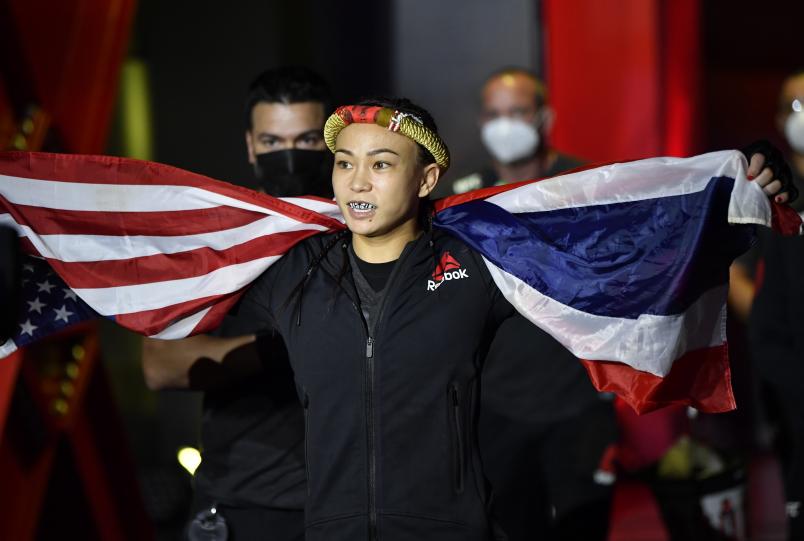 “There were moments in my career where I didn’t stop to smell the roses — to appreciate how fortunate I am to have this career, to do what I love,” she said. “And while it’s nerve-racking and scary, when I think about how life is so unpredictable and how there are so many things that are outside of our control, if I have the ability to say yes to a fight last minute, I’m going to do it.

“The ups and downs can be super-stressful, but that’s why we do it,” she added. “I would rather live a life of peaks and valleys than just living on the plains.”

A few weeks ago, prior to this bout coming together, Waterson shared another message on Instagram that also made the “career as mountain” analogy, with the quote in the image reading, “I’m always looking at the next highest mountain, setting new goals, and my success is always ongoing.”

Having already scaled a large portion of the strawweight mountain and poised to step into the Octagon for the first time this year on Saturday, the veteran fighter is locked in on that next peak and focused on achieving her next goal.

“The target for this year is to stay in the win column and to be a contender for the belt,” she said quickly when asked about the quote.

Just as she wasn’t going to let this opportunity go by the boards, there is no reason for Waterson to mince words either.