Marina Rodriguez: Dialed In On Winning

On The Heels Of Her First UFC KO, Marina Rodriguez Is Ready For A Main Event Clash With Michelle Waterson At UFC Fight Night: Rodriguez Vs. Waterson
By E. SPENCER KYTE, ON TWITTER @SPENCERKYTE • May. 5, 2021

Timing really is everything, in every sense of the word.

In mixed martial arts, timing is a crucial piece of translating opportunities into advancement, and the determining factor for whether a blow lands flush, is parried, or doesn’t land at all.

Marina Rodriguez has an acute understanding of the importance of timing, as this weekend, the Brazilian returns following her first stoppage victory in the UFC to headline Saturday night’s event at the UFC APEX on short notice opposite divisional stalwart Michelle Waterson.

“We had been in talks to compete in July, but the chance to main event and especially against a great name of the division is not something you can let pass,” explained Rodriguez, who lamented only competing once in 2020 and was looking forward to a more active schedule ahead of her UFC 257 encounter with Amanda Ribas. “It was a great opportunity that the UFC gave us, and we changed all the plans to compete a couple months ahead of schedule.” 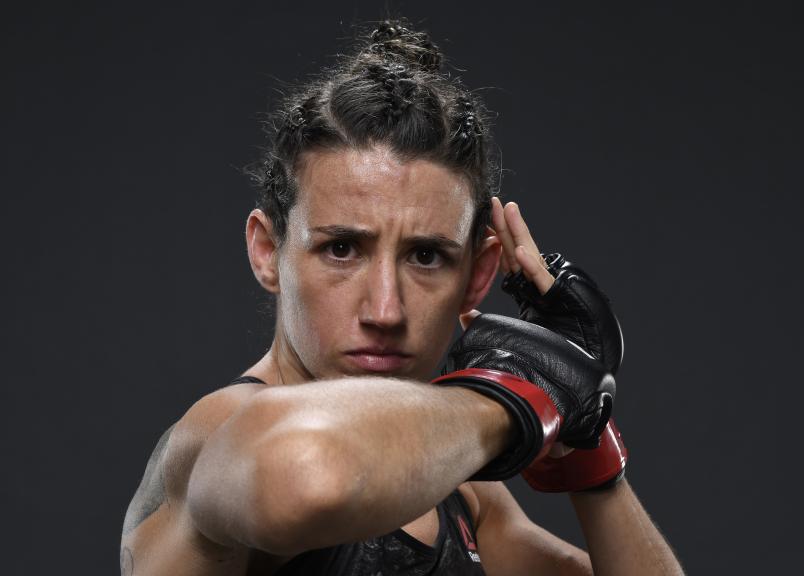 Marina Rodriguez of Brazil poses for a portrait after her victory during the UFC 257 event inside Etihad Arena on UFC Fight Island on January 23, 2021 in Abu Dhabi, United Arab Emirates. (Photo by Mike Roach/Zuffa LLC)

The 34-year-old Brazilian was in a complicated position in the 115-pound weight class coming into this year, as she sported a 2-1-2 record through her first five UFC appearances and hadn’t earned a victory since the summer of 2019. She’d established herself as a legitimate Top 15 talent, but where she fell in the hierarchy was hard to pinpoint as consecutive close battles with Cynthia Calvillo and former champ Carla Esparza seemed to spotlight a weakness in her game.

A Muay Thai stylist by trade, opponents have always sought to drag the action to the canvas when facing Rodriguez, and while she was aggressive and effective off her back in each of those contests, she still came away with a victory each time, continuing her streak of using her full 15-minute allotment each time she stepped into the Octagon.

But that wasn’t the case in January when she faced off with the streaking Ribas, whose effervescent personality and four-fight winning streak in the UFC had put her on the fast track to stardom.

After getting taken down and controlled on the mat for the majority of the opening round, Rodriguez was quicker to the trigger as Ribas came forward early in the second, planting a counter right hand on her countrywoman’s chin that sent her collapsing to the canvas. Follow-up blows came fast and furious, and following an awkward moment where it seemed like the referee had stopped the bout, but then directed the athletes to continue, Rodriguez clocked Ribas with several more clean shots that brought the bout to an end. 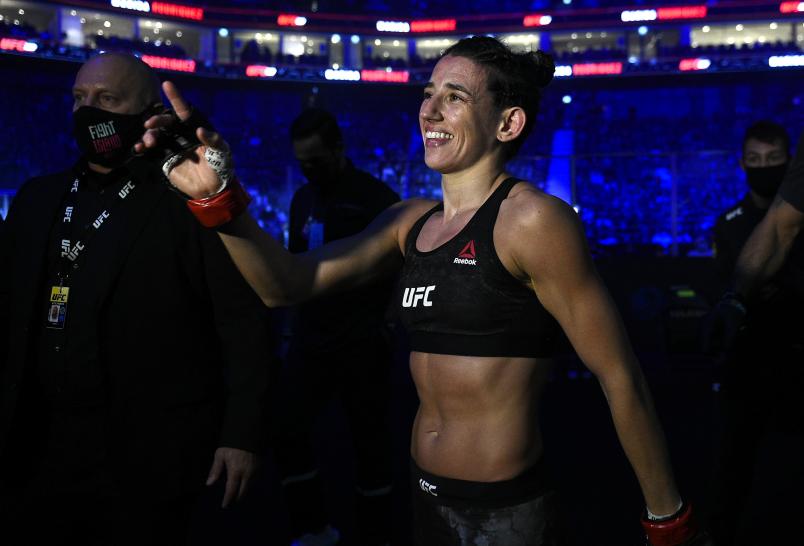 Marina Rodriguez of Brazil reacts after her knockout victory over Amanda Ribas of Brazil in a strawweight fight during the UFC 257 event inside Etihad Arena on January 23, 2021 in Abu Dhabi, United Arab Emirates. (Photo by Chris Unger/Zuffa LLC)

“I knew that sooner or later I would get my first KO in the UFC,” said Rodriguez, who enters her first main event matchup with a 13-1-2 overall record. “My coach, Marcio Malko, has been telling me since my first fight, ‘Marina, when you have around 15 fights under your belt, you will start to see things differently; you will start to see the right openings and the right placement for the strikes and you will get more finishes.’

“And that is exactly what happened!”

Coming off such an impressive victory and standing on the cusp of the Top 5 in the talent-rich strawweight division, it would be understandable if the emerging Brazilian contender opted against a last-minute assignment against a veteran like Waterson, who is currently stationed three spots behind Rodriguez in the Top 10.

But the biggest concern for the talented contender fighting out of Florianopolis wasn’t the risk-reward balance of facing someone positioned below her in the rankings or sharing the Octagon with a seasoned competitor with nearly twice as many fights in her career; it was the prospect to trying to make the 115-pound weight limit on such a condensed timeline.

“We had thought about fighting Waterson before because she would definitely be someone that would help me develop my game inside the Octagon,” said Rodriguez, explaining the decision-making process that brought this weekend’s main event together. “The main hesitation with this bout was the weight, as making strawweight in two weeks — even if I was able to make it, would severely hinder my ability to perform at the level I want to show the fans.

“So when the option of fighting at flyweight presented itself I jumped on it.”

Now that she’s no longer worried about her weight, Rodriguez’s sole focus heading into Saturday is keeping herself calm and not getting too deep into her own thoughts as she readies to make her second appearance of 2021 on Saturday night.

Being familiar with what Waterson brings to the table and having envisioned fighting her in the past certainly makes readying for this weekend’s encounter slightly easier, but for Rodriguez and her team, it’s rarely about the specific fighter standing across from her on fight night, and more about being prepared for anything and everything that comes her way once the Octagon door closes.

And she knows she is ready to add another victory to her resume this weekend.

“We always prepare as if I was going to face the best the division has to offer,” Rodriguez began, assessing Saturday’s matchup and how she sees things playing out. “We always prepare ourselves to be ready for anything we can possibly face in the bout, and in Waterson's case, even though she has a well-known game, we still prepare for the unexpected.

“When fight time comes, I will always have an answer to anything I have to face,” she added. “I am very confident that I can find the timing to get a KO, but it will depend a lot on what she will offer me in the fight.

“If she happens to want to grapple, I am ready for that too and I am confident I can surprise her with a submission there or maybe even before we hit the mat.”

After enduring a challenging 2020 where she only competed once for the first time in her career, Rodriguez was excited to get an early start on her 2021 campaign in January.

Now coming off the biggest win of her career, she’s ready to turn her first headlining opportunity into the fight that propels her into title contention, and she envisions her third appearance of the year coming against another of the top contenders… or the new two-time champ if no one else wants to face her.

“After winning this fight, I believe I am very close to a title shot,” offered Rodriguez. “I might have to beat one of the Top 3 first — Yan (Xiaonan), Joanna (Jedrzejczyk), or Zhang (Weili) — but it depends a bit on who the next challenger will be; that will determine quite a lot about my near future.

“But if none of them are up to fighting Rose, I know I am!”

Depending on how things shake out this weekend and with a couple other key divisional matchups, it’s not out of the realm of possibility.

After all, timing is everything.