Angela Hill Set To Prove What She Knows To Be True

UFC Strawweight Angela Hill Knows She Has The Experience And The Skill To Be The Best, And She's Fighting To Advance Her Inevitable Rise At UFC Vegas 26
By McKenzie Pavacich, on Twitter @mpavacich_ • May. 6, 2021

Before her last fight against Ashley Yoder, Angela Hill said that every time she gets close to breaking into the top five of the UFC strawweight division, “something dumb happens.”

“I’m kinda at the point where it’s hard for them to give me someone who isn’t ranked, so that’s always nice,” Hill said. “But to get into that top five is always a challenge, so I feel like a big win over (Amanda) Ribas could get me a little bit closer to there.”

“I have to beat a top five opponent to get there. I messed up with the last two,” Hill said, laughing in reference to her split decision losses to Cláudia Gadelha and Michelle Waterson last year. “But I know I’m capable of starching them. If anything, those losses prove to me that I’m competitive with the top five and I can be there, I should be there, and I’m going to be there — as long as I stay motivated and keep getting better.”

Staying motivated despite whatever adversity is thrown into the mix is an ability of a true veteran like Hill, who has been a mainstay on the UFC roster for nearly seven years.

In that time, there’s no doubt that “Overkill” has seen it all, mentioning that she has “lost in basically every way possible,” making her truly prepared for any situation she could face in the Octagon.

With a new clarity about her and what she needs to do in order to be successful, Hill said that she needs to “stop leaving it in the hands of the judges and stop allowing it to be close enough where they can take a win away from me that I feel like I got.”

For the Muay Thai specialist, the solution is simple: she needs to finish her opponents. And while it’s a blueprint that’s far easier to draw out than it is to execute, Hill isn’t going to let the challenge of making sure she has complete control over the outcome of her fights impede on her goal of being the best. 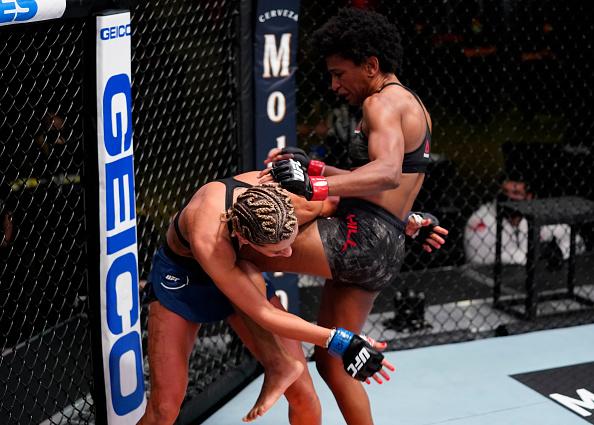 Hill said she knows she “needs to be more aggressive,” and it’s something she’s been working on and will put to the test this Saturday against 11th-ranked Amanda Ribas.

“I think she’s gonna come hard, try to take me down pretty quickly, and try to get a quick finish like she did with Paige (VanZant). But I see myself defending those attempts,” Hill explained. “I feel strong about my takedown defense, especially against people who like to do hip throws and judo throws like that, so I feel like I’ll be able to defend it and she’ll have to resort to traditional wrestling, which I also feel pretty strong about.”

Admittedly for Hill, lacking the ability to defend takedowns while optimizing her striking used to be a huge roadblock in the strawweight’s fights. Entering the UFC with the assumption that she’d “just knock out” all of her opponents proved to be one of Hill’s most prominent exploits.

“You have to train to be more aggressive, for speed and power,” Hill said, reflecting on her growth since her UFC debut. “It’s been like a big mental block for me. I’m always thinking about, ‘What if they shoot on me right now?’ Getting more grappling in has made me less afraid of that. Being comfortable if I get taken down, if I get put on my back, knowing that I can look for submissions or get up or work to the fence, or something like that, and get back to striking without feeling gassed from being stressed out or having all of this anxiety ‘cause I’m on the floor, that’s been a huge part as well.”

"I know that I'm capable of starching them."@AngieOverkill talks about how she matches up with Amanda Ribas and how she can climb the strawweight rankings 🔊⬆️ pic.twitter.com/E0Oyq5nx0Y

In what Hill calls the “revolving door” that is the strawweight division, truly anything can happen at any moment, and that’s what happened when Ribas was upset by Saturday’s headliner, Marina Rodriguez. Hill plans on having the same success against the Brazilian.

“It’s a good matchup for me because in her last fight, she got dropped by Rodriguez, and Rodriguez was able to expose a little bit of her striking game, and that’s my bread and butter so it’s a really good matchup in that sense,” Hill explained.

“My last two fights were against people who are really good at hip throws and that kind of stuff, so I’ve been preparing for this type of fighter for my last two fight camps. I feel like the few little adjustments over the last few weeks — what type of throws she likes to do, where she finds her openings — we’ve been able to develop a really good defense for that. So I’m really excited about getting in there and hopefully, all of that working out.”

And while the 12th-ranked strawweight is confident in her training and her skill, the real advantage lies with her experience. 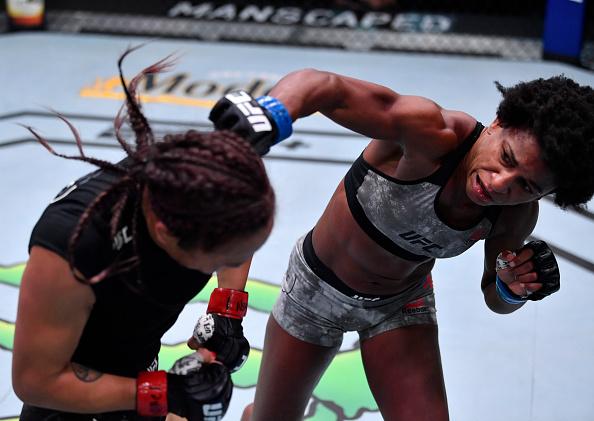 “We’re both ranked around the same, but I feel like she had a really quick rise to fame, and meanwhile I’ve been trudging in the trenches, fighting the toughest girls and dropping a lot of high-ranked fights against quality opponents.”

As if fighting three eventual champions and an additional strawweight title challenger isn’t enough, Hill’s resume catalogs almost exclusively ranked opponents, proving she has the bandwidth and strength to not only hang with the best, but become it herself.