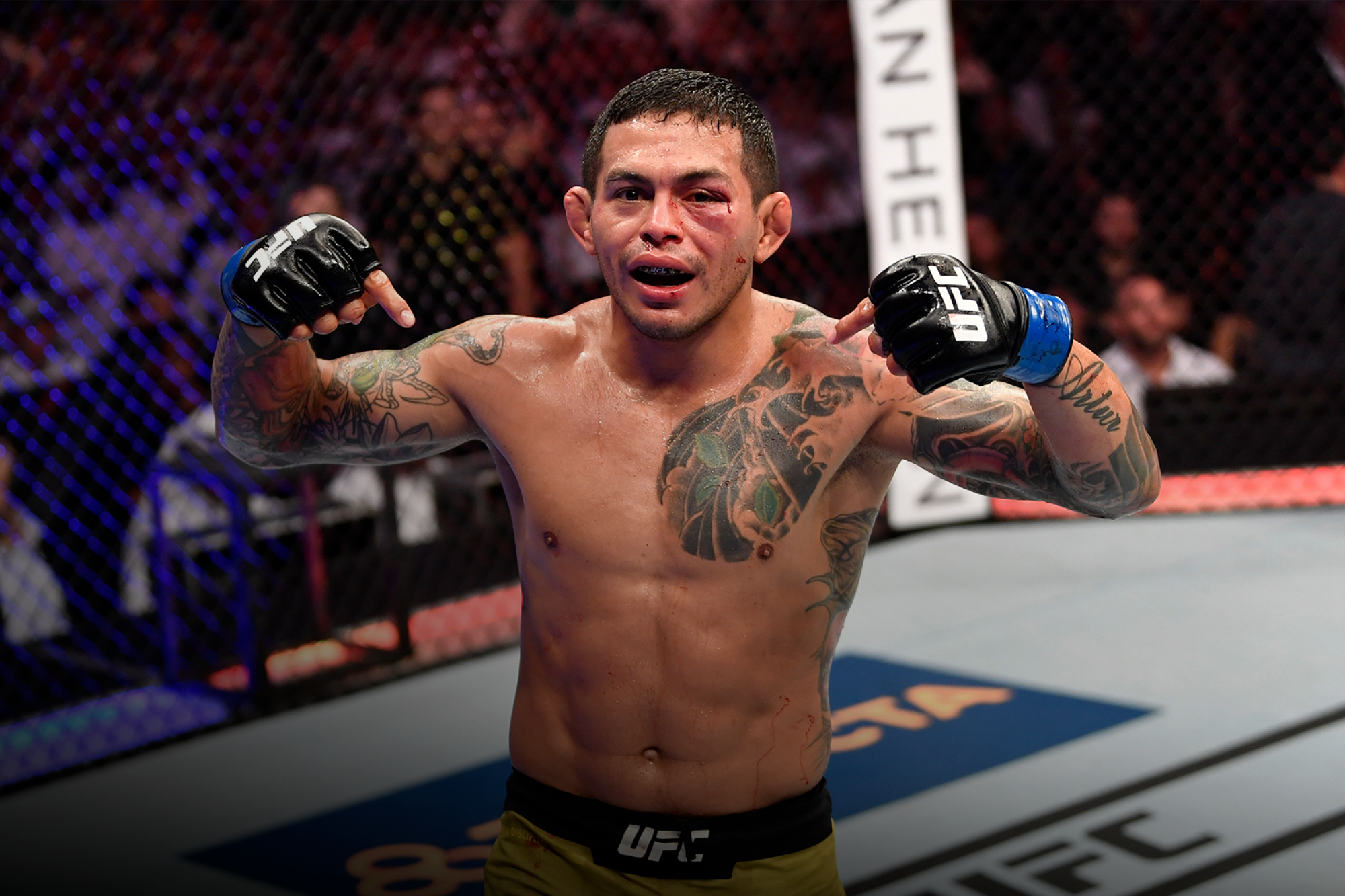 Diego Ferreira and Beneil Dariush Face Off Against Each Other For the Second Time In Their Career At UFC Fight Night: Overeem vs. Volkov
By McKenzie Pavacich, on Twitter @mpavacich_ • Feb. 4, 2021

When Diego Ferreira steps into the Octagon against Beneil Dariush for the second time in his career on Saturday, it won’t be a rematch; it will be an entirely different battle.

The last time the two met was 2014. The third-degree jiu-jitsu black belt was still fairly new to the scene, and Dariush was also working to make a name for himself. Ferreira took the short-notice bout to compete in front of a home crowd in his native Brazil — something he had aspired to do during his career, but never had the opportunity to.

“I was excited to fight in Brazil,” the tenth-ranked lightweight said. “I took the fight [on short notice] and it doesn’t matter, but I was on vacation and I wasn’t training because I had just fought four weeks before.”

The 155-pounders put on a show that ultimately ended with Dariush adding a unanimous decision victory to his early UFC resume. And Ferreira? He went back to work. 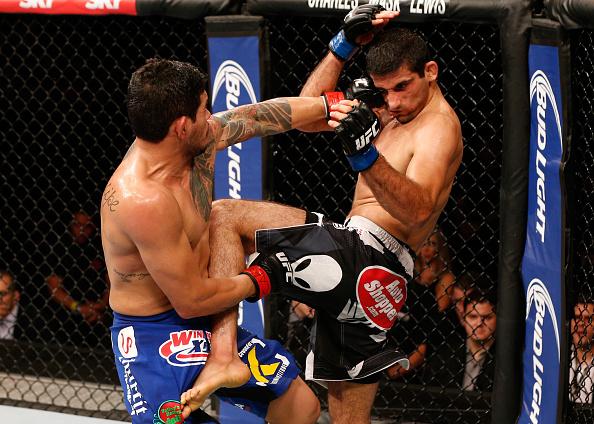 Diego Ferreira of Brazil punches Beneil Dariush in their lightweight bout during the UFC 179 event at Maracanazinho on October 25, 2014 in Rio de Janeiro, Brazil. (Photo by Josh Hedges/Zuffa LLC)

“I took the loss, and right after I told myself I had to get back on the horse, had to start training again,” Ferreira said. He was the one who made those decisions, because in the early stages of his career, the Careiro da Várzea native was his own coach. He decided when he would train and how he would train, but he quickly realized he was a one-trick horse fighting in a sport of Jacks-of-all-trades.

It was realization that became excruciatingly clear when Ferreira was stopped for the first and only time in his career by Dustin Poirier in the first round of their UFC Fight Night matchup in April of 2015.

“When I first got to the UFC, I was fighting to make a name as a jiu-jitsu fighter,” Ferreira recalled. “But then I fought Dustin and he knocked me out and I thought to myself, ‘No, I cannot be a jiu-jitsu fighter; I have to be the most intelligent, smart fighter I can be.’”

As soon as he left the Octagon following his second-consecutive loss, Ferreira made the decision to build a team around his new aspiration. 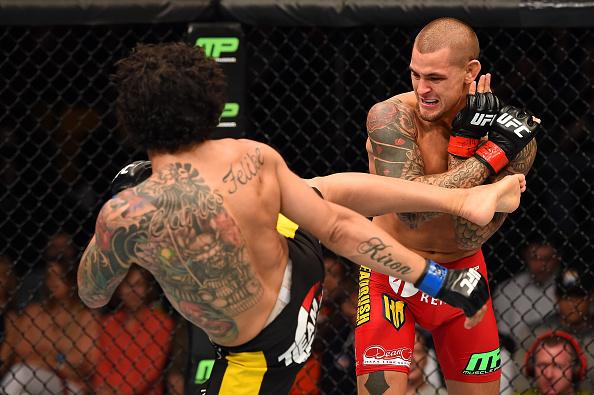 Diego Ferreira kicks Dustin Poirier in their lightweight fight during the UFC Fight Night event at the Patriot Center on April 4, 2015 in Fairfax, Virginia. (Photo by Josh Hedges/Zuffa LLC)

“That made me change a lot because I started to find my coaches. Fortis MMA has helped me a lot. I’ve been growing in mixed martial arts, not just as a jiu-jitsu fighter”

At first, it was hard for Ferreira to find his confidence in his newly underdeveloped and untried skills in different disciplines. But now?

“I can see that it works. My six-win streak in the UFC made me think, ‘Wow, why didn’t I make this transition so much earlier in my career?’,” he laughed.“But things happen for a reason. I keep doing the work, working on my wrestling, boxing and Muay Thai, and I just keep getting better every time.”

The proof is there for the world to see, and his confidence in his coaches and training has proven to make a difference. Ferreira has gone undefeated since being stopped by Poirier nearly six years ago, with half of those victories coming by way of finish, including his most recent submission of Anthony Pettis last year.

“It was incredible because it was one of the biggest events I’ve had, so to have that pressure over myself, fighting with the former champion of the UFC and WEC, it was really intense for me,” Ferreira said. “I kind of got used to it, though. As soon as I got to the stage, I felt good, I felt like I was at home.”

His Performance of the Night-winning showing under slightly brighter lights with Pettis propelled Ferreira into the top ten early last year, where he’s remained after an uncharacteristically inactive 2020.

“The pandemic was kind of really difficult for me. But this fight, I think I’m feeling hungrier than ever,” Ferreira said. “I took a year off after my fight with Anthony Pettis. I felt like I was kind of left behind after all that I did, but I’m here now and that’s what’s most important for me.”

On top of planning a wedding and building a house, Ferreira was set to fight Drew Dober last March before the Coronavirus ran rampant, causing a handful of UFC events to be cancelled and the rest of his plans for the year to be put on hold.

The year off felt “a lot longer,” but Ferreira made the most of his time off by focusing on things he had neglected in the past: learning how to take care of his weight and body better, with a heavy emphasis on nutrition.

After having to pull out of his rescheduled bout against Dober in November on UFC Fight Island, Diego told himself he didn’t “want this to happen to me anymore.”

“A lot of this experience has made me stronger,” Ferreira said. “That’s what I’ve learned, you have to be strong to be a fighter, and that’s what I took from this year. To not be fighting, it’s hard, but I think this is now the time to show how smart I got.” 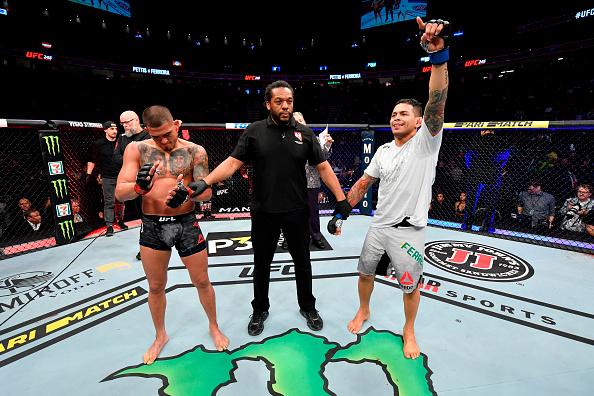 Carlos Diego Ferreira celebrates after defeating Anthony Pettis in their lightweight bout during the UFC 246 event at T-Mobile Arena on January 18, 2020 in Las Vegas, Nevada. (Photo by Jeff Bottari/Zuffa LLC)

Ferreira, excited to showcase his growth over the past year, will also be able to use this fight against the 13th-ranked Dariush as a benchmark in his progress over nearly a decade. But don’t call it a rematch, because it won’t be anything like the fight we saw nearly seven years ago.

“I don’t really look at it as a rematch. He got much better, and he’s coming into this with five straight wins,” Ferreira said. “I don’t think we’re the same fighters from when we fought six years ago. We’re completely different.”

While Dariush has double the number of showings as Ferreira since their last meeting, both are putting their unbeaten streaks on the line in an effort to ascend the overwhelmingly crowded lightweight rankings.

Ferreira, this time with a full fight camp and a battalion of coaches behind him, is ready for the unpredictable challenge that lies ahead of him.

“It just makes me more excited to be fighting him because I know he’s going to bring to the table something different than before,” Ferreira said. “But I’m willing to bleed, I’m willing to throw down with him, and I hope that the fans will be watching because it’s going to be a great fight.”