The Focus Will Always Be Fighting For David Onama

David Onama Has Never Been Interested In Social Media Followers Or Attention, He's Just Interested In Winning Fights. He Gets His Next Shot At UFC Fight Night: Walker vs Hill
By Thomas Gerbasi, on Twitter: @TGerbasi • Feb. 17, 2022

As David Onama walked around the Cable Dahmer Arena in Independence, Missouri, earlier this month, he kept a low profile. No UFC cap, no UFC shirt, no UFC sweatpants. He was just a former FAC champion showing up to watch his teammates and peers compete.

But he was noticed in his adopted home state.

“I'm just being me,” he said. “No UFC gear at all. (Laughs) People knew who I was, though. That's all that mattered.”

A lot more people notice the featherweight prospect these days after he parlayed a short-notice UFC debut against Mason Jones last October into a memorable three-round scrap that took him from the regional scene to the bright lights of the Octagon.

And while a fight’s still a fight for Onama, he did enjoy getting his chance to battle the best at the highest level of the sport.

“After that fight, it was a loss, but it felt like I won,” said Onama, who dropped a close decision to the highly touted Welshman. “And the feedback I was getting from fans, family and friends was that I showed the world what I could do. That's what I was expecting people to say, and it showed. I went out there and did what I had to do. I didn't get my hand raised, but it felt like a win. It felt good.”

It should have, even though Onama left the UFC APEX with the first loss of his nine-fight career. But his willingness to take the fight (up a weight class, no less) and go in and deliver a solid and crowd-pleasing performance made it clear that when he returns to 145 pounds this weekend against veteran Gabriel Benitez, big things are expected from the 27-year-old. And yeah, this is short notice, too. 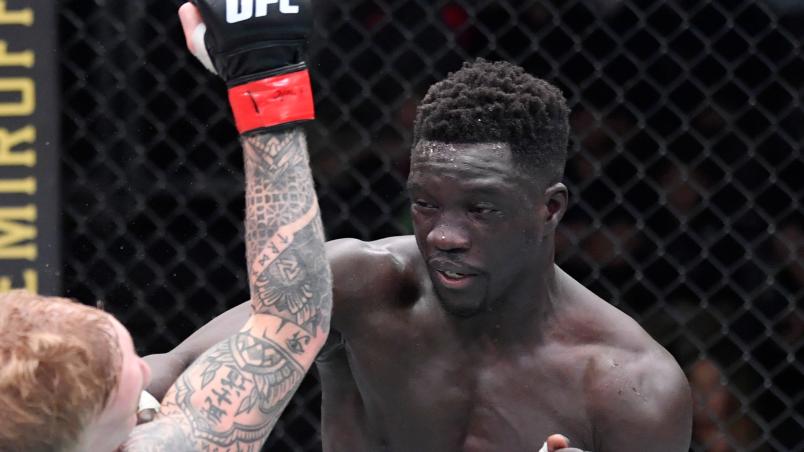 David Onama of Uganda punches Mason Jones of Wales in a lightweight fight during the UFC Fight Night event at UFC APEX on October 23, 2021 in Las Vegas, Nevada. (Photo by Jeff Bottari/Zuffa LLC)

“I've been in the gym, so I'm gonna call it camp anyway because I never stop training,” laughs Onama. “So when I got the news, I was actually in the gym and I was training, and three weeks is enough time for me. I'm all good with it.”

Three weeks is better than less than a week, but you get the impression that Onama doesn’t care as long as he gets to scrap.

“I don't really look at it like that, like it's short notice or whatever,” he said. “I felt like it was a good opportunity for me, that's why I took the fight. I just wanted to show the world what I can do. And I feel like I went out there and did it. I'm not gonna blame the four-day or three-week notice. I'm just here to fight, and I feel like people are starting to know who I am.”

They are, and in the early part of 2022, Onama is seen as one of the top rising stars in the UFC. That means a couple wins and he can start planning out a bright future in the featherweight division. Of course he has to get those wins first, starting this weekend.

The Growing Greatness Of Glory MMA

Get back to winning? He makes it like he’s lost ten straight. Onama laughs.

“I'm a winner,” he said. “I'm competitive. So I need to start winning before I start calling anybody out or brag about being in the Top 15. That's not how I am. I want to work my way up and I want to show people what I can do. I don't want nothing given to me. I want to work for it. Something that you work for, it feels so much better than something that is just given to you.”

That work ethic is in his DNA, and as he explains it, as soon as he came over to the United States with his family from Uganda at the age of 10, he was dead set on becoming a fighter.

“I feel like my whole family and all my friends knew I was gonna become a fighter, because growing up I was always into combat sports,” he said. “I watched the UFC fights, I was getting into school fights and all that, but I feel like everybody knew I was gonna make it. I told myself the older I get, this is what I want to do. I want to try cagefighting, and from then on, it's been a dream come true. Nobody's really surprised - they knew what I wanted to do, what I wanted to become and I showed what I could do.”

“I'm different from a lot of fighters,” Onama said. “Some fighters are just here for the media and the followers. I'm here to fight and just have fun and get paid. I love what I do.”