Joaquin Buckley Goes All In

Joaquin Buckley entered last year with heaps of momentum, having capped off his second-half call-up to the UFC by registering one of the most impressive knockouts of all-time and following it up with a second straight blistering performance.

Brandishing a 12-3 record, coming off back-to-back Performance of the Night-winning efforts, “New Mansa” was primed and ready to continue making waves in his first full year on the UFC roster.

And then Alessio di Chirico knocked him out in a little more than two minutes, bringing all that momentum to a screeching halt.

After the bout, he knew it was time to make some serious changes.

“I don’t put it on nobody for not knowing, but a lot of people don’t realize that I wasn’t a full-time fighter at the time, so I didn’t have the camps and the capabilities to go place-to-place and s*** like I’m doing now,” explained Buckley, who makes his 2022 debut on Saturday in an explosive pairing with Abdul Razak Alhassan. “Now I’m able to train every day. I wasn’t doing that when I fought Kevin Holland, when I fought Impa (Kasanganay), when I fought Jordan Wright. I wasn’t a full-time fighter.

“As soon as I got knocked out, I said, ‘F*** that! I gotta find something new.’ I made the switch that day,” he added with a booming laugh. “After I lost to Alessio, it showed me, ‘These dudes do this s*** all day, every day, and I’ve got to do the same thing!’”

Going all-in on his fighting career involved getting rid of the financial safety net most fighters maintain when they’re competing on the regional circuit or in the very early days of competing on the big stage.

For Buckley, that meant walking into Walgreens and telling his boss that he had to stop working.

“I wanted to keep my job there and just stay committed to getting another check,” said the powerful middleweight, whose spinning back kick knockout of Kasanganay went viral and remains one of the signature finishes of the last five years in all of MMA. “My Walgreens check don’t match up to the UFC, but at the end of the day, they’re consistent, so I wanted to save my UFC checks and continue to work because it’s a great, easy job.

“The guy that I got the job from is Nicholas Dixon, and I had to make that call with him and tell him that I had to stop working. He didn’t have any issues with it — he knew what it was — because when you’re trying to be a fighter, you’ve got to be full-time with it because this is a full-time job.

“That’s the sacrifice because now I’m not getting no checks anywhere else, so I have no time to afford to lose to nobody.”

While Buckley has always bounced around a little, supplementing his work at home in St. Louis with trips to Michigan to train with more seasoned competitors, shifting his focus to fighting full time prompted him to seek out new locations and the opportunity to learn from some different people.

Knowing that fellow middleweights Sean Strickland and Chris Curtis were holding court at Xtreme Couture, the 27-year-old packed up his gear and headed to “The Fight Capital of the World,” and instantly felt at home.

Fighters on the Rise | UFC Fight Night: Walker vs Hill

“In St. Louis, there were no looks for me at the highest level, so I had to head out to Michigan in order to get that, but now that we’ve got some bread in our pockets, I’m able to travel, go other places, and train with the world’s best,” began Buckley, who got back in the win column last time out with a third-round stoppage win over Antonio Arroyo. “The Xtreme Couture thing was a random thing — I really just wanted to work with some different bodies, get some different looks.

“I heard Sean Strickland was tearing people up and they have Chris Curtis over there, they’re both in my weight class, so I thought, ‘Hey, it’d be fun to work with them.’ It was a great gym to go to — good vibes, good energy, everybody meshed well with me, so I’m glad that I came out here to Vegas to come train with them.

“Vegas going to be a regular stop,” he added. “I meshed real good with Eric Nicksick, the head coach at Xtreme Couture — he’s good folks — so I definitely see us working together in the future for sure.

“I’m always going to be hopping around, working with different people because if I’m going to become the best, I’ve got to work with the best, from all different areas.”

Already feeling the benefits of his shift to full-time status, Buckley is champing at the bit to get his 2022 campaign underway after this bout with Alhassan was pushed back from the opening card of the year to this weekend’s event at the UFC APEX.

“We don’t rev up again — we stay revved, so I’m ready for whatever,” he said when asked about the impact of the delay, speaking with an energy that made it clear there was no letting off the gas over the last month. “It was him that had to get ready, so it’s just more time for preparations, so we’re good. He’s making it worse for himself, if anything.

“My big thing is let’s go ahead and get this ***-whoopin’ out the way so we can both go home.”

The pairing is the middleweight equivalent of putting a barrel of gunpowder and a crate full of dynamite a foot away from a roaring fire — it may not explode right away, but you know it’s bound to catch at some point, and when it does, look out. 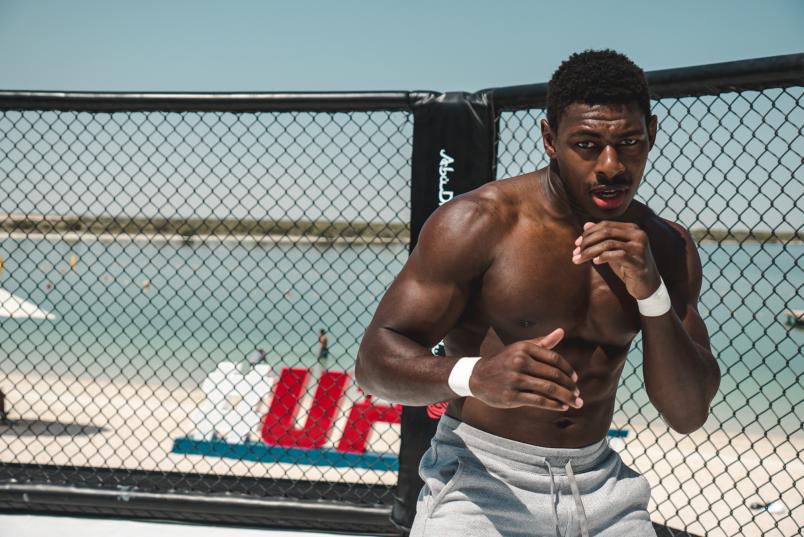 A former welterweight, all 11 of Alhassan’s victories have come in the first round, including his “one shot, one kill” effort against Di Chirico in August, where he threw one head kick, landed it clean, and secured the victory in 17 seconds.

“What’s exciting about Abdul Razak Alhassan is that all his wins come by finishes as well,” said Buckley, his pace quickening. “A lot of people think I’ve got a weak-*** chin or something, so it’s going to be fun to prove that I ain’t got that.

“If I can withstand his punishment and put that damage on him, it’s going to make for a good fight. A performance bonus is always what I’m looking for, so it’s gonna be a good fight.”

Recap The Action From UFC 271: Adesanya vs Whittaker 2

While the shift to training full time has helped sharpen his tools and smoothed off the rough edges of his game, it has also prompted Buckley to set out some plans for the future, both inside and outside of the Octagon.

But the road to making those things come to fruition goes through Las Vegas, the UFC APEX, and Alhassan on Saturday.

“I feel sorry for a lot of guys I fight because it seems like they’re getting cut,” said Buckley, chuckling. “I don’t know if the UFC is trying to tell me something, but I guess I’ve got to end this man’s career with the UFC, and that’s what I’m trying to do.

“I can’t just win — I’ve got to put him in the dirt — so that’s the biggest thing for me. Once I do that, everything else will come to fruition.”