In the final days of 2019, Khalil Rountree Jr. took to Instagram and posted two messages to his story feed, the first of which said, “My next fight will be my last. so be sure to watch. Date announced soon,” followed by “Fight contract signed.”

He was three months removed from a disheartening loss to Ion Cutelaba in Copenhagen, Denmark that dropped his record to 4-4 with one no contest inside the Octagon and eroded all the positive ground he’d gained from a blistering effort against Eryk Anders five months earlier at UFC 236.

“The loss to Cutelaba really had a gigantic emotional effect on me because I trained so hard for it and did all the right things in training and all that stuff and that was the outcome,” Rountree said on Tuesday morning, reflecting on where his mind was at heading into 2020 as he readies to make his first appearance since that bout when he takes on Marcin Prachnio on the preliminary card at UFC 257 this weekend in Abu Dhabi.

“That loss to Cutelaba was really the last straw. I knew that I had one more fight on my contract, so I was just going to fulfill that and be done.”

When that final bout he teased on Instagram — a mid-March pairing with veteran Sam Alvey — was scuttled as the COVID pandemic paused the UFC schedule and sent the world into lockdown, Rountree used the time to reflect on what made him so willing to walk away from the sport. 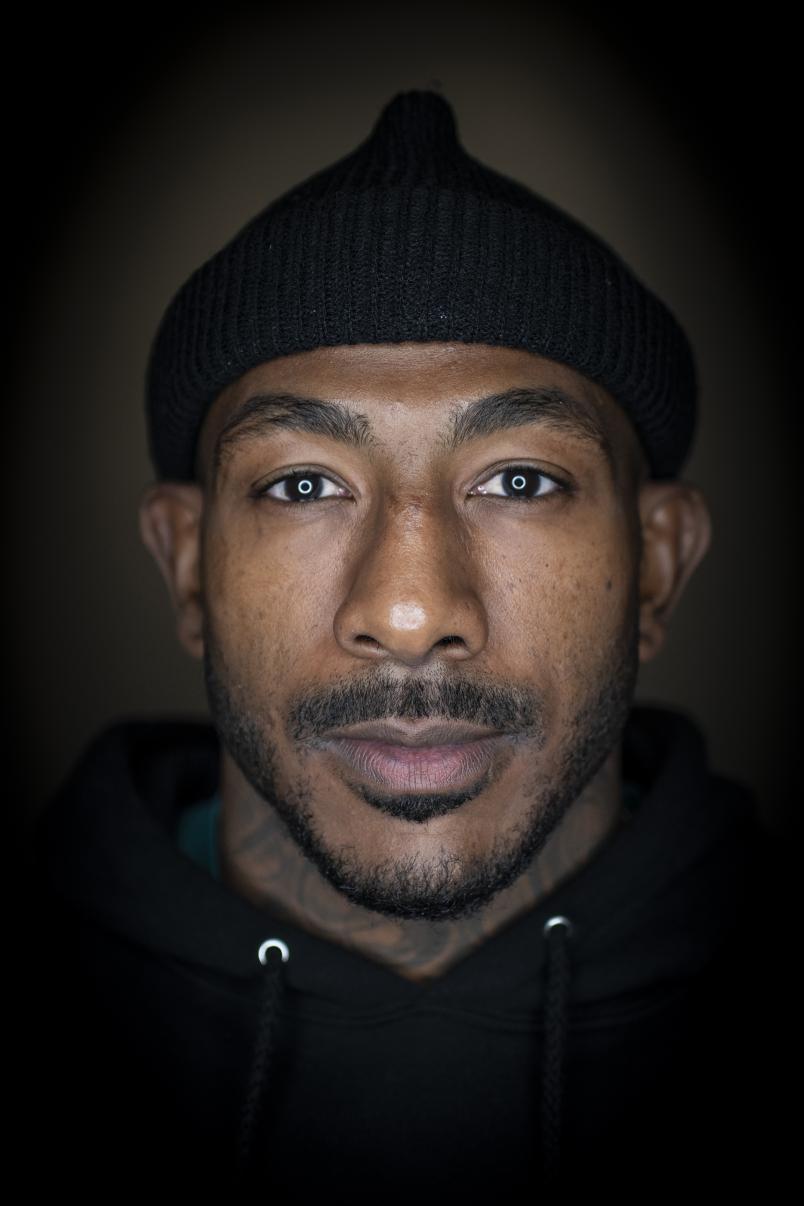 The introspective and thoughtful light heavyweight, who now lives in Thailand year-round, identified two major issues that served as blockages to his enjoyment of the sport.

The first was the heavy focus on the entertainment side of things and how the sport is covered, none of which meshes with his far more traditional upbringing in the martial arts and laid back, introverted nature.

“For me, martial arts and MMA are something that saved my life and I was able to have really good instructors in the beginning who were able to teach me the core values of martial arts,” said the nine-fight UFC veteran who initially ventured into Wanderlei Silva’s gym in Las Vegas in order to lose weight. “But the thing with Cutelaba screaming in my face at weigh-ins — I get that it’s entertainment, but at the same time, this isn’t what I f****** signed up for, man. I’m all about competition and skill, but all the showboating and s***-talking and stupid MMA journalism just made me feel like, ‘This is just not my place.’

“Some guys love it and they eat it up, so I was questioning, ‘Do I even belong here? Is this even for me?’” continued Rountree Jr., who also cited the fixation on winning and the way opinions shift depending on results as another piece that threw him for a loop and contributed to him pondering retirement.

“This s*** is hard, man!” he said with a laugh. “We’re the most entertaining sport in the world, in my opinion, but unless you’re winning, you’re not getting respect. I had sponsors turn me down because I don’t have a winning record (in the UFC), so I was just like, ‘This game is f***** up’ and that’s a big part of what took my heart out of it.”

Identifying the external roadblocks to his enjoyment of the sport he’d been pursuing as a profession actually touched on a piece of the deeper, internal struggle that was truly standing between the former Ultimate Fighter finalist and a fulfilling, enjoyable career inside the Octagon. 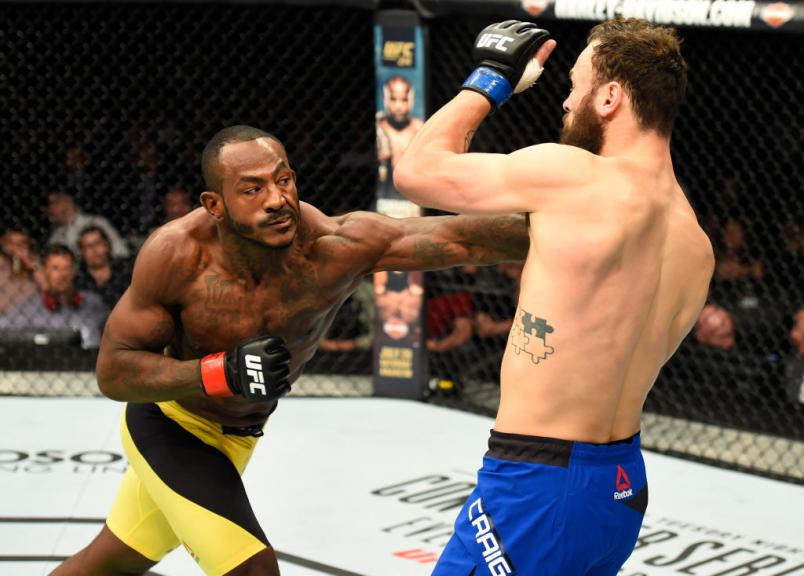 Putting it on Paul Craig, 2017 (Photo by Josh Hedges/Zuffa LLC)

“One of the things that I reflected on and had to get real with myself about is that my career has kind of been a fluke, in a sense,” said Rountree, who rose to the highest level in the sport with exceptional quickness and limited experience.

He took what turned out to be his final fight on the regional circuit in hopes of getting a victory so he would be allowed to audition for Season 23 of The Ultimate Fighter the following day.

He made it through the auditions and onto the cast, winning his fight to get into the house by second-round stoppage before losing to his friend and training partner, Cory Hendricks, by submission in their elimination round matchup. With Hendricks injured and forced out of the competition, Rountree was awarded a second chance, and he punched his ticket to the finals with a semifinal victory over Josh Stansbury.

He lost in the finale, repeatedly getting taken down and controlled on the canvas by Andrew Sanchez and was submitted in his next fight by Australian newcomer Tyson Pedro. The only consistent thing about his career was inconsistency, as quality outings were chased by tepid showings or sudden stoppage losses.

“I got into the UFC after being a professional for 14 months and I’d only been a fighter in total for less than four years,” continued Rountree Jr., citing personal questions and challenges that are consistent with Imposter Syndrome. “There were so many guys that were training their asses off for so much longer to get where I’m at and I got there pretty early, and I got given a lot of chances.

“And I got where I got to without putting in a lot of work,” he added. “I put in work — I lost a bunch of weight and all these things — but the amount of work I could have been putting in, I definitely wasn’t doing it, especially training jiu-jitsu, and I lost multiple fights by submission.”

All of that changed over the last several months, when he began “giving myself 100-percent, instead of doing the bare minimum,” to use his words. 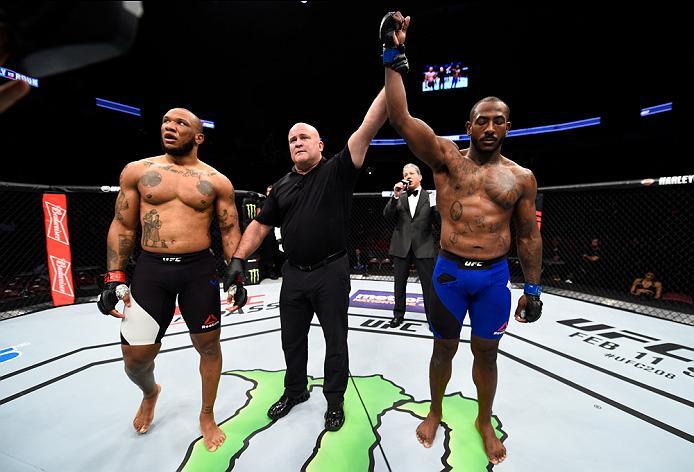 Part of that shift included sharing his thoughts with his friend and jiu-jitsu instructor, fellow Ultimate Fighter alum Joseph Henle, who got Rountree back in a gi, back on the mats, and back into the basics of “The Gentle Art.”

“If I’m really going to see what my potential is, I have to do everything, not just the things that I like to do and the things that got me to where I am,” he said, echoing a personal challenge most can likely identify with on some level. “I’ve got to do the hard s***.”

He trained diligently and got comfortable being exhausted and drenched in sweat.

He didn’t skip wrestling class and showed up to every jiu-jitsu lesson.

He stopped cutting corners and switched his diet to where now everything he eats is entirely plant-based.

“All of that really helped with my overall approach and my overall mindset,” he said, reflecting on the changes he made and the impact it had. “I started to see different things open up, started to get a bit more belief in myself and my abilities.”

Just a few days away from making his 10th appearance inside the Octagon, the soon-to-be 31-year-old feels like a first-time competitor again.

“For me, it feels like I’m having my first fight in the UFC, in a way,” he said. “I have memories of being there and the journey I’ve been on, but in a way, it’s a fresh start, a new beginning.

“Before I would just hope for a lot of things and rely on my talent, and now, I’m studying more film and really trying to develop and be the best mixed martial artist and person that I can be and see where that takes me.

“I know where the other approach took me, so now it’s a bit of an upgrade.”

Now comes the most difficult part of all: stepping into the cage and putting everything on the line against Prachnio with no guarantees that all the deep introspection, major shifts in mindset and approach, and hours in the gym will translate into victory.

This time, however, Rountree Jr. is already working to balance those competing energies — the excitement of being back and the anxiety that comes with crossing the threshold into the Octagon — and enjoying the experience.

“The way that I would describe it is the nervousness, mixed with a bit of fear, and the feeling of goodness and greatness are very equal; they’re just as strong on both ends, and I think that’s a really cool experience because it’s really up to me to decide what end of the spectrum I’m going to stand on.”

After more than a year of putting in serious work in every sense possible, all that remains is the fight itself, and Rountree is hopeful that his efforts will result in getting to experience that euphoric high every fighter talks about chasing each time they step into the cage.

“I just really want to win, man,” he said earnestly. “I want to see what it feels like to win when I’ve put in the kind of work that I’ve put in.

“I’m just really, really focusing in so that can come true.”