It took time for Andrew Sanchez to find the perfect recipe to success, but now that he's found it, he's ready to hit his stride at UFC 257.
By Gavin Porter, On Twitter @PorterUFCNews • Jan. 20, 2021

Since joining the UFC in 2016, Andrew Sanchez has constantly been working to add new skills to his toolbox. He’s focused his attention on refining his wrestling, becoming a more natural striker and utilizing the power in his hands.

And regardless of how his UFC 257 bout with Makhmud Muradov goes down, the 33-year-old Illinois native plans to hire a coach and master another useful skill – knitting.

“It’s really hard to find good information on knitting,” Sanchez told UFC.com. “It’s not f******* easy to do. I’ll sit there and listen to my AM radio and try to knit sweaters and s*** for my friends.”

Sanchez points out that knitting takes plenty of patience and that it’s in his nature to obsess over something until he’s good at it. And that’s exactly how The Ultimate Fighter season 23 winner has approached his UFC career – with patience and obsession. 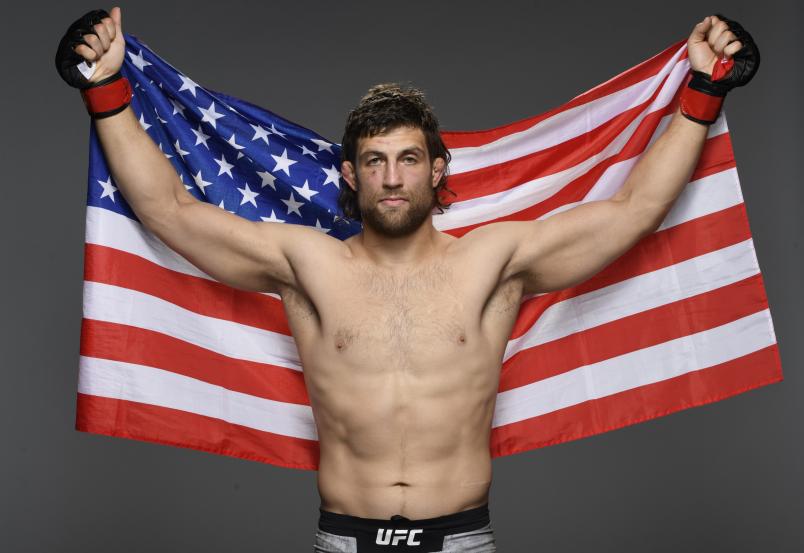 Andrew Sanchez poses for a portrait after his victory during the UFC Fight Night event at UFC APEX on August 08, 2020 in Las Vegas, Nevada. (Photo by Mike Roach/Zuffa LLC)

He went back and watched all his past fights and he spent hour after hour in the gym filling the holes he saw in his game. It took time and he suffered some losses, but it paid off for the aspiring middleweight.

“In the process of learning new skills, you can kind of take a dive and there are tons of ups and downs in fighting. I explain it like a thousand-piece puzzle, and you get little pieces here and there but eventually you have to connect the dots between the pieces, and it starts to make a picture,” Sanchez said about his UFC journey. “That’s what finally started happening with the striking and the wrestling. Everything started to come together. There are so many factors; the weight cutting and the strength and conditioning. I feel like I have the perfect recipe and the dots are connecting and you saw the violence that occurred because of it [in my last fight]. Things are going great and I’m hitting my stride now.”

A first-round knockout of Wellington Turman is the violence that “El Dirte” is referring to.

Sanchez leaned heavily on his wrestling skills early on in his mixed martial arts career but found the power in his hands against Turman. After experiencing the feeling of that knockout, Sanchez can’t help but feel energized and confident he can produce a similar result against Muradov.

“I discovered the magic power of f****** cracking, throwing with heat,” Sanchez said with a grin. “In my last fight I felt confident and calm and composed unlike before. Now I can think in there and I can make wise choices. I think I’m going to build off that last fight.”

Building off his past performances has been a major point of emphasis for Sanchez, who, after losing a close fight to the surging Marvin Vettori in 2019, flipped a switch.

“It was one of those fights where you do it and then afterwards you watch it and think about little tweaks you can make and you could take that fight,” Sanchez said of his UFC Tampa showdown with Vettori. “With a bit more confidence I could have had that win. After my last fight, I can fight with anyone now. I truly believe that.”

So just days away from his eighth appearance in the Octagon, Sanchez is ready to throw down at Etihad Arena in Abu Dhabi. He’s experienced ups and downs during his first four and a half years in the UFC with the belief that someday he would break through.

He’s been patient and he’s been obsessed. All that’s left for Sanchez to do is keep connecting dots – and well, learn how to knit.