2020 was a very different year for most people, personally and professionally, and that includes UFC strawweight competitor Marina Rodriguez.

“It certainly was an atypical year,” said the 33-year-old contender, who returns to action against fellow Brazilian Amanda Ribas on Saturday at UFC 257. “It was the first time I only had one fight in a year, and I couldn’t finish my camp as I would have liked.

“I had a lot of issues going into the fight,” she said, referencing her late-July clash with former champion Carla Esparza, which also took place on Fight Island in Abu Dhabi. “One of my cornermen tested positive for COVID, and that made our quarantine much longer than anyone else. I ended up training in my room for 25 days, and that definitely didn’t help my mobility and sense of space when it came to fight time.”

In addition to only competing once and completing her camp confined in her hotel room, Rodriguez’ bout with Esparza also resulted in the first setback of her professional career.

After reaching the UFC with 10 wins in as many starts, the Muay Thai stylist cobbled together a 2-0-2 record over her first four appearance inside the Octagon, sandwiching victories over Jessica Aguilar and Tecia Torres between draws with Randa Markos and Cynthia Calvillo, the latter of whom came into the contest significantly above the strawweight limit. 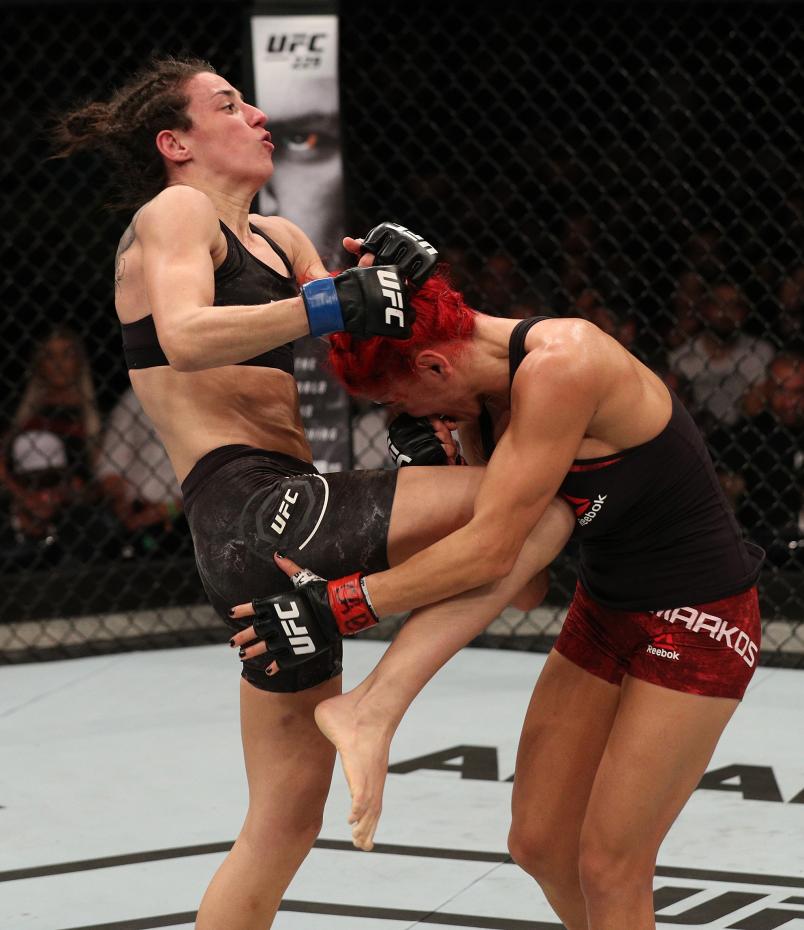 Cracking Randa Markos with a knee in her UFC debut Sept. 22, 2018 (Photo by Buda Mendes/Zuffa LLC)

Against Esparza, it was a classic clash of styles, with the former champion relying on her wrestling and top game, while Rodriguez attacked with sharp elbows from the bottom and exploited her advantage in the striking game whenever the two combatants weren’t on the ground.

Despite having some success and one judge seeing the contest in her favor, Rodriguez landed on the unhappy side of the split decision verdict.

“When the bell rang, I didn't feel like I was taking the win,” admitted Rodriguez. “I knew she had much more time controlling me, and as much as I believe I had hurt her more then she did me, I knew that the control time would be a big factor. I believe I had a good fight against a former champion, so overall it was not a bad loss.

“All of my fights in the UFC have been against ranked or very experienced opponents, and that to us is essential,” continued the Brazilian, who will maintain her run of facing elite talent when she steps in against Ribas on Saturday. “I have been able to grow as a fighter in each of these bouts and evolved from every adversity I have faced in each of these fights.

“All of these strengthened me and made me a better athlete,” she added. “There will be a time when all the judges' decisions will be as we planned, and that time is getting closer and closer.”

This weekend would be the perfect time to start shifting those close, competitive fights into clear and obvious verdicts in her favor, as Rodriguez steps in with Ribas, one of the brightest young stars on the UFC roster this weekend in Abu Dhabi.

Over her first two years competing in the Octagon, the 27-year-old Ribas has posted a 4-0 record, bookending decision wins over Mackenzie Dern and Randa Markos with submission victories over Emily Whitmire and Paige VanZant.

With obvious skills, a vibrant personality, and charisma for days, the American Top Team representative has positioned herself as one of the top “Fighters to Watch” in 2021, and someone Rodriguez is very much looking forward to mixing it up with at UFC 257.

“She has been growing a lot in the UFC; (she) had some good matchups style wise and she took full advantage of those,” Rodriguez said of her opponent on Saturday night. “She is a tough and strong-willed fighter, so I believe we will have an epic fight.

“I believe that she has a very strong clinch and grappling game and will definitely be looking to use it against us, but we are very used to fighters trying to work that strategy. We have been working on that for ages, and I believe I am a little better at countering that than last time. 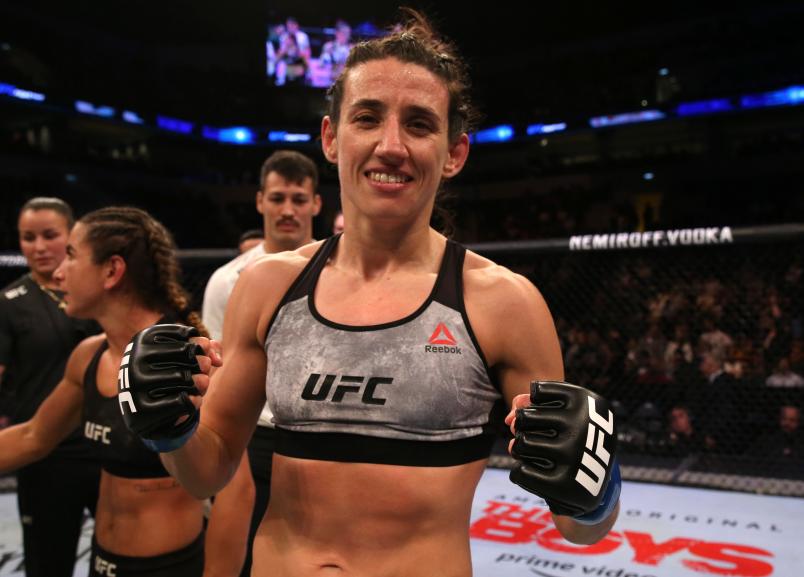 Celebrating a win over Torres, 2019 in Montevideo, Uruguay. (Photo by Alexandre Schneider/Zuffa LLC)

“I think it will be a battle of wills,” continued Rodriguez, giving her prediction on how the fight will play out. “If she wants to test her striking, I can guarantee the audience will be the biggest winners, as we will definitely have a fight for the ages, but if she decides to try to take me down, I will be ready for it.

“There is a very good chance the fight won't make it to Round three — both of us are finishers in our own fields, but I am confident that my hands will be the first ones connecting. That is my main goal in this fight.”

After a year that was a grand departure from the norm, Rodriguez is happy to be beginning her 2021 campaign in the cage in January, hopeful that things will be a little more typical over the next 12 months, and eager to translate the work she and her team have been doing since her last foray to Fight Island into the kind of success that brings her closer to attaining her goal of standing atop the UFC strawweight division.

“I really would love to have a three-fight year in 2021,” began the Brazilian, “and of course, always facing fighters that are well-ranked in my weight class.

“Above all, a win here solidifies even more the quality of the work that has been done locally in Florianópolis — by my team, Thai Brasil; by my head coach Coach Marcio Malko; by my grappling coach Igor Soares; and by my main training partner, who I believe will soon be in the UFC as a flyweight, Daiana Torquato.

“Everything is working well, and this fight will take us one step closer to our final goal.”