Jacare Souza isn't interesting on looking back at his career just yet, the only thing that's on his mind is defeating Kevin Holland at UFC 256.
By Zac Pacleb, on Twitter @ZacPacleb • Dec. 11, 2020

Ronaldo “Jacare” Souza isn’t interested in looking back on his career, despite its many accolades and accomplishments. Of late, the most notable thing is the fact that he’s coming off a pair of losses and was the first UFC athlete to test positive for COVID-19 when the sport returned to action in May.

Understandable, and with a late change of opponent as well, Souza is rolling with the punches as well as one could hope.

“Holland is a great fighter,” Souza told the media. “He came with good victories, and I’m ready to fight against this guy.”

The 41-year-old middleweight contender hasn’t stepped in the Octagon since his split decision loss to Jan Blachowicz in his light heavyweight debut in November 2019. Since then, it’s been an uneven road back to the Octagon.

The most recent change of course came when Holland tested positive for COVID-19 and dropped out of a scheduled main event against Jack Hermansson. Souza’s opponent, Marvin Vettori, was tabbed to replace Holland, who then stepped in to face the Brazilian a week later. It’s a testament to the crazy times in the sport and the world as a whole, but it’s all a part of Souza’s journey to prove he is still very much a contender at 185.

“All my career is great,” Souza said. “I did a very hard training camp, so I have to win the fights. I don’t know why I don’t fight for the title, but I don’t care. I have to put my focus in my future, and my future is Holland right now.”

In Holland, Souza gets a man who has fought four times in the last seven months and built the reputation of an “anyone, any time, any place” breed of fighter. Once he gets into the Octagon, he has also shown a propensity to carry a lively conversation in the midst of a fight.

Souza, however, has a pretty straightforward plan to deal with his trash-talking foe.

“I have no problem with the trash talk,” Souza said. “When the Octagon closes, he can talk trash, but I put him down and he still talks trash, I want to break his arm.” 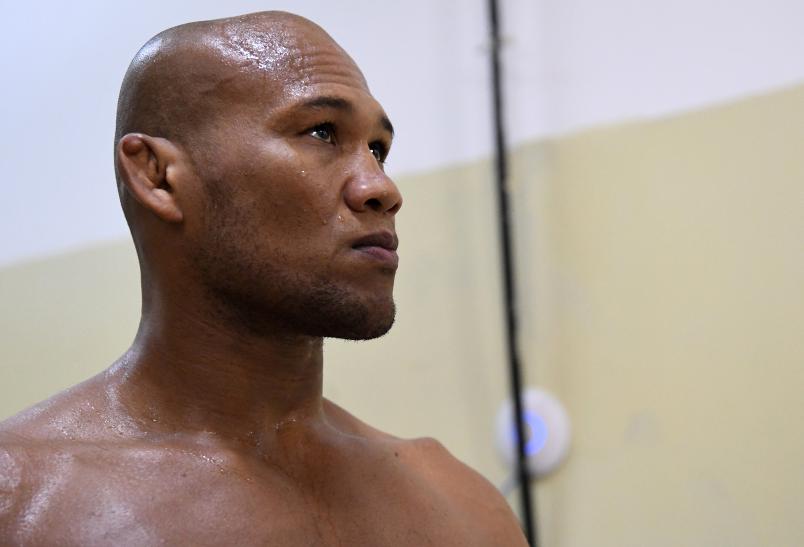 Ronaldo 'Jacare' Souza of Brazil warms up prior to his fight during the UFC Fight Night event at Ibirapuera Gymnasium on November 16, 2019 in Sao Paulo, Brazil. (Photo by Mike Roach/Zuffa LLC via Getty Images)

The short-term memory that plagues the MMA world is evident when it comes to Souza. It wasn’t long ago that Souza was coming off a big-time knockout over Chris Weidman and looking forward to a rematch with Yoel Romero. A jiu-jitsu ace with real power, Souza is as lethal a fighter as any in the weight class despite his recent speed bumps. A win over Holland probably doesn’t get him back into the title picture, but it could provide a reminder of what the former Strikeforce middleweight champion can do.

Souza dismissed any considerations or concerns about retirement and the window closing on his career. His only focus is on the chatty up-and-comer in his sights right now and doing what he’s done for more than 17 years.

“I did a very hard training camp for this fight,” Souza said. “I brought big guys to help me, so I trained hard. I’m ready to fight against Holland. That’s it. Let’s go.”