Junior Dos Santos is the first to admit that he's been going through a rough path, but he believes that UFC 256 is the perfect chance to get back on track.
By E. Spencer Kyte, on Twitter @SpencerKyte • Dec. 7, 2020

Junior Dos Santos made his UFC debut more than a dozen years ago, stepping into the Octagon as a 6-1 newcomer with a full head of hair, positioned as a considerable underdog against divisional mainstay and future champion Fabricio Werdum.

Beginning that evening in Rosemont, Illinois and over the 21 appearances that have followed, each trip the 36-year-old Brazilian has made into the Octagon has placed him opposite a dangerous member of the heavyweight class. He claimed UFC gold by handing Cain Velasquez his first career loss, is one of only three men to defeat current champion Stipe Miocic, and holds victories over talented competitors across multiple generations, making him one of the most accomplished heavyweights in UFC history.

But lately, his trips into the cage have produced more frustration and disappointment than anything else.

The affable Brazilian entered 2020 off a loss to Francis Ngannou the previous summer. To that point, the former champion had never lost consecutive fights in his career.

As he readies to make his third appearance of the year against Ciryl Gane on Saturday night at UFC 256, he does so mired in a three-fight losing streak that has the normally gregarious and positive heavyweight searching for answers.

“It’s been terrible, actually; it’s been terrible,” Dos Santos said of his consecutive losses to Ngannou, Curtis Blaydes, and Jairzinho Rozenstruik, all of which have come by technical knockout. “The worst part is that I was feeling good for all those fights. I think I was doing very well in my fights, but like everybody says, in the heavyweight division, all it takes is one punch and everything is done.

“I’m living that right now. In my last three fights, they connected with a big punch and I lost the fights. It’s a terrible position to be in and I want to leave this in the past and move forward, back into the winning track.”

With each subsequent loss, fans and observers have started to wonder more and more if the adversary Dos Santos is really fighting is Father Time, the undefeated specter who often signals the end of an athlete’s career, at times even before the competitor is ready to acknowledge it themselves.

On one hand, it’s hard to ignore some of the statistics and metrics: 22 UFC appearances, 29 professional fights, dozens of rounds trading blows with the heaviest hitters in the game, and three straight stoppage losses after never suffering consecutive defeats make a compelling case for “Cigano” having reached the twilight of his career.

But at the same time, those three setbacks have come against the top three contenders in the heavyweight division; a trio of talents that are a combined 24-5 with one no contest inside the Octagon, with one of those men — Ngannou — accounting for the only setbacks the other two men have suffered during their UFC careers.

In many ways, it would be easier for Dos Santos to accept his recent struggles if he were taking a step back after each setback and still coming away on the wrong side of the results. At least then he would have a clear indication that his days competing at the highest level were coming to an end, but instead, he’s repeatedly stepping in against elite contenders and holding his own right up until the point where things go sideways and he ends up on the deck, watching his opponent celebrate triumphantly. 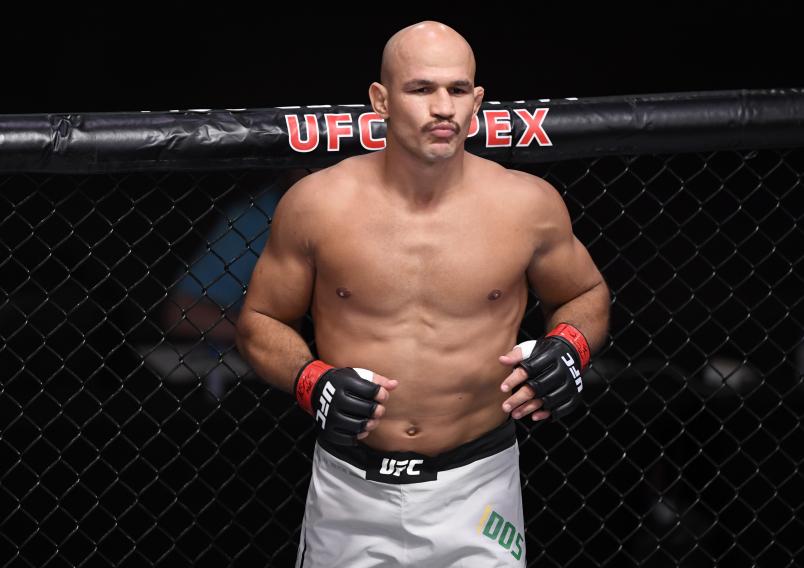 Junior Dos Santos of Brazil prepares to fight Jairzinho Rozenstruik in their heavyweight bout during the UFC 252 event at UFC APEX on August 15, 2020 in Las Vegas, Nevada. (Photo by Chris Unger/Zuffa LLC)

“I’m a smart guy and I love to be who I am and do what I do, but when I feel like it is not my time anymore, of course I will think of retiring or stepping away,” said the proud father of two. “But the way I train, the way things are going — I train very hard, I spar very hard, I do my circuits. It’s hard to find a heavyweight who trains as hard as I do.

“Everything is right there, but the results are not coming, so I have to keep going, make little changes, and make the results go in my favor.

“I’ve been on top of this division,” continued Dos Santos. "In my debut, I fought with a guy that would win the title. Since then, I’ve been fighting tough guys and it’s good motivation for me. I don’t pick my opponents and if the UFC wants to put me against these guys, it means I can give them a good show.

“I don’t try to think on the negative side of it or try to get an easier fight; it’s not my style. Besides, there are no easy fights — this is the UFC; the best heavyweights in the world are here.”

For more than a decade, Dos Santos has been part of that collection, and many believe the man he faces this weekend is poised to ascend to that same position, perhaps as soon as Saturday night. 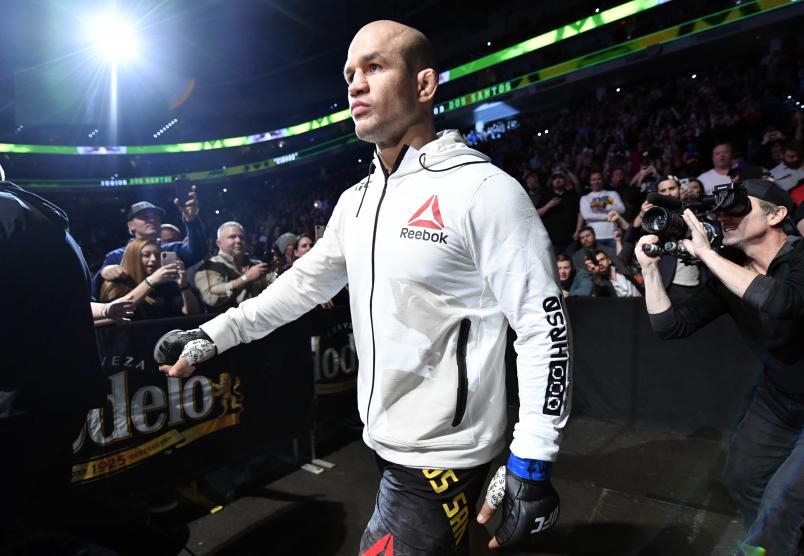 The 30-year-old Gane made his professional mixed martial arts debut on August 2, 2018. He made his UFC debut 373 days later, winning three bouts in five months to push his record to 6-0 and establish himself as the top emerging talent in the heavyweight division.

After dealing with some health issues and multiple fight cancellations, France’s “Bon Gamin” will finally make his 2020 debut on Saturday night, stepping in against the former champion in the opening bout of this weekend’s pay-per-view main card in a contest many believe is designed to elevate him to new heights.

“That’s the type of fight that I like — when there is a lot of attention, especially like this, against an undefeated guy who is coming off good wins,” Dos Santos said of the matchup with Gane, who earned submission wins over Raphael Pessoa and Don’Tale Mayes before defeating Tanner Boser by unanimous decision to wrap up his rookie campaign inside the Octagon. “For me, I feel like it’s a great opportunity to turn things around and make things happen in a good way.

“In these last fights, I’ve been thinking a lot about strategy — you have to do this, do that — and sometimes I think I’m putting too much attention on the strategy and I forget that this is a fight. You have to have a strategy, but you also have to have a warrior’s heart.

“You have to throw hands with that guy, try to kill him,” he added, immediately pausing to make sure it was clear the didn’t mean that last part literally.

“Not in a bad way,” he said with his patented laugh, “but you have to have that warrior mentality, and I think I’ve been missing a little of that.”

Just as it’s possible to interpret his recent slide two ways, there are differing perspectives one can take when looking at Saturday night’s pay-per-view opener.

Sure, many view it as a former champion being matched up against “The Next Big Thing” with an eye towards getting the emerging fighter over with the audience at the expense of the established veteran.

But it’s also a massive test for the talented, but still inexperienced Gane, and an opportunity for the Brazilian war horse to show that he’s not ready to be put out to pasture just yet.

“(Getting this victory) means everything; it means a lot to me,” Dos Santos said. “It means I will be compensated for the hard work that I put in at the gym and everything I sacrifice with my family. To get this victory is very, very important.

“I know things will not be easy, especially against this guy — he’s an up and coming heavyweight, very dangerous — but he’s the perfect guy for me to finish and open everybody’s eyes and shut the mouths of all the haters out there.”