Flyweight's Dream Of Being First UFC Champ From Mexico Finally Within Reach
By Thomas Gerbasi, on Twitter: @TGerbasi • Dec. 10, 2020

In the lead-up to his November 21 bout against Brandon Royval, Mexico’s Brandon Moreno made it clear that he thought he deserved to fight for the flyweight title that night when Cody Garbrandt pulled out of the UFC 255 main event, leaving Alex Perez to battle champion Deiveson Figueiredo for the belt.

But what was that old saying about things happening for a reason?

“Everything was surreal,” laughs Moreno. “I knew I deserved the title fight even before Cody Garbrandt and Alex Perez. Then everything happened for one reason.”

That one reason was Moreno getting his crack at Figueiredo exactly three weeks after he stopped Royval in the first round. A few fights later in Las Vegas, the Brazilian successfully defended his crown with his own first-round finish of Perez, setting up a wild chain events that now places the 125-pound standouts in this Saturday’s UFC 256 main event.

Figueiredo immediately told the UFC that he was ready to stay in Vegas and defend his title. Then Moreno got the call from his manager.

“It was crazy because in that moment, it was three weeks until the fight, so I was very nervous,” recalled Moreno. “But I talked with my head coach and he said, ‘You are ready. You don't have injuries from the fight, you're healthy, you're in shape, and you have cardio. So it's your time and your opportunity.’ And I took it because it is my opportunity to change my life.” 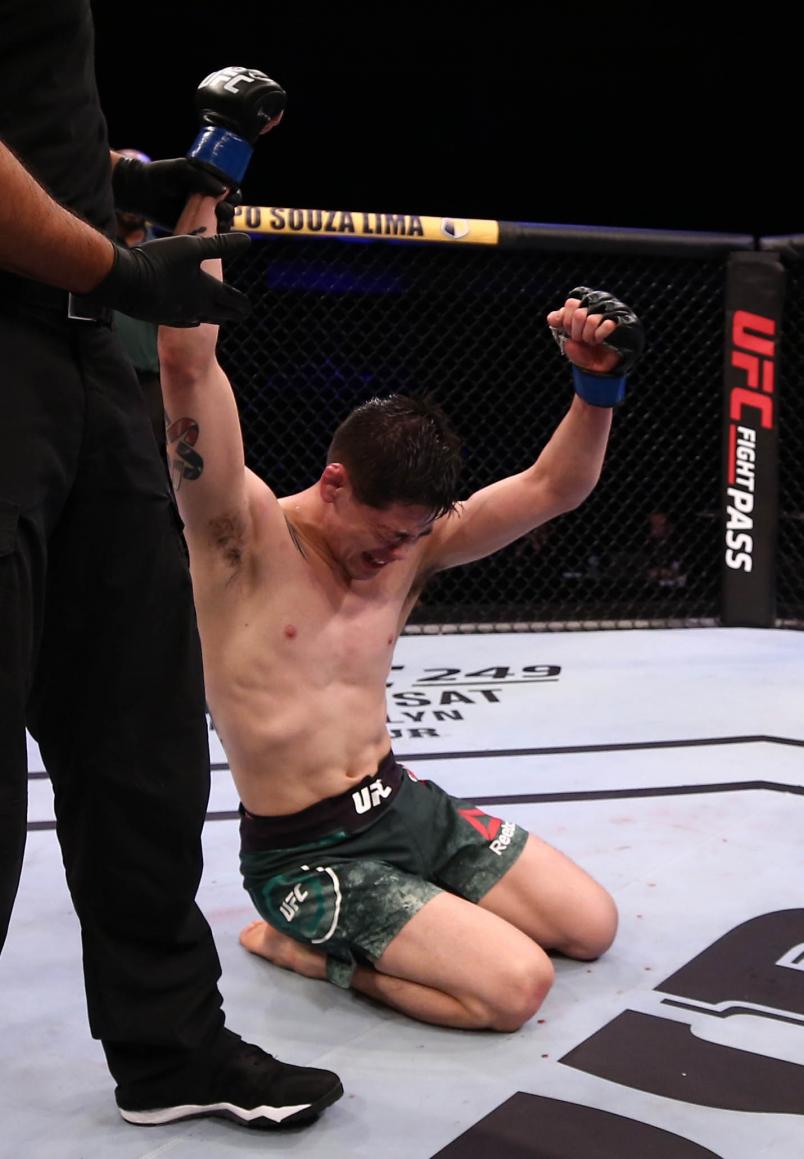 Brandon Moreno of Mexico celebrates after his victory over Jussier Formiga of Brazil in their flyweight fight during the UFC Fight Night event on March 14, 2020 in Brasilia, Brazil. (Photo by Buda Mendes/Zuffa LLC)

Hey, it’s 2020, so why not end a crazy year with the crazy story of a title fight coming together in three weeks? In fact, if Moreno goes back home to Mexico as its first UFC champion, could that be a sign of good things to come next year considering that the popular and ever-smiling “Assassin Baby” is perhaps the happiest fighter on the planet?

“Man, maybe yes,” laughs the 27-year-old. “I'm trying always to bring good vibes to the people because that gives me good vibes from the other people. That makes me feel good and I love that feeling when the people are happy to see you. This year was crazy for everybody, so good news for people right now in 2020 can be the difference.”

It’s funny what a prizefight can do for people’s spirits, but in all seriousness, a Moreno victory would be a historic one for a fighting-rich nation that has yet to see one of their own hold a UFC belt. Moreno is well aware of what a win for him means back home. 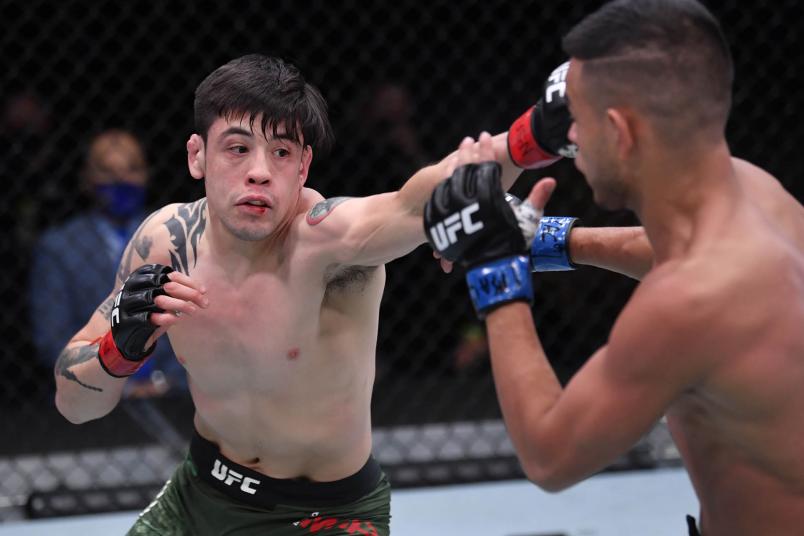 Brandon Moreno of Mexico punches Brandon Royval in their flyweight bout during the UFC 255 event at UFC APEX on November 21, 2020 in Las Vegas, Nevada. (Photo by Jeff Bottari/Zuffa LLC)

“If I win the title, everything will change so much,” he said. “We have a lot of fighters in Mexico in the UFC, trying to do something in the company and in the sport, and we have an amazing culture of combat sports with boxing, but now, with mixed martial arts, if Mexico has some good champions from the country who were raised in the country, everything changes. A lot of young guys can watch me and say, ‘I can do something in this sport like Brandon Moreno.’ And that motivates me so much.”

That’s a lot of pressure for anyone to take on, so maybe having only three weeks and not two months to think about it will help Moreno take some of that load off his shoulders. Also having his wife and kids with him in Vegas is important in keeping things as close to normal as possible before the biggest fight of his career. And truth be told, Moreno is embracing it all.

“You know what, everybody is talking about this fight,” he said. “And he looked impressive in his last fight, so I have a lot of pressure because I'm trying to change my life and trying to change the sport in my country. That's a lot of pressure, but at the same time, everybody is saying that Figueiredo can beat me easy. Okay, we'll see December 12th. I saw his last fight, but I wasn't impressed by his performance.”

This week, Moreno went to Instagram and posted a mural someone painted in his native Tijuana. It shows that he’s already made an impact, and that impact will grow substantially with a win this weekend. So, with a nation behind him, he has to feel like he can’t be stopped. But come next week, he’ll still be Brandon from Tijuana, and all he wants is to present his belt to those who have been there with him the whole time.

“My goal is that moment when I go to Tijuana with the belt with all my people in my gym, with my parents, with my family,” he said. “I imagined that moment so much.” 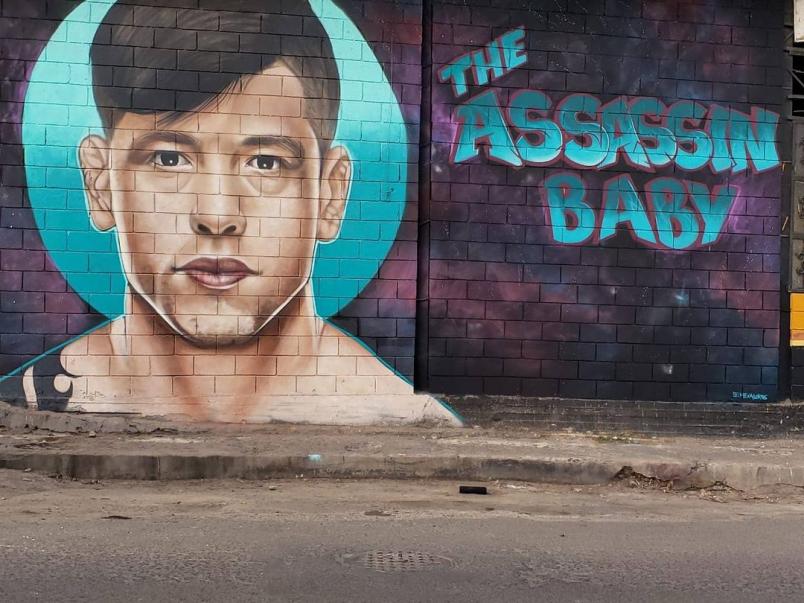