Tybura Looks To Begin A New Era In Russia

Building momentum in the fight game is an important factor and it’s something that can truly propel a fighter to reach new heights. After beating Stefan Struve last July, that is exactly what top ten UFC heavyweight Marcin Tybura is looking to achieve.

“Actually I’ve been waiting a long time for my career to start a new era or something,” Tybura said. “Because I’m not happy enough about my last three fights. I’m trying to take more risks this time, I want this fight to be better to watch. Much better, spectacular. I will be looking for a finish before times up.”

That finishing ability is something that we have seen from Tybura before in his fights against Luis Henrique and Viktor Pesta. On Saturday at UFC Saint Petersburg he will be facing Shamil Abdurakhimov who is coming off a win over Andrei Arlovski during the UFC’s first trip to Russia last September.

We caught up with Tybura to talk about fighting in Russia, what he’s been working on and what he thinks about his opponent.

UFC: Tell us a little bit about your camp. Is there anything that you did differently in your camp for this fight?

UFC: You’re fighting Shamil. What have you studied about his fighting style?

MT: I think he is well-rounded and he’s got good skills in each aspect. He can knockout people and he can submite. His wrestling is good. I also notice that he always has a plan for a fight and he sticks to it. So that was a thing for us, to try and know what the plan would be for me. And I have some tricks, more like some things I want to do. Whatever position he puts me in I have something I can do.

UFC: Where are your advantages in the fight?

MT: I mean for sure Jiu Jitsu is on my side for this. I don’t know if he wants to go for takedowns that much on me like he did with other guys. I think striking too, I really think that wrestling is on his side but I have been working with a great wrestling coach so I will be ready for anything.

UFC: How do you think the fight will go?

MT: I’m here in Russia, I’ve had three fights here and all three finished in the first round so I’m pretty sure that I will feel like home here and it will make me go back to that winning style. It’s for sure mental, I work a lot to make fights as fun as possible for the fans and I think being back here will help a lot. 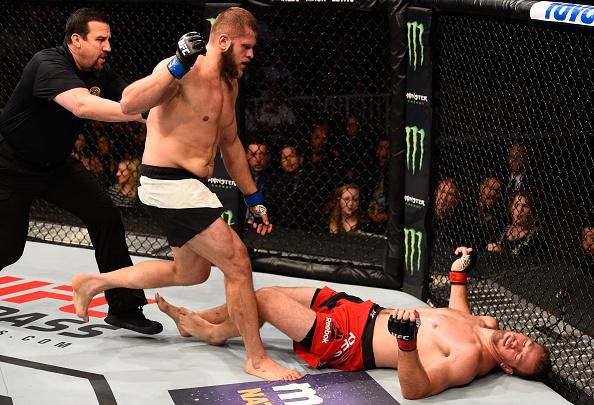 Tybura and Abdurakhimov will slug it out on the UFC Saint Petersburg prelims. The early prelims begin at 10:15am/7:15am ETPT on ESPN2 and the main card will air live on ESPN+ at 1pm/10:15am ETPT.