Mark Madsen Is All In

Mark Madsen may be the least experienced MMA fighter on the UFC 248 fight card. He's unfazed by that and it showed in his debut last year.
By E. Spencer Kyte, on Twitter @SpencerKyte • Mar. 6, 2020

The fact that Mark O. Madsen calls his UFC debut last September in Copenhagen “the pinnacle of his athletic career” tells you everything you need to know about how invested the 35-year-old three-time Olympian and 2016 silver medalist is in his transition to mixed martial arts and competing inside the UFC cage.

“The UFC is the biggest MMA promotion in the world,” said the UFC sophomore, who squares off with Austin Hubbard on the televised portion of Saturday’s UFC 248 preliminary card from T-Mobile Arena in Las Vegas. “This is like Formula 1 in racing or Champions League in soccer. This is Champions League — this is where the best MMA fighters in the world compete, and I’m just so honored to be a part of this.

“I’ve competed in the Olympics, but that was in Beijing, in London, in Rio, but being able to compete in front of a crowd like that, in mixed martial arts, in the biggest promotion in the world — I still get goosebumps when I think back.”

That bout against Danilo Belluardo was just the ninth of Madsen’s MMA career and his seventh in 21 months after deciding to hang up his wrestling shoes and re-focus his attention on a career inside the cage.

“I don’t think it could have been any better,” he said of his debut. “I stepped into that Octagon, I had no clue what was coming at me, and I actually managed to finish my opponent in 72 seconds. Thinking back on the roar from the crowd, it was an amazing experience and I’ll never forget that. No matter what happens from here, I’ll take that with me for the rest of my life.”

In addition to the typical reasons for his debut victory holding such a prominent place in his heart — competing at home, winning in impressive fashion, fighting on the biggest stage in the sport — that first foray into the Octagon also validated the difficult choices and the “Olympic Commitment” he’s made in his quest to become the best mixed martial artist he can be over these last two years.

When Madsen opted to walk away from wrestling, he not only retired from a sport where he’d had tremendous international success and competed in since he was six years old, but he also essentially quit a steady job in order to embark on another journey. His wife did the same and they went all-in on this new pursuit, ready and willing to do whatever was needed in order to achieve the next goal.

“We put everything into this and everything I’ve done over the last two years has been with one single purpose: signing with the UFC and ultimately becoming the best version of myself as an MMA fighter,” said Madsen, who had his final wrestling match on February 24, 2018.

Following that match and his official retirement from the sport, Madsen and his family shifted their focus to the next goal and attacked it with the same ferocity that helped propel him to three consecutive Olympics, five podium appearances at the World Championships, and countless accolades on the wrestling mats.

He lived in a camper away from his family in order to be closer to the best available training in his native Denmark and established his own fight promotion in order to compete on a larger platform and hopefully expedite his rise through the ranks. They eschewed birthdays and family engagements to focus on training and the myriad pieces that go into successfully competing at the highest level.

“One of the things I think is crucial when it comes to the Olympics and the UFC when it comes to performing your best is that it’s not about doing more — it’s doing less of everything else and staying focused,” explained Madsen, who has spent time in Las Vegas training at Xtreme Couture and is now considering a permanent move to the desert fight town in order to have greater access to the facilities, coaches, and training partners he needs in order to continue improving.

“When I talk about ‘Olympic Commitment,’ it’s the ability in athletes to say no to all the fun stuff because they know they have to put in the work every single day to bring them one step closer to their goal of becoming the best version of themselves and winning.”

Madsen is the most accomplished Greco-Roman wrestler to ever transition into the Octagon, and while that gives him a tremendous foundation to build upon in this new pursuit, he’s also older and much less experienced than most traditional UFC sophomores, which are two other factors he has considered throughout his two-year intensive transition into being a full-time mixed martial artist.

“I know this is a time-limited journey,” said Madsen, who cites Randy Couture and UFC 248 headliners Yoel Romero as competitors who made similar transitions and excelled into their early 40s whom he draws inspiration from. “I know that at this point of my career, I have to give everything that I’ve got. I don’t have time to go out with friends or do whatever; I have to stay professional and I have to stay focused.

“Saturday, I will be the least experienced fighter on the card when it comes to time in MMA,” he added. “But if we get into the positions that I know, I can guarantee that it will be a long day at the office for my opponent.”

When he first talked about making this transition with the goal of reaching the UFC and competing at the highest level in the sport, Madsen acknowledged that he would be “playing catch-up” with his contemporaries in the loaded lightweight division; that it would take an unwavering focus and huge leaps in terms of skill progression and overall comfort with his craft in order for him to achieve the goals he set out for himself. 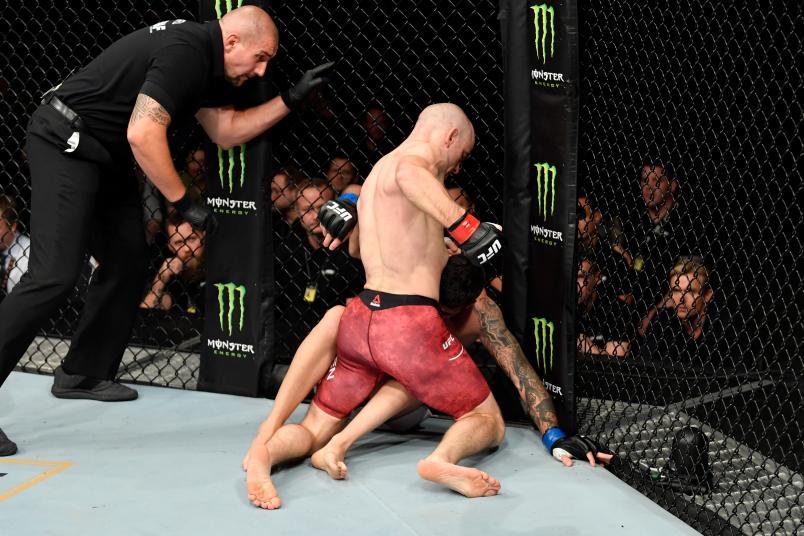 Two years later, he’s already earned a first-round stoppage victory inside the Octagon and now, he’s taking another major step forward, fighting on one of the biggest events of the year in “The Fight Capital of the World” against his toughest opponent to date.

Everything is working out as he envisioned, but don’t think for a second that means Madsen will let off the gas and change his approach.

If anything, the results of these first two years post-wrestling have only strengthened his resolve and confirmed the effectiveness of his approach, which looks like it will lead to Madsen and his family doubling down on their all-in commitment to MMA and “The Olympian” continuing his quest to be the absolute best fighter he can be when it’s all said and done.

“I’m pushing it and I’m developing as fast as possible,” he said. “I’m really fortunate that I have the background I have in wrestling and I’ve been fortunate to work with the best experts in Denmark in many areas, like Olympic-level therapists, physiologists, psychologists, so I have a lot of experience with how to structure, how to plan, how to be professional.

“I’m catching up, but I still have a lot to learn. I honestly believe that I have the potential to beat anyone in the world in the lightweight division, but the focus has to be on creating the right circumstance, which means we’ll probably end up moving here just so that I can get the right circumstances, the right training, every day.

“I’m writing a book here and the best ending would be me looking back, satisfied that I did everything I could,” he added. “It’s all about taking leaps and having faith in my abilities. It’s all-in, man.”