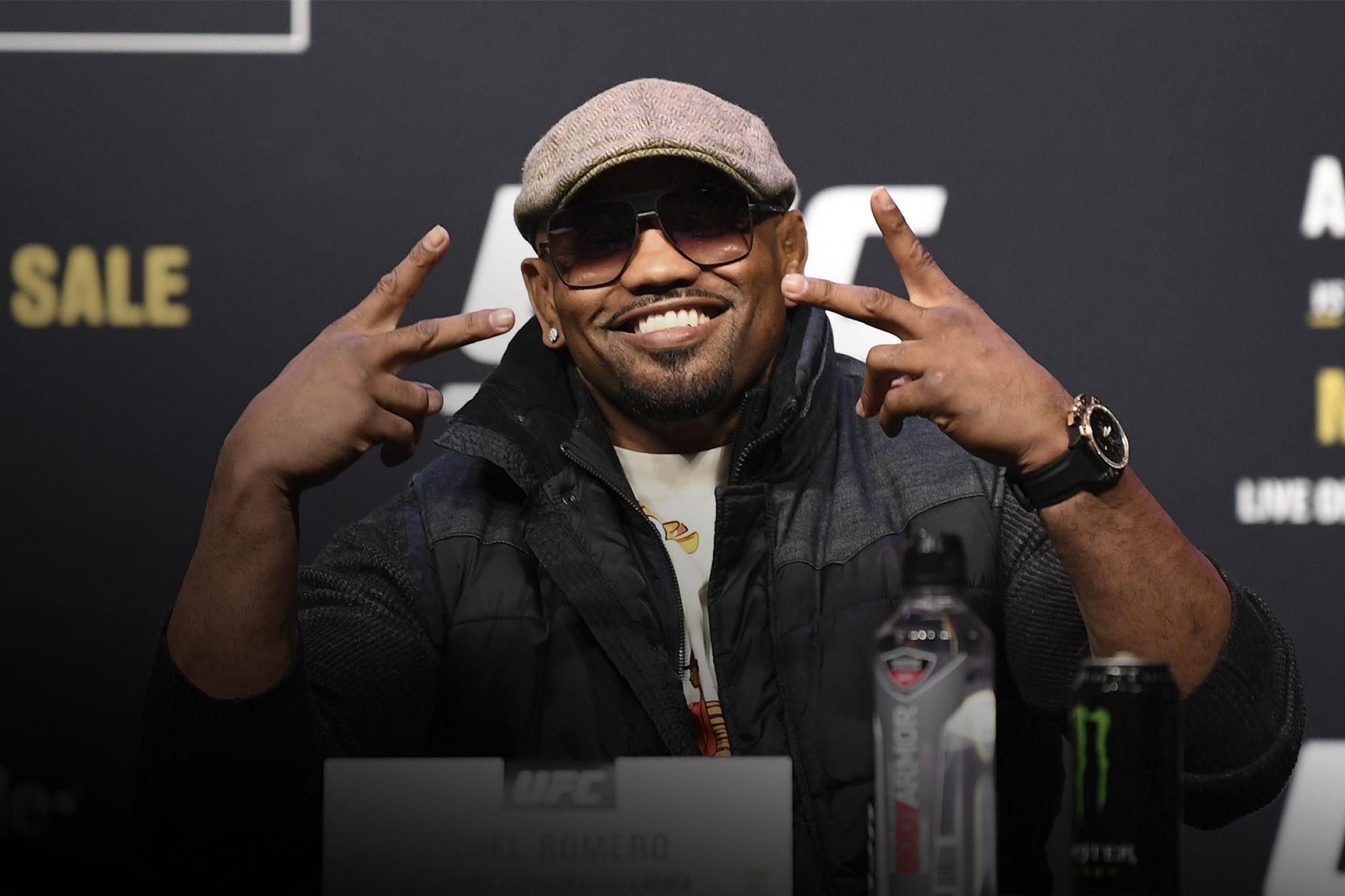 "God gave me this opportunity to fight (for the title) again because the people know, the fans know what happened in the last two fights. The fans need to understand everything I went through and that I won those fights.”
By E. Spencer Kyte • Mar. 4, 2020

There is a moment in the UFC 248 Countdown show previewing this weekend’s middleweight title fight between champion Israel Adesanya and Yoel Romero where the challenger says he’s heading to Las Vegas to reclaim what is his.

“On March 7,” he began, speaking in Spanish, with subtitles providing a translation. “I will reaffirm that I am the champion.”

Normally, when someone who is not currently, nor has ever been champion makes such a statement, the MMA Twitterverse would erupt with criticism and complaints; scores of observers questioning the temerity of the individual making the declaration.

While some will still bristle at Romero’s statement, many others will begin to gesticulate with their hands in a way that is universally known to suggest, “I can see what he’s saying,” ready to acknowledge that the 42-year-old can make a solid case for already being the best middleweight in the UFC.

Two summers ago in Chicago, Romero went another 25 hard minutes with Robert Whittaker in the main event of UFC 225 and once again, the rivals did not disappoint. Just as they had the previous summer in Las Vegas, the evenly-matched combatants battled tooth-and-nail from start to finish in an instant classic that featured more twists, turns, and moments that made you gasp than a Rian Johnson mystery.

Fight By Fight Preview | Look ahead UFC 248: Adesanya vs Romero | Fighters On The Rise

When one would inch ahead, the other would rally, and they continued on this way until the final horn sounded. Whittaker was awarded a split decision victory, but many believed Romero had done enough to unseat the Australian, including the Cuban standout.

“Absolutely,” Romero said Monday afternoon when asked if he feels like the uncrowned champion of the middleweight division. “God gave me this opportunity to fight (for the title) again because the people know, the fans know what happened in the last two fights. The fans need to understand everything I went through and that I won those fights.”

In addition to his second meeting with Whittaker, Romero steadfastly believes he deserved the nod in his showdown with Brazilian contender Paulo Costa at UFC 241.

Like his twin bouts against “The Reaper,” his clash with Costa was a good old-fashioned slobberknocker, with no quarter asked and none given. While the judges were unanimous in siding with the undefeated Costa, awarding him the first two rounds on all three scorecards, the media and the public were not quite as agreeable, believing the Miami-based veteran had once again landed on the wrong side of a questionable verdict.

Ironically, it’s those debated results that provide some of the coloring for what it set to transpire on Saturday night at T-Mobile Arena, when Romero will once again stride to the Octagon in hopes of leaving with the middleweight title over his shoulder.

After Adesanya finished Whittaker in the second round of the title unification clash last fall in Australia, he scaled the fence and offered a two-finger salute to Costa, who had a front-row seat for the action and was positioned to be the first to challenge the newly minted undisputed champion. But when Costa was forced to the sidelines, Adesanya was quick to call for Romero to replace him, suggesting that his reign over atop the 185-pound ranks would not be complete if he did not share the cage with the Olympic silver medalist.

“He didn’t say anything (false),” Romero said when asked about Adesanya’s explanation of why he sought out this matchup. “It’s true. In order to prove he’s the best, he needs to beat me.”

Again, it’s a statement that could sound forced or completely unrealistic under different circumstances, but despite Romero boasting just a single official victory in his last four fights, Adesanya’s logic for seeking out this matchup and Romero’s earnest assessment that he is the uncrowned king of the division both make a great deal of sense.

And the champion’s approach is something that has earned him the challenger’s respect.

“He has my attention and my respect now because he’s young, but he approaches it like he’s from the old school, where the best need to fight the best,” Romero said of Adesanya wanting to share the Octagon with him in order to solidify his place atop the division. “That’s why I say he has my attention now because he is approaching this like a really smart man and he wants to fight with the best.”

Listening to Romero speak about this weekend’s main event and his place in the division, you get the sense that the stoic, religious man who has sacrificed more than most could fathom in order to pursue his current athletic dreams sees all of this as fate — that his back-to-back losses to Whittaker and Costa were smaller pieces to a larger puzzle, all of which has led him back to Las Vegas and another shot at the middleweight title.

“It’s a fantastic time,” Romero said as fight week kicked off. “It’s the same place, but the opponent is different. It’s a new chance to get in there and get it done.

“It’s a chance to make justice,” he added.

And while he admits it will mean a lot to his family, the thoughtful veteran isn’t letting himself think ahead to the emotions that will wash over him should he emerge victorious on Saturday night.

“But I don’t have any idea (how I’ll feel). Until I knock him out, I won’t feel like a champion.”