Cory McKenna Is Tapping Into Her Full Potential

Following Her First UFC Setback, Cory McKenna Believes She Graduated Into A New Level Ahead Of UFC Fight Night: Santos vs Hill
By E. Spencer Kyte, on Twitter @spencerkyte • Aug. 3, 2022

Ask a bunch of professional mixed martial artists their best tale about a favorite holiday or celebration that they had to skip entirely or not really take part in, and you’re bound to be regaled with grandiose stories of missed Thanksgiving spreads three-tables long, wedding anniversaries spent cutting weight, and innumerable birthdays that became just another day in the gym on the road to stepping into the Octagon.

The latter was recently the case for Cory McKenna, as the Welsh strawweight turned 23 in early July, though the Dana White’s Contender Series (DWCS) graduate wouldn’t have it any other way.

“I’ve never really been one for celebrations, as I am so grateful and happy to live the life I do,” said McKenna, who returns to action this weekend against Miranda Granger. “There was nothing I would have (preferred to do) than train and be around my favorite people.

“This fight has been my sole focus since receiving the name,” she added, when asked if she had post-fight birthday plans. “I will be hanging around Vegas after my fight for a couple days’ vacation, though.” 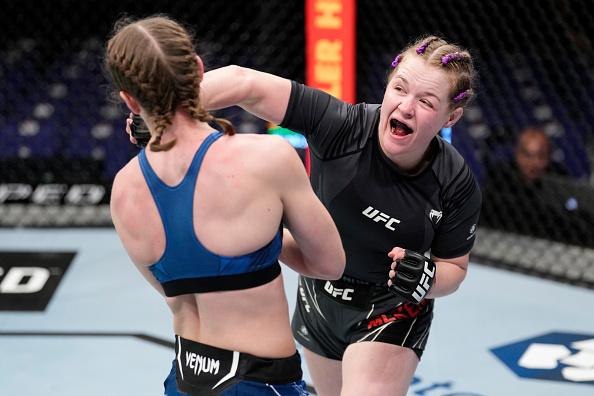 Saturday’s pairing with the returning Granger will be McKenna’s second fight of the year, as the Team Alpha Male representative competed on the London card in March.

Fighting for the first time in 16 months, she was a little slow out of the gate and ultimately couldn’t close the gap in her fight with Elise Reed, landing on the wrong side of a split decision verdict that snapped her four-fight winning streak. Now more than four months removed from the stinging setback, the young talent with high personal standards and demands of herself is able to identify some positive elements from the otherwise frustrating night of work.

“London was a big opportunity for me, and I did everything in my power to make it happen, especially given that I thought they would only be going once this year as in previous years,” said McKenna, who punched her ticket to the UFC with a win over Vanessa Demopoulos on Season 4 of DWCS and followed it up with a unanimous decision victory over Kay Hansen in her promotional debut. “It was important to me, not just because it is the largest event for UK fighters, with an insane amount of local support, but also because I knew it was likely one of the last times my father would be able to come and see me live due to his deteriorating health.

“As someone who is naturally very hard on myself and critical, it can be rather hard to find positives in a performance like that. But it certainly lit a fire under me, and I will be emphasizing a lot more urgency on getting those finishes.

“It was also my first time experiencing a full UFC event- entailing a lot more media, the large crowd, lights, cameras, etc.,” she added. “As someone who is naturally very introverted, I am proud of how I took all of that in my stride, if anything.” 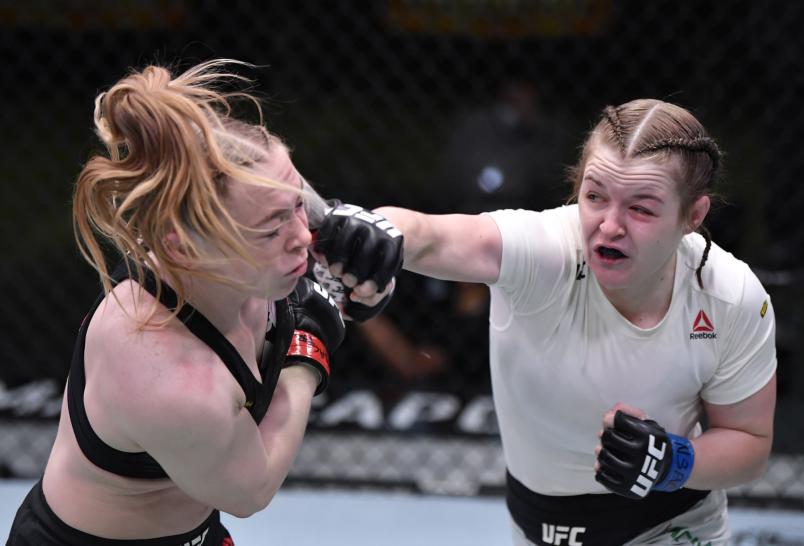 Like many young fighters in the sport, McKenna battles to find the balance between her obvious and understandable ambitions and the lofty standards she holds herself to, and not losing sight of the fact that she just turned 23, is only eight fights into her professional career, and still has an abundance of time to grow and develop as a fighter.

But between pesky writers that frequently point these things out and a room loaded with experienced competitors that have experienced so much of what this sport has to offer, the soft-spoken, hard-nosed fighter is trying to remind herself that time is very much on her side.

See Everything That Happened On Season 30 Of TUF!

“I’ve been doing martial arts for over half my life, so I certainly don’t feel young in this sport,” said McKenna, who made her amateur debut on September 27, 2014, and turned pro three-and-a-half years later. “It can be hard to slow myself down at times, as I have always been very driven.

“But as you and many others always remind me, I have plenty of time and I am being mindful in investing in this career of mine as opposed to rushing it. I am fortunate to have gotten to where I have, and I intend to stay here for a long time.”

And having that longevity in the UFC comes with making adjustments to your approach — learning from past mistakes and leaning on those with more experience to provide you guidance in regards to the best ways to ensure that happens. 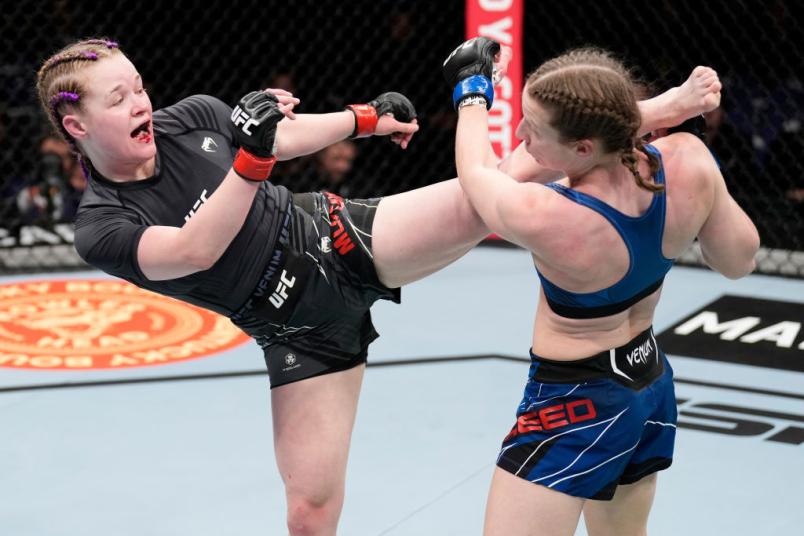 To that end, McKenna couldn’t be in a better place when it comes to training with Team Alpha Male, as the Sacramento outfit has produced champions, contenders, and a number of tenured UFC talents over the years.

“I am very fortunate to be here,” McKenna said of working with the crew headed up by Urijah Faber. “I have genuine love for this team; they’re like and extension of my family. They’re all super supportive, with an abundance of knowledge.

“I love being surrounded by so many like-minded people,” she continued. “I’m always guaranteed work and support, and that allows me to live the lifestyle I’ve always wanted to live.”

RELATED: Fight by Fight Preview | Fighters on the Rise

Despite the frustrations of her loss in London, McKenna wasn’t actually seeking a relatively quick return to the cage, content to stay in the gym, put in work, and continue working on “Cory 2.0” as she called herself in an Instagram posted several weeks after her setback on British soil.

But when the UFC called to offer her this matchup with Granger, she jumped at the opportunity. 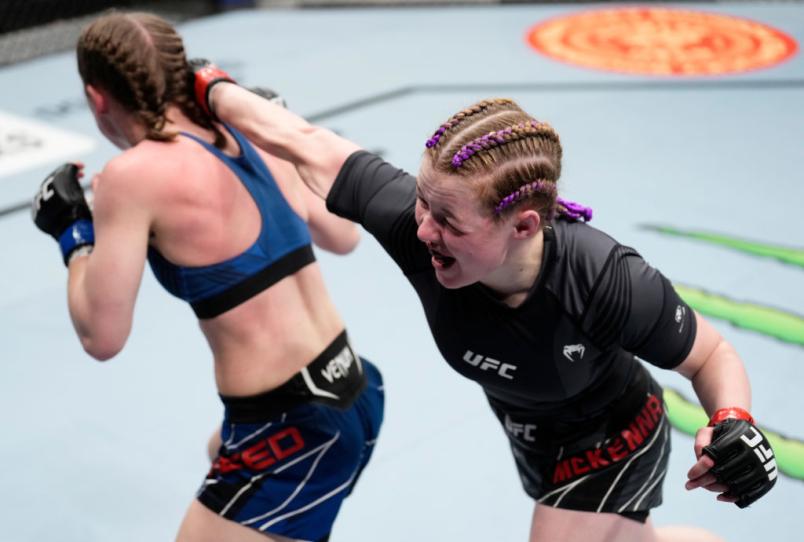 “In truth, I wasn’t pushing for a fight, but when they proposed the Granger fight, we liked the time frame and matchup, so it made sense to take it,” began McKenna, who carries a 6-2 record into Saturday’s preliminary card contest. “I had taken some time after the last fight to recover and make the adjustments needed.

“She fought on the same card that I made my UFC debut on, against Ashley Yoder, who I had trained with a little prior,” she said when asked about her level of familiarity with Granger. “I saw that fight, but aside from that, I didn’t know too much.

“I like the match up, stylistically — I feel like we are both girls who are happy to take the fight wherever it needs to go, and I am excited to go out and put on a fun fight for everyone.”

More than anything, she’s eager to put the disappointment of her last outing behind her, build on the lessons learned in London and the months that followed in the gym, and show everyone what “Cory 2.0” is capable of inside the Octagon.

“‘Cory 2.0’ is happy and healthy, ready to display her full potential on August 6,” McKenna said, when asked about the moniker and her evolutionary progress. “I am honestly very confident in my striking and have found a lot of success in my grappling.

“One thing’s for certain: I’m going to do everything in my power to secure a dominant win.”