Closing In On His 60th Professional Fight, Clay Guida Is Chomping At The Bit To Fight In Front Of A Packed Arena At UFC Fight Night: Thompson vs Holland
By Zac Pacleb, on Twitter @ZacPacleb • Dec. 2, 2022

When Clay Guida makes the walk to the Octagon in Orlando’s Amway Center on December 3, he’ll bounce his way to his 57th professional fight five days shy of his 41st birthday. For the better part of 19 years (16 under the UFC banner), the veteran from Johnsburg, Illinois, has been a model of humble consistency.

When asked, though, Guida is pretty apathetic about the milestone.

“I lost track a long time ago,” Guida told UFC.com. “Friends, family, teammates, they all keep track of that stuff. I’m just here to go out there, have fun, enjoy every moment. Every time, we’re blessed, we get to go through a great camp. Just going out there and competing, that’s all that matters to me now. Numbers, leave those for the statisticians and the record-keepers, and we’ll just keep breaking records.” 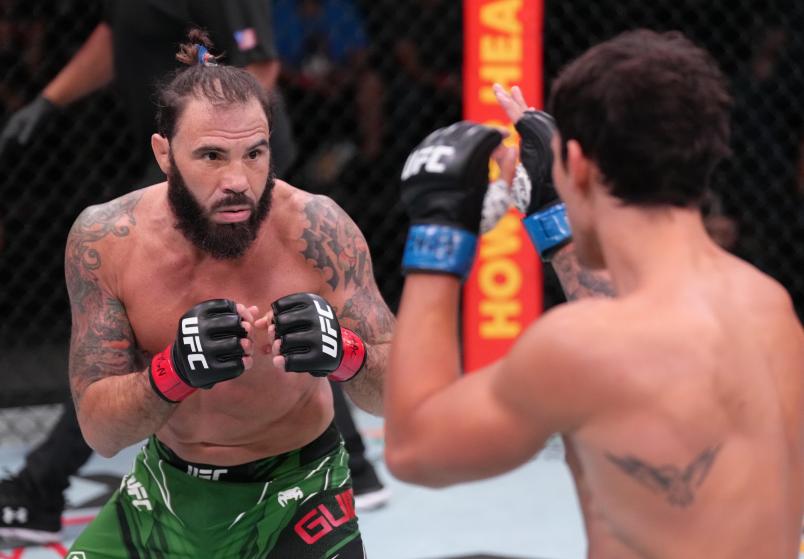 In terms of records, Guida’s name is all over the UFC’s books. He is tied for and will take sole possession of fifth most fights (33 before UFC Fight Night: Thompson vs Holland). He ranks third all-time for total control time (2:26:30), fourth for top position time (1:45:22) and eighth for total fight time (6:14:36). He is already a Hall of Fame member for his wild fight against Diego Sanchez in 2009, which is one of those core memories for many athletes on the roster today.

It’s all part of the journey for Guida, however, and it’s a journey he seems unabashedly intent on continuing as he goes deeper into his 40s.

“I love the thrill of the hunt,” he said. “I love just getting out there and swinging for the fences. Biting down and just literally getting to break somebody’s will. There’s nothing like it. Some people call it barbaric. Call it what you want. It’s one of the fastest growing, coolest sports in the world, and I’m very blessed to be part of it.”

Guida also cites the camaraderie and travel opportunities as his favorite parts of competing at the highest levels. Nothing, however, replaces testing himself against the toughest guys possible.

After going 2-2 in his last four fights, Guida has his sights set on 39-year-old Scott Holtzman. “Hot Sauce” steps into the Octagon for the first time since April 2021 and is coming off a pair of knockout losses to Beneil Dariush and Mateusz Gamrot.

He does have a Fight of the Night victory over Jim Miller as well as a stoppage win over Dong Hyun Ma and, crucially, Holtzman has the respect of Guida, who is feeling like a “well-oiled machine” ahead of his next test.

“Scotty is battle-tested,” Guida said. “The guy looks like he’s right off the cover of Men’s Fitness, Mr. Olympia magazine. He’s fought some really tough names. He’s been in there with a lot of great athletes, but he hasn’t seen the likes of The Carpenter… Hurricane Clay is going to rip through Orlando on December 3, and he’s going to see something he’s never felt before.”

Although Guida is never short of energy and enthusiasm, he has a little more fuel going into UFC Fight Night: Thompson vs Holland. For the first time since August 2019, Guida gets to fight in front of a capacity crowd. 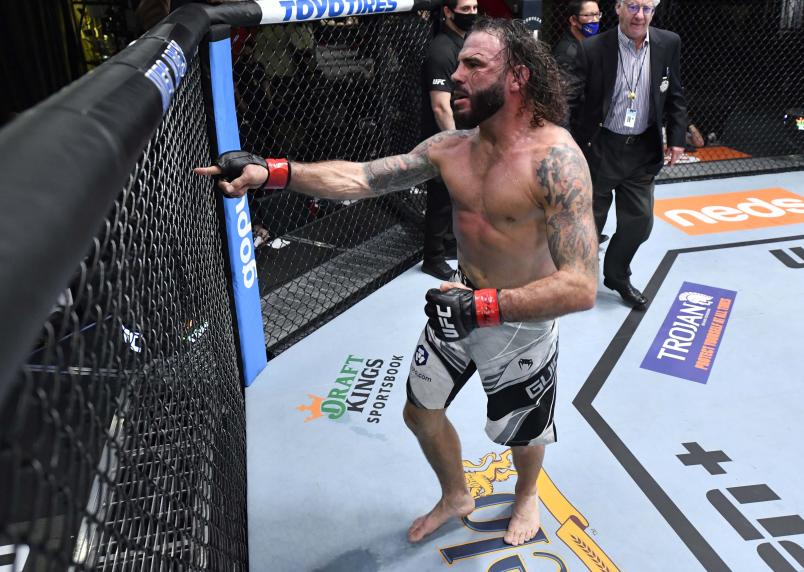 Clay Guida reacts after his submission victory over Leonardo Santos of Brazil in their lightweight fight during the UFC Fight Night event at UFC APEX on December 04, 2021 in Las Vegas, Nevada. (Photo by Jeff Bottari/Zuffa LLC)

Each of Guida’s previous five fights took place in the UFC APEX, and while he was grateful for the opportunity to compete through the COVID-19 pandemic and beyond, nothing beats the rush of fighting in front of adoring fans.

“I’ve been locked in a cage for a long time, over a full contract,” Guida said. “I cannot wait to get in that full-sized Octagon in front of our hometown, Florida crowd because this is a fighting state, and we’re going to fight for Florida. Man, you’re going to see The Carpenter come unleashed come Saturday night.”

READ: See Which Fighters Are On The Rise At UFC Orlando

Mixed martial arts is not short of unique icons, and Guida is right up there among them for a variety of reasons. On December 3, he adds another milestone to his career, but perhaps the most impressive part is the fact that he looks the furthest thing from slowing down.

“I knew we were built to last,” he said. “Longevity is what we’re known for, and hard work, so it’s just like anything. You put the hard work in, and you see the results. We’re here to stay.”