Fight cards like this weekend’s return to Orlando are honestly my favorite.

Sure, I love a loaded pay-per-view as much as the next person, and I have a soft spot for low-key events filled with prospects, grimy veterans, and fun matchups throughout, but events like this one offer a quality blend of bouts carrying divisional significance, guaranteed barnburners, and early-run litmus tests that tick all the boxes for me.

This is an outstanding card to kick off the final month of the 2022 UFC campaign, and these are the three ascending talents folks should be paying close attention to this weekend in Orlando.

Five weeks after making his debut in this space ahead of his fight with Phil Hawes, Dolidze returns for a “this is your last chance” appearance after jumping into a short-notice fight with Jack Hermansson this weekend.

The Georgian middleweight is 11-1 overall and coming off the two best performances of his career — a first-round win over Hawes at the end of October where he wrenched the former Dana White's Contender Series winner’s knee before sending him crashing to defeat, and a 73-second finish of Kyle Daukaus in June. He has reasonable size for the division, has shown his fight-ending power of his last two starts, and is still putting all the pieces together, having only made the transition to mixed martial arts in 2016.

After debuting with an impressive finish at light heavyweight, Dolidze’s next three fights were all low-output grinds that went the distance, which left fans and media with certain ideas about the 34-year-old middleweight. He changed those perceptions with his win over Daukaus and showed it wasn’t a one-off with his dominant showing against Hawes, and now has the chance to catapult himself into contention if he can get past Hermansson this weekend in Orlando.

“The Joker” has settled in as the dangerous test hopefuls need to pass in order to climb into the top tier in the middleweight division. While he’s alternated wins and losses over his last seven outings, those three losses interspersed between those triumphs came against two title challengers and another top contender, Sean Strickland, in a narrow split decision defeat in February.

This is a big opportunity for Dolidze and the right kind of short-notice matchup to accept given his current run and station in the 185-pound ranks. A victory sends him into next year on a four-fight winning streak and mostly likely with a single digit next to his name, while few will fault him if he comes up short in a challenging assignment like this with limited time to prepare.

When you can land an assignment that is almost all upside, you take it, and now we wait and see if Dolidze can make the most of it this weekend. 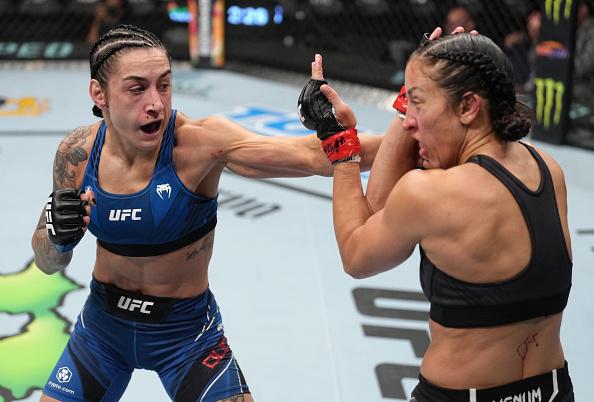 Ducote made her promotional debut in July, earning a unanimous decision win over former title challenger Jessica Penne. Now, a little less than five months later, she looks to claim a second consecutive UFC victory and a fifth straight win overall when she steps into the Octagon with Penne’s close friend, training partner, and the other half of the “Two Straws” podcast, Angela Hill.

The 28-year-old newcomer was sharp throughout her clash with Penne, landing at a good clip from the outset, establishing herself as a factor in the division and someone to watch in the opening five minutes. Contested exclusively on the feet, Ducote nearly doubled up Penne in terms of strikes landed, and did a much better job of varying her attacks, chopping away at the long, available legs of the veteran contender from the outset and mixing targets with her punches.

It was a quality effort to begin her UFC tenure and rightfully elevated her into the rankings after just a single appearance, and now she has the chance to take another step forward before the year is out by toppling Penne’s good friend on Saturday in Orlando.

Alexander Volkanovski: Beating Makhachev Could Make Me One Of The Best Ever

The 37-year-old Hill snapped a three-fight skid in August with a unanimous decision win over Loopy Godinez, cementing her status as a tough, veteran presence in the lower third of the rankings. While she’s just 2-5 in her last seven and 5-5 over her last 10, Hill has been in a heap of ultra-competitive fights against ascending talents like Ducote and more established names, as well, and though things haven’t always gone her way, she is the kind of indefatigable, durable fighter that is going to make her opponents work for every inch of ground they gain and penalize them for any mistakes they make in the fight.

This is the proper next step for Ducote, who won and defended the Invicta FC strawweight title before matriculating to the UFC. The division is flush with contenders at the moment, and rather than hustling “Gordinha” into the fray, making sure she can successfully navigate a challenging assignment like this one before giving her an even bigger test makes a great deal of sense.

Despite Hill’s struggles as of late, beating her still carries a great deal of weight because those wins are always hard-earned, and if Ducote claims a victory this weekend, the 115-pound ranks will have another contender to deal with in 2023.

Pearce is one of the more intriguing “under the radar” competitors in the UFC at the moment.

The 30-year-old Tennessee native, who trains with the Fight Ready crew in Scottsdale, has quietly put together four straight wins since moving to the featherweight division following a first-round stoppage loss to Joe Lauzon at lightweight in his promotional debut three years ago. Three of those victories have come by stoppage, including a second-round finish of Makwan Amirkhani this summer in London.

A graduate of Dana White’s Contender Series, Pearce is one of those guys that turns up, handles his business — usually in impressive fashion — and then recedes into the shadows, returning to the gym to keep working on his craft, opting to let his efforts inside the Octagon speak for him.

Winning four consecutive bouts in the UFC is difficult, regardless of division or opponent, and doing so with three finishes, against the solid competition Pearce has fought thus far, should be garnering more attention.

Maybe some of the excitement was lessened by the fact that he had to battle hard to defeat Christian Rodriguez in February, the short-notice newcomer somehow being the only opponent he’s faced at featherweight that didn’t get finished, which stands out because Rodriguez is a natural bantamweight. But Pearce still claimed victory, and got back to his dominant ways in July, navigating a competitive first round against Amirkhani before getting “Mr. Finland” out of there late in the middle stanza.

This weekend, Pearce faces another divisional stalwart in Darren Elkins, the longtime Top 15 fixture who remains a solid measuring stick for ascending fighters. After losing four straight between July 2018 and May 2020, “The Damage” has gone 3-1 over his last four, most recently collecting a unanimous decision victory over Tristan Connelly in April.

While there are no guarantees that people will sit up and take notice should he win this weekend, a five-fight winning streak is pretty difficult to overlook, especially if Pearce continues to show his finishing skills and dispatches the notoriously durable Elkins inside the distance.

Featherweight is loaded with talent now, and although another win still isn’t likely to elevate “JSP” into the rankings, it should put him in a position to face someone with a number next to their name next time out.