Early In His Career Adrian Yanez Learned To Never Overlook An Opponent. He'll Take That Same Mentality Into His Bout This Weekend Against Randy Costa At UFC Fight Night
By THOMAS GERBASI, ON TWITTER: @TGERBASI • Jul. 22, 2021

It’s easy to wonder where Adrian Yanez came from. In a business where punching people in the face is part of the job description, he’s one of the most affable, well-adjusted folks you’ll run into. If you never talked to him, seen him interact with fans on social media or watched him fight, you would think he was a mythical character.

He is real, though. And he is human. So, while he’s as humble as can be in the lead-up to his third UFC bout against Randy Costa this weekend, that wasn’t always the case.

“I drank all my Kool-Aid as an amateur,” laughs Yanez, who was 6-0 with four knockouts before entering the punch for pay ranks, and when he did in March 2014, the good times kept rolling when he halted Richard Delfin in the third round.

So when he was matched up with debuting Levi Mowles for an LFC bout in November of that year, Yanez had no doubt that he was going to have another notch in his belt by the end of what he assumed would be a quick night.

“I was looking at my knockouts, and was like, ‘Man, this is so good. I'm gonna run through this guy. All I gotta do is hit this guy once, he hits the floor, I'm done.’”

“Boy, did I get proven wrong,” he said. “First round, I’m boxing with my hands down. Next thing you know, one bad step and I get caught against the cage and he hits me with a good overhand right, cracks me right on the chin, breaks my jaw. After that, I was fighting on pure heart, pure instinct and doing anything I could do because my body was shutting down.”

The Houston product went the three-round distance, but he left the Arena Theater in his hometown with a 1-1 record and a lot to think about.

“That loss hit me really, really hard and I had three months of thinking about it,” Yanez recalls. “It was the worst thing to happen, but it was also the best thing to happen because I never overlooked an opponent again.”

The results have reflected that change in mindset, with Yanez going 12-2 since the Mowles fight. In the process, he’s become one of the top prospects in the sport and one growing in popularity. Yet despite how good things are these days, he doesn’t take any of his success for granted.

“Life to me has been nothing but blessings,” Yanez said. “I'm grateful for all these opportunities that have been coming my way and it's been life-changing. I've worked so hard just to get here, and now that it's starting to pay off, it means a lot more to me. If it would have come to me when I was 4-0 or 5-0 and didn't really have those trials and tribulations outside the UFC, I don't think I would have that same feeling of being grateful about the opportunities. Now, I got into the UFC at 26 years old, I'm 27 now and I had a lot of life-changing things that happened to me from 18 to 25, so at 26, 27, I'm just enjoying everything that's going on. I've been loving it.”

Yanez is getting that love back, with his social media following on Twitter jumping from two thousand to over 12 thousand at the moment, a progression likely in part to his willingness to engage with his fans on the platform.

“I think it's just a testament to me responding back to people,” he said. “I think people love that and love me just being me.”

That is a lot of responses to get to, though.

Given this attitude, it’s no surprise that one of the most eagerly anticipated fights of this weekend is between Yanez and fellow power puncher Costa, and it’s not just because the two rising bantamweight stars have dynamite in their fists. In fact, it came together as a battle between a Dr. Pepper afficionado (Yanez) and a diehard fan of Reese’s (Costa).

“Besides the whole Dr. Pepper and Reese’s thing, it was just something different,” laughs Yanez. “He (Costa) gave me props and someone said, ‘Don't be scared, fight him.’ And he was like, ‘Don't get me wrong, I might like this guy and I can appreciate his skills, but I'll go out there and fight him.’ I remember seeing that Tweet and being like, I like this; this is really cool. I like his confidence and how he wants to go out there and fight. So yeah, I'd fight you, too.”

It is, but it is refreshing to see two top prospects putting it all on the line at this point in their career and doing so without any pre-fight animosity or trash talk.

“I don't need to make a fake persona or hype myself up to fight because I love fighting itself, and if I could fight somebody who feels the same way, it's gonna make for a great fight,” said Yanez. “Randy's gonna go in there and storm to the middle of the Octagon and be like, let's fight. And I'm gonna meet him there happily.”

That wasn’t the case in Yanez’ March fight with Gustavo Lopez, as Lopez had plenty to say about the bandwagon filling up for his opponent before the Octagon door shut. And when it did, Yanez had the last word. 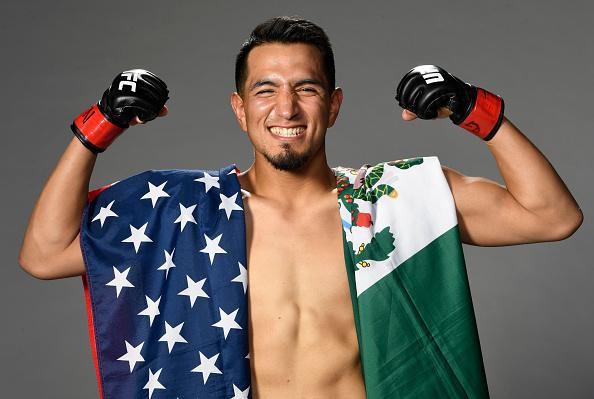 “I've never really walked into the cage and been super happy that I'm about to get punched in the face,” he laughs. “But especially with this last fight, coming in, I had nothing but respect for Lopez and I had good things to say about him, and he was out in interviews saying, 'Who has he fought?' And he was kinda diminishing what I've done, so I looked at that and I didn't like that he was saying all that. If you have to hype yourself up for a fight, then do that, but don't question my resume or anything like that because I worked my ass off to get here. But whenever we get into the cage, I'm gonna show you who I am.”

He did. And he’s going to do it again this weekend. Only this time, it will likely be with a smile on his face. Why? Because this is where he wants to be.