Adrian Yanez: Living In The Moment

Adrian Yanez Isn't Afraid To Be Star Struck Or Be Emotional, He's Living His Dream And He's Excited For The Journey To Continue At UFC Fight Night: Brunson Vs Holland
By Thomas Gerbasi, on Twitter: @TGerbasi • Mar. 19, 2021

In the lead-up to his UFC debut against Victor Rodriguez last October, Adrian Yanez spoke of being on the same card as one of his fighting heroes, Anderson Silva.

On the Thursday of fight week, “The Spider” appeared.

“I was so nervous that I didn't even ask for the picture,” laughed Yanez, who luckily had one of his training partners with him who did ask for a photo with the middleweight great. Yanez then spoke up.

“Can WE take a picture,” asked Yanez, and there he is, smiling with Silva just before he had to go in to cut weight for his own fight. But after meeting Silva, that process didn’t seem so daunting anymore.

“That was the highlight of my day and it made weight cutting so much easier.”

If that wasn’t enough, Yanez then ran into the man headlining this Saturday’s UFC Fight Night event, Kevin Holland, and Holland knew who his fellow Texan was before words were shared.

“You know me?” said Yanez, and it’s more than evident that despite being 1-0 in the UFC heading into his second Octagon bout against Gustavo Lopez tomorrow, he is as much of a fan of the sport as any of the fans on social media. It’s always been that way and will likely never change.

“I started off as a fan,” he said. “That was the biggest thing for me. Growing up watching boxing, I was a fan of it, and fighters were always like role models for me. One of the biggest role models that I had was Manny Pacquiao. So the way he is, very humble and everything like that, that's something to marvel at. Even now, I'm seeing all the people that I've been a fan of, and being able to train alongside those guys is pretty cool and fighting on the same card is really cool. I'm always gonna be a fan because I know how tough fighting is. I've done it for ten-plus years already and, to me, if you chose to entertain people by stepping into a cage, ring or Octagon and fighting, that, to me, is very commendable. You're out there like a gladiator, you're a warrior. To me, whoever steps in there, you've got all my respect and all my admiration.”

At 27, the Dana White’s Contender Series graduate is starting to get plenty of fans of his own, and there is no hesitation for the Texan when it comes to interacting with those who contact him. He remembers as an 18-year-old tweeting at former light heavyweight champion Jon Jones and getting a reply. He never forgot the way that made him feel, so he’s not going to disappoint anyone in the same shoes as he was.

“Jon tweeted back at me and I was like, 'Oh my goodness, this is so cool. Jon Jones tweeted at me.' So I always had that thing where if I ever got to that position, and I don't think I'm Jon Jones by any means at all, but if somebody tweets at me and takes their time out to do that, of course I have no problem replying. That's really cool, and if I can make someone's day that way, then I'm a hundred percent behind it. I don't mind it at all.”

If it sounds like Yanez is taking to this whole “being a UFC fighter” thing pretty well, that’s accurate. But it’s not restricted to social media. Following his contract-winning 39-second knockout of Brady Huang last August, he was just as composed and deadly in his UFC debut, as he halted Rodriguez in less than three minutes, picking up a Performance of the Night bonus in the process.

UFC jitters? Not for this fighter on this night, and that calm in the heat of battle is something he credits his longtime coach Saul Soliz with bringing to him. 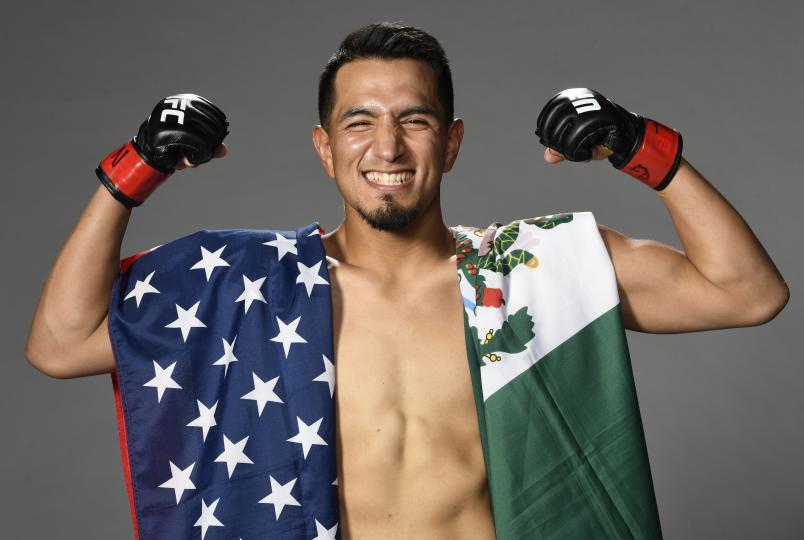 “Coach always says, ‘You just have to live in the moment,’” said Yanez. “Back when he was training Ricco Rodriguez, Tito Ortiz and Carlo Prater and all those guys back in the day, even Michael Bisping on The Ultimate Fighter, he says you've got to soak up the moment while you're in it because one day it's not gonna be here. So while in that moment of me getting ready for the UFC fight, there was a point in time when I had gotten nervous, but it quickly faded away because I just started realizing that this is exactly what I want to do. I'm living my dream. I quit my job, I'm dedicated to this full-time, I'm living the dream that I set out for myself and I worked hard to get there. Why am I nervous? And the nerves went away once I started thinking that way.”

Those words of wisdom stuck with him, even during his walkout.

“Halfway through the walkout, I was trying to put on an angry face but after a while, I was like, I'm not angry at all; I'm happy,” he laughs. “I'm loving this. I get paid to fight. This is amazing to me.”

Then he went and delivered a debut to remember against Rodriguez. The stakes have grown higher for his second bout against Lopez, but guess what? Yanez is still smiling because hey, if it ain’t broke, don’t fix it.