Darrick Minner will be the first to tell you that there was a major shift in his skills once he joined James Krause’s Glory MMA squad. And after a tough loss to Grant Dawson in his UFC debut, Minner tapped into the “if you can’t beat them, join them” mentality and joined Dawson and company out in Lees Summit, Missouri.

For a fighter with 35 professional fights, it was a big decision for Minner to switch things up. But Minner knew what he needed and what kind of atmosphere would help him succeed in the UFC. The move paid immediate dividends, as Minner would go on to submit TJ Laramie in under a minute and then defeat veteran Charles Rosa by unanimous decision.

At 31 years old, Minner feels like he’s not only hitting his stride at the right time, but he’s geared up to make some serious noise in the UFC’s featherweight division. The next challenge for Minner is featherweight stalwart Darren Elkins at UFC Fight Night: Sandhagen vs Dillashaw.

And it’s a challenge that Minner can’t wait to overcome.

"I’m on a two-fight win streak and I don’t plan on slowing down."@DarrickMinner discusses his momentum heading into #UFCVegas32 and what he thinks about his match-up with Darren Elkins 🔊⬆️ pic.twitter.com/DhHwxtExen

“I just feel like this is a fight where I’m going to be able to expose my all-around game from my transitions, from my standup to my wrestling, to my ground, everywhere, I think. Darren Elkins is the perfect opponent for that,” Minner told UFC.com. “It gets me that veteran of the UFC win and it gets me on to the top 20, top 15 guys. Darren Elkins is kind of that guy that if you beat him, you’re in the top 20 or top 15 and you get a big fight next.”

Cracking the featherweight rankings is not an easy task, especially considering that it’s one of the UFC’s deepest divisions. Yet Minner believes that he’s coming into this fight with Elkins on the rise, both in terms of his stock but also in terms of skill set, and that he’s primed to display why he should be getting a big fight next.

“Of course, momentum plays a factor; I’m on a two-fight win streak and I don’t plan on slowing down,” Minner said. “I’m just getting better, and it really solidifies what my coaches are doing with me and how much I’ve improved with the team down at Glory MMA .It’s just going to carry right over into this fight.”

If you’ve ever watched a Darren Elkins fight before, you know that “The Damage” is one tough son of a gun. Minner looks forward to testing himself against Elkins’ trademark toughness and doesn’t believe he will get discouraged by Elkins’ relentlessness. 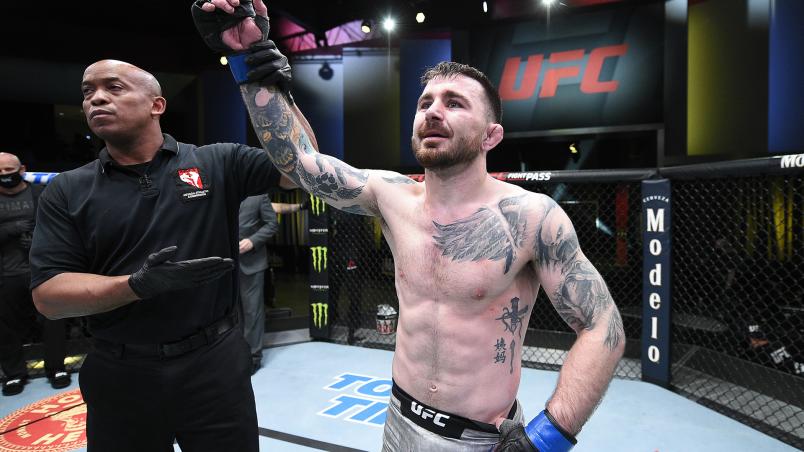 Derrick Minner reacts after his victory over Charles Rosa in a featherweight bout during the UFC Fight Night event at UFC APEX on February 20, 2021 in Las Vegas, Nevada. (Photo by Chris Unger/Zuffa LLC)

“The dude is tough, and he keeps coming all three rounds. He’s tough, he’s a good fighter, and I plan on showing a good fight on Saturday,” Minner said of Elkins. “I’ve been at this game a long time; I think that James Krause and my coaches at Glory MMA have me prepared for what Darren Elkins brings to the table, even with his toughness.”

With 22 of Minner’s 26 professional wins coming by stoppage and Elkins having just three losses due to stoppage in his 11-year UFC career, something has got to give. For Minner, it’s all about sticking to the gameplan and making sure the fight takes place where he wants it to.

If he can do that, Minner believes he will make a big statement on fight night.

Don’t miss any of the action when Minner takes on Elkins on the main card of UFC Fight Night: Sandhagen vs Dillashaw. Watch the main card at 7pm ET / 4pm PT on ESPN and ESPN+