Aspen Ladd Is Back Where She Wants To Be

After 19 Months Away From Competition, Aspen Ladd Returns Healthier And Happier Than Ever At UFC Fight Night: Sandhagen vs Dillashaw
By Zac Pacleb, on Twitter @ZacPacleb • Jul. 22, 2021

Aspen Ladd can’t keep the smile off her face.

On a basic level, it’s understandable. Almost all fighters enjoy fight week to some extent, even if it’s just because they know the light at the end of the tunnel leads them to the Octagon. But for Ladd, this one is particularly special as it’s her first such week in 19 months after tearing the ACL and MCL in her right knee.

“Because I’ve been away so long, and I’ve had to deal with so much to get back, fight week feels different this time,” Ladd told UFC.com. “Different in the excitement level. It’s almost like this is a new thing. It’s not new in what I’m doing, but it’s new in the experience of like, I’m so grateful to be here at this point.”

The injury occurred just days before Ladd was scheduled to fight Sara McMann in Las Vegas last June. So, instead of attending to the various duties in the days leading up to a fight, Ladd underwent surgery to repair her knee.

Afterward, for about six weeks, Ladd couldn’t do either of her favorite things: train or hike.

Not being able to hit the mat or trailhead for such a long period of time was a “really awful” period for the 26-year-old. Eventually, though, she was well enough to start moving around, but even just walking a mile took the 26-year-old 50 minutes.

“I had a big old brace on, and I had to position my foot to walk right,” Ladd said. “I had to relearn how to walk. That’s something you never think of in your life. That was probably the worst part. I mean, it was painful, but just not being able to either train as you want to train – all you can do is physical therapy – or hike. Oh my God. I was going nuts.”

And so, the recovery process began. Instead of training for another fight that would put her one step closer to a title shot, Ladd gave her full attention to physical therapy and rehab. She credits her head coach Jim West, physical therapist Russell Dunning, as well as Dr. Tim Angelo, for keeping her physically and mentally afloat during the painful, tedious days, saying they were the “voices of reason” who “lost sleep” over her.

Ladd is pretty matter of fact about the whole experience, kind of glazing over what she called the “little, awful things” during rehab, and she grew to appreciate the step-by-step rebuilding over her movements.

“Even just basic boxing, basic Muay Thai, you’re trying and being so careful with your placement,” Ladd said. “You’re being so careful with how you move because you have to relearn how to move. I think that was very beneficial for me, just getting very back to the detailed basics of everything.”

With that in her rear-view mirror, the always-stoic Ladd is buzzing a few days out from her fight against Macy Chiasson at UFC Fight Night: Sandhagen vs Dillashaw. 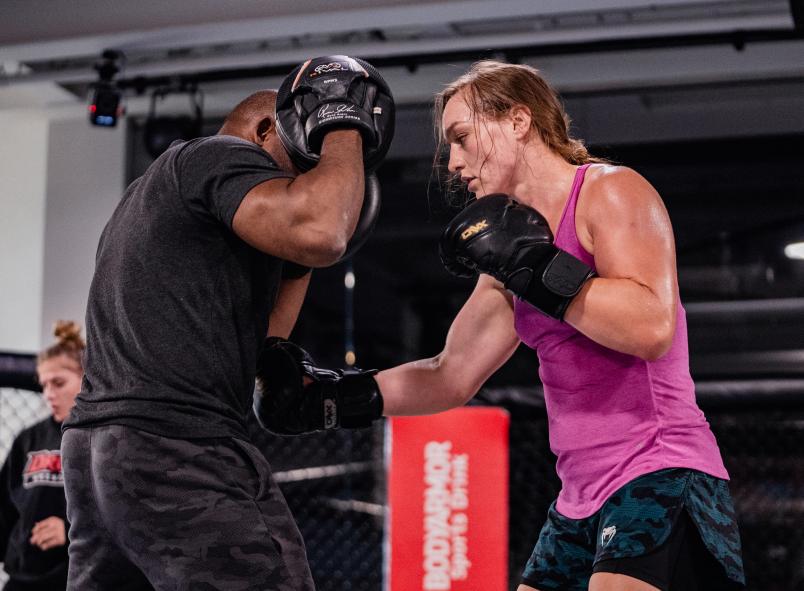 It’s a matchup that not only made sense for Ladd’s timetable, but also an enticing fight for her as a competitor due to Chiasson’s overall skill set.

“She is willing to engage everywhere – standing, clinch, ground,” she said. “So, I see it being a little bit of a brawl that can take place at anywhere on the spectrum as far as what we do in MMA, so I think it’ll be fun.”

Ladd expresses some indirect frustration about the fact that opponents she was booked against have moved on to bigger fights. It only takes a little bit of deductive reasoning to understand she is thinking about Julianna Pena and her upcoming title shot against Amanda Nunes at UFC 265. Ladd was scheduled to fight Pena in March 2020 before the COVID-19 pandemic scratched that event, but she understands the only thing she can control is her work toward earning her own shot at the belt.

Although she sees the title as “up for grabs,” Ladd also admits it’s “very hard” to bet against the double-champ. She’s not too caught up in all of that right now, though, especially with the bright lights of the Octagon at the end of the proverbial tunnel – the completion of her long road back to what she loves to do.

“When I have a fight, I see that as end of the road, end of the world,” Ladd said. “There’s nothing beyond that, so I l legitimately have not thought past that night.”