UFC debutant Modestas Bukauskas could very well have the vaunted "it" factor, and he plans to show it in his debut.
By Thomas Gerbasi, on Twitter @tgerbasi • Jul. 14, 2020

Hours away from his first walk to the Octagon to face fellow newcomer Andreas Michailidis, Modestas Bukauskas doesn’t foresee any first-time UFC jitters getting in the way of his fun on fight night.

“I don't feel like I'm gonna be nervous,” said the 26-year-old. “For me, this is enjoyment. This is excitement, this is me embracing another pressure-filled, some would say scary, situation. This is the natural next progression I've been working towards my whole life and now I finally get to show to the whole world what I'm made of.”

The confidence is well placed, given a 10-2 record that includes nine finishes, a Cage Warriors light heavyweight title and a six-fight winning streak. But in following the Lithuania native’s career and hearing his story, there is the distinct sense that there is more in store for “The Baltic Gladiator” should he continue his run of success in the sport’s biggest promotion.

He’s got that “it” factor, the intangibles that put fighters in different tax brackets sooner rather than later. But the thing is, it can’t be manufactured. A fighter either has it or he doesn’t. Bukauskas looks to have it, but all the personality in the world doesn’t matter if he can’t perform on the big stage and he knows it. So his focus is on the fighting, and if you want to come on board for the rest, he welcomes it. 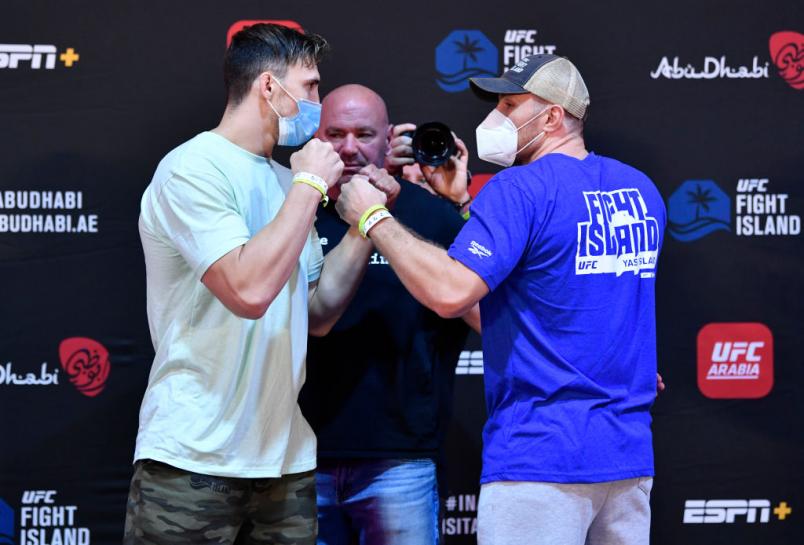 “I have to admit, for most of my life I've always been the guy who's sort of been pushed to the side or not been the popular kid,” he said. “And before it used to be such a big thing. I want to be the popular guy; I want to be the most liked guy. Now I don't care. I've got to go for what's mine and that's it. To some people I might be a bit like marmite - you either hate or love it - but I just try to be who I am. You've got to be your own character; you can't be no one else.”

He gets to show who he is on Fight Island shortly, and it’s been quite the wait for Bukauskas, who signed with the UFC in January and had a fight against Vinicius Moreira booked for May before the COVID-19 pandemic hit. That put everything on hold for everyone.

“I really wanted to make an American debut, so obviously it was a little bit disappointing that this whole situation happened but, at the end of the day, I'm always trying to look at the positives, I'm always looking at what things I can take from it that are still gonna help me improve, not just as an athlete but as a person as well.”

That meant brushing up on his Lithuanian, which had gone rusty since he and his family moved to London when he was three years old, and he even found a girlfriend during the pandemic, and that’s got to be a pretty rare feat in and of itself. Yeah, he trained too, which was a no brainer considering that his head coach (and father) Gintas was in the room right next to him with a gym in the same house.

Guess there’s no calling in sick for training in the Bukauskas household?

MORE FROM FIGHT ISLAND: Fight by Fight Preview | Fighters On The Rise | Ige Outworks The Competition | Benoit Feels At Home | Kattar Knew His Chance Would Come

“We've actually got a very good relationship,” he said. “The only time it really gets annoying is when there's loads of exercises in strength and conditioning that you don't want to do and he makes you do it. You just have to power through because if you say no to your head coach, you're probably going to get a cane to the bum or something. (Laughs) But we're best friends. And a big thanks to my stepmom as well because she's been a massive inspiration and help for all of us. As a family, we've reconnected even more during this time.”

And now all directions point to Fight Island, and as personable as Bukauskas is, when he gets locked in with Michailidis, it’s all business.

“I learned a hell of a lot from my two losses, but I think mentally, the place where I really learned the most in terms of my development as a person and as a fighter is that I've learned to let out a bit more of an aggressive, vicious side of me as opposed to this sweet sort of sportsmanlike character, which I used to sort of present when I'm fighting,” he said. “Now I'm bringing that mean side out way, way more. You know the guy wants to hurt you and he wants to take what you've got, so you gotta give it to them, otherwise they're gonna do the same back to you. As brutal as it is when we're in there, after we pay each other respect. But when we're in there, it's go time and I'm ready to go out and put it on him.”

“When you're under these bright lights, how could you not be excited?”