Given the vast amounts of evidence we have from stick and ball sports that it can take years for an athlete to find the right team, the right system and the right coaches to finally help them unlock their full potential, it’s a wonder we don’t view combat sports athletes through that same lens with greater frequency.

More often than naught, we see a competitor struggle to find consistency or never quite put everything together the way most people expected and write them off, either conceding that they were never as good as anticipated, or that they didn’t have what it takes to make all the pieces fit together correctly and become an elite competitor.

Ryan Benoit has been a professional fighter for a dozen years, making his debut on May 9, 2009 at the tender age of 19. He suffered his first career defeat in his third appearance, rattled off four straight victories to reach 6-1 and hasn’t earned the same result in back-to-back fights ever since.

For the last seven-plus years, the now 30-year-old flyweight, who takes on former title challenger Tim Elliott on Wednesday night on Fight Island, has alternated wins and losses while battling myriad injuries that have limited him to just nine appearances during that span.

Last December, he ended a two-year absence with a split decision loss to AlatengHeili in Busan, South Korea which dropped him one fight below .500 in the UFC and his professional record to 10-6 overall. Despite the unsatisfying verdict, it was a moment of excitement for the star-crossed talent from Texas.

“For a little while there, I was looking for another job, seeing what I could do to make money in the meantime,” admitted Benoit, who has experienced momentary flashes of potential, like when he stopped Sergio Pettis in the second round at UFC 185 to register his first UFC victory. “It was a scary feeling because it’s like, ‘Damn — is this really what I’m going to have to do to try and make money?’

“So it was good to be back in the cage, be back to fighting,” he added. “It was nice to be me again.”

Even nicer still was that he came away from the fight largely unscathed.

“That felt good,” he said with a laugh. “I didn’t break a hand, I didn’t come out with any major injuries or anything like that, so that was a relief.”

That’s another one of those pieces we don’t necessarily think about as much as we should when it comes to mixed martial arts, despite the fact that we have years of understanding built from watching elite athletes struggle to get back into a groove after spending time on the injured list in football, baseball, basketball, and hockey. 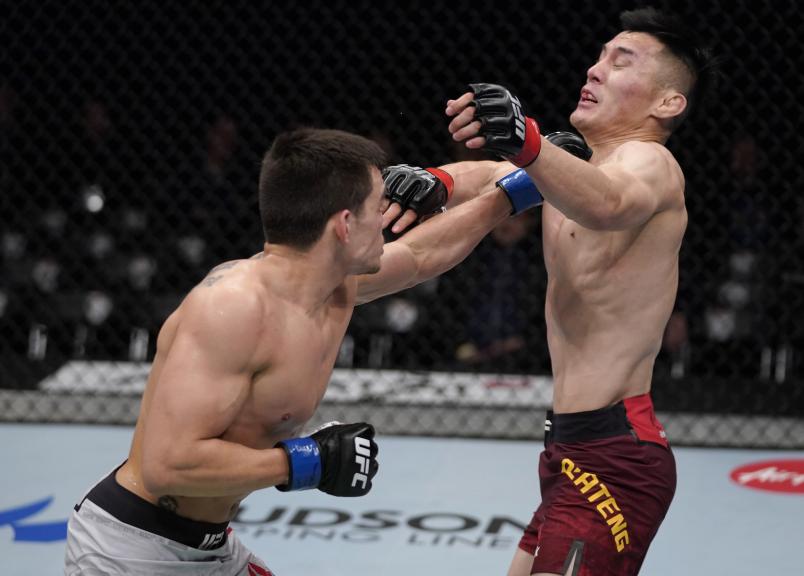 When an NBA All-Star rolls an ankle and is forced to spend six-to-eight weeks on the sidelines, everyone understands and expects that those first several games back are going to be an adjustment period — their conditioning won’t be where it usually is, their timing within the offense will need to be recalibrated, and their jump shot won’t be as wet as everyone is used to it being.

So why doesn’t that transfer over when we think about mixed martial artists who often aren’t surrounded by the same army of coaches and therapists whose job is to get Chris Paul back on the court and into a rhythm?

Why doesn’t that transfer over when we think about mixed martial artists who suffer broken hands, torn muscles, or any of the myriad injuries and ailments that these men and women accumulate by stepping into the cage?

“The time off and the injuries have contributed to why it’s been such a rollercoaster, why I’ve had such a win-loss, win-loss, win-loss since 2012,” said Benoit, who suffered a broken hand and broken foot in his November 2017 win over Ashkan Mokhtarian, then dealt with a broken rib in advance of a scheduled bout with Roberto Sanchez at UFC 228 in Dallas. “It’s never an easy process to get in as tip-top shape as possible, be in the best shape of my life, and then get injured.

“It sucks having to start over all the time,” he added. “It’s never been an easy process. It’s hard on my family because they’ve got to go through all this with me.”

In addition to constantly struggling with injuries, the aptly nicknamed “Baby Face” has also come to recognize that like so many athletes who only flourish following a change of scenery, he spent the first decade of his career with the wrong team.

A wrestler in high school and all-around tough kid, Benoit got his start in combat sports training under Saekson Janjira at his Muay Thai gym in Plano, Texas. Like many competitors, he’d shuttle between gyms in order to get the training he needed — driving to one spot to work on his boxing, and another to train jiu jitsu.

He was progressing in each of the individual disciplines, but when it came time to spar and put it all together, there was a disconnect.

“I could spar each sport individually, but when I would get into an MMA fight or MMA sparring at a high level, I got caught up doing a boxing match or a kickboxing match or trying to make the fight something different than it was,” he said, reflecting on the understanding he’s unearthed since switching teams. “It’s a learning process and the only way to figure it out is you have to learn.

“You have to learn what you’re going to do between camps when you have a torn biceps or if you have surgery on your hand,” he continued. “It’s a constant gut-check and it’s a lot of maturing.”

And then it all clicked.

Like a veteran player being unlocked and finally reaching their full potential under the guidance of a new coaching staff that maximizes their strengths and gives them all the tools they need to succeed, Benoit finally feels like he’s in the right position to eschew his pattern of alternating results and string together the kind of performances that show his full potential.

“I’ve bounced around to a few camps, been a bit of a journeyman, and training with Team Renzo Gracie, I feel like I’m finally where I need to be,” said Benoit, who has been working on his striking with Jamie Crowder, and sharpening his jiu-jitsu under the watchful eye of Professor John Danaher and one of his top students, multiple-time World No Gi jiu jitsu medalist and unbeaten MMA prospect Garry Tonon.

“This is where Georges St-Pierre did a lot of his camps and so many greats before me have spent a lot of time out here. I was lucky enough to have a relationship with some of the coaches out here and they invited me out, so this has been my home.

More than a dozen years after making his professional debut, Benoit heads into this week’s fight with Elliott feeling like he’s fully prepared and backed by a truly professional crew for the very first time.

And after years of struggling to stay healthy and the complete and utter chaos dropped upon the world in the opening half of 2020, the chance to venture to Fight Island and do what he loves has him bursting at the seams with anticipation.

“I tell you what — it’s going to be a breath of fresh air,” he said of competing this week. “I’m just happy to be here.

“I feel like those previous battles that I’ve had to go through and issues that I’ve had to deal with have really helped me with this,” he added, reflecting on the long, winding path that has carried him to this point. “I can’t explain how relieving it is to be fighting now and be in a camp now and feel like I’m a professional.

“It feels great to be fighting again. It’s been a long journey and I’m happy, man.”

And maybe now, after all those frustrations and disappointments, the flashes of potential and inconsistent results, Ryan Benoit has finally landed with the right team, the right coaches, in the right system to help him become the world-class competitor he always envisioned himself being.