Fighters On The Rise: July 15 Edition

Take a closer look at three fighters poised to emerge ahead of their bouts on July 15's Fight Night
By E. Spencer Kyte, on Twitter @SpencerKyte • Jul. 12, 2020

The second of four UFC events to take place on Fight Island hits mid-week with a lineup laced with emerging talent and headlined by a tremendous featherweight matchup between Calvin Kattar and Dan Ige.

It gets said a lot around these parts, but this is another one of those cards where casual fans might not know a lot of the names set to hit the Octagon, but the depth of talent on this card is extremely high and the event has a serious “you’re not going to want to miss this” vibe, given how many consistently entertaining competitors and high upside talents are set to compete.

This is the July 15 edition of On the Rise. 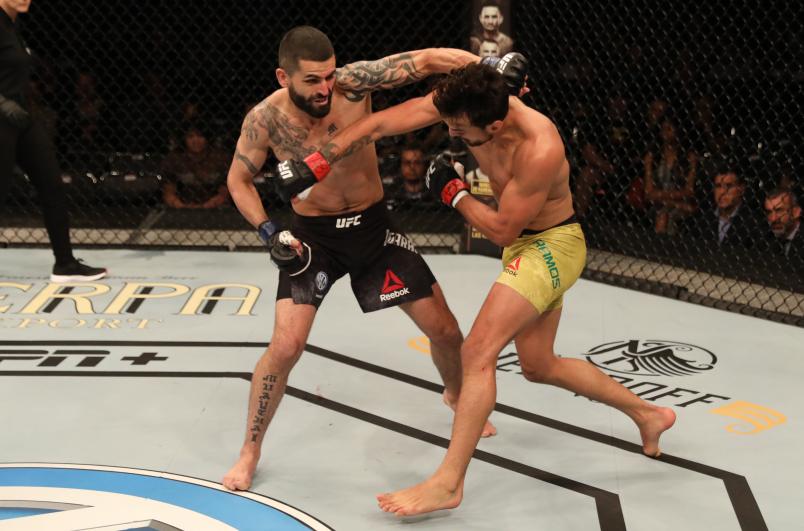 There was a lot of buzz surrounding Ramos when he arrived in the UFC as a 21-year-old bantamweight with a 9-1 record, fresh off a second-round submission win over Alfred Khashakyan, who Contender Series fans will remember as the guy “Sugar” Sean O’Malley pieced up on his way to a contract a year later.

The Brazilian raced out of the gates with three straight victories, including a vicious spinning back elbow knockout of Aiemann Zahabi at UFC 217 in New York City that earned him a Performance of the Night bonus. His run of success was halted at the start of last year by Said Nurmagomedov, but Ramos quickly rebounded with a unanimous decision victory over Journey Newson in June, which turned out to be his final appearance in the 135-pound weight class.

Ramos made the decision to move up to featherweight following his spring victory in Minnesota, and looked outstanding in his maiden voyage in the 145-pound waters of the UFC, submitting Eduardo Garagorri in the first round of their clash in Sao Paulo in mid-November. This week, the 24-year-old makes his sophomore appearance in the UFC featherweight ranks in a clash with unbeaten Brit Lerone Murphy.

Murphy impressed in his promotional debut against Zubaira Tukhugov, battling his experienced foe to a draw at UFC 242, which just so happened to take place on Yas Island. The 28-year-old handled the step up in competition well and showed no signs of nerves in his first UFC appearance, and will serve as another quality test for Ramos as he looks to forge a path for himself in the featherweight division.

The depth of talent in the 145-pound weight class is greater than it is at bantamweight, though not by that much anymore, and Ramos has some work to do before he can establish himself as a factor in his new surrounds. But the promise that he carried with him throughout his first three years on the roster remains and he has both the size and skill set to develop into another impressive emerging talent to watch in the not too distant future.

If you’re looking for the next possible breakout star from the United Kingdom, one need not look any further than Shore.

The undefeated 25-year-old from Wales fought a tough slate on the regional circuit, climbing the ranks in Cage Warriors, winning and successfully defending the bantamweight title before signing with the UFC and scoring a third-round submission win over Nohelin Hernandez in his promotional debut. A pro since 2016, Shore is 12-0 with 11 finishes, with former UFC fighter Vaughan Lee standing as the only man to make it to the scorecards against him.

What really makes “Tank” stand out as a prospect, however, is that in addition to racking up a dozen victories in as many pro appearances, he did the exact same thing as an amateur as well, wrapping his amateur run with four wins in three days at the 2015 IMMAF European Open Championships.

He has literally never tasted defeat in MMA competition and while that may end one day, Shore profiles as the kind of fighter who could very well maintain his unblemished record for a while longer.

This week, the UFC sophomore welcomes Aaron Phillips back to the Octagon. The 30-year-old Louisiana native went 0-2 in a pair of 2014 appearances inside the UFC cage, dropped his first fight back on the regional circuit to current UFC fighter Chris Gutierrez, but has rattled off five straight victories since to earn a return call to the biggest stage in the sport.

Phillips is the kind of experienced, powerful veteran the young Welshman needs to be testing himself against at this stage of his development, and their clash this week on Yas Island should provide further clarity on where Shore fits in the suddenly loaded bantamweight ranks. 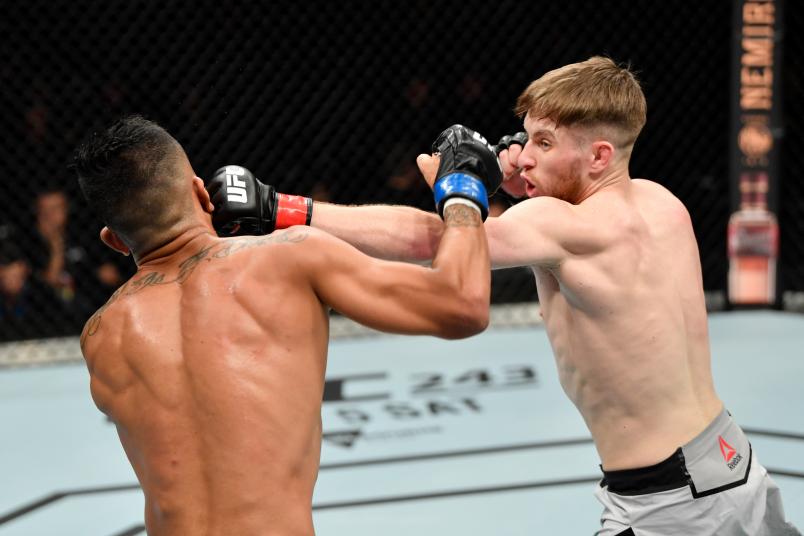 Flyweight champ Valentina Shevchenko has been turning back challengers at such an impressive clip that there is a greater need to find potential new contenders in the 125-pound ranks than there is in any other weight class. One competitor who thus far hasn’t gotten enough mention as someone to watch is England’s Molly McCann.

The 30-year-old from Liverpool dropped her UFC debut to Gillian Robertson a little over two years ago but has since earned a trio of unanimous decision victories to force her way into the Top 15. She has won nine of her last 10 outings, including a second-round stoppage win over Bryony Tyrell to claim the Cage Warriors flyweight title in her final bout before graduating to the UFC, and she looks to make it four straight this week when she squares off with Taila Santos this week on Fight Island.

McCann is a hard-nosed, tenacious grinder who has made consistent improvements in each of her four UFC appearances, as evidenced by her results. After losing to Robertson, she edged out Priscila Cachoeira with scores of 29-28 across the board, following that up with a 30-27 sweep of Ariane Lipski, and capped by a collection of 30-26 tallies in her victory over Diana Belbita last October in Boston.

Not only does that upward trajectory bode well for her showdown with Santos this week in Abu Dhabi, but it further underscores her potential in the flyweight division, where very little separates the competitors stationed in the lower half of the rankings. All have shown flashes of potential at different points, yet no one has been able to really break through, creating an opportunity for “Meatball” to take a considerable step up the standings with a fourth straight victory.

Santos arrived in the UFC with a perfect 15-0 record but dropped a split decision to Mara Romero Borella in her promotional debut in February 2019. If McCann can continue her impressive streak of turning in a more dominant performance each time out, she could very well pick up her first UFC finish and establish herself as a potential future contender to track in the highly competitive flyweight division.