"Destiny" Brought Correia Back To Brazil & To Face Aldana

“I believe everything happens for a reason and has a moment to happen, so destiny made it so I could face Irene again."
By Damon Martin • May. 10, 2019

It’s been a tough couple of years for former women’s bantamweight title contender Bethe Correia following a knockout loss in her last fight.

After a three-round war against Marion Reneau and suffering the KO to former champion Holly Holm, Correia was due for some time off but not nearly as much as she received.

The 35-year old Brazilian was originally scheduled to return in Jan. 2018 against Irene Aldana but she was ultimately forced out of her contest due to an eye problem that required her to undergo surgery.

Seven months later, Correia was once again booked for a showdown against Aldana, this time at UFC 227 in California. That’s when the bottom really fell out from under her after Correia wasn’t cleared to compete just days before the fight was scheduled to take place.

Once again her eyes were at the root of the problem and it was particularly frustrating because Correia thought she had done everything necessary to correct the prior issue she was facing.

In fact, at no point was Correia ever in danger of never being able to compete again because of an eye injury — she just nearly lost faith when she did everything possible to come back and yet the rug was pulled out from under her.

“I was pretty confident I would be back,” Correia said ahead of her return at UFC 237. “My doctors left it up to me if I would go back or not because they healed me. To me, the worst moment was getting my fight cancelled in California three days ahead [of the event]. That was the moment that made me really think about quitting and just made me really fall apart. That was the toughest.”

Like any injury, Correia knew she had to take the time to allow her eyes to heal following surgery but she thought everything had been solved when she arrived to fight at UFC 227.

According to Correia, the hardest part about that week spent in California was already putting in the time and effort to go through a training camp in preparation to compete and then she was told just three days out from the event that she wouldn’t be allowed to fight. 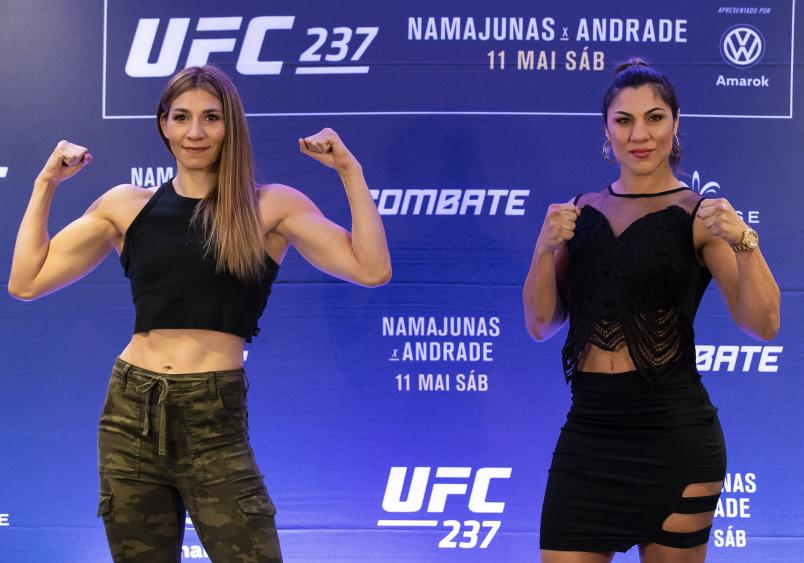 “I was prepared to fight. That weighed a lot on me,” Correia said. “I believe everything happens for a reason and has a moment to happen, so destiny made it so I could face Irene again and the possibility of facing her again so now the time is right and that made me even more motivated to come in and give a great performance. This has been my best camp because I have been so motivated to get back.

“I think it showed how strong I am and how much I’m a warrior. Fighting is not for everyone and I showed that I could persist and be great.”

After two failed attempts at making this fight happen, Correia is once again just a day away from facing Aldana, who comes into the contest off back-to-back wins including a Fight of the Night performance in her last outing this past September.

While Correia would have gladly faced whoever was put in front of her, she was particularly happy to take on Aldana after spending the better part of two past training camps getting ready for this specific opponent.

“It’s actually the third time that the UFC put together this fight. The first two times I had some health issues but the third time’s the charm,” Correia said. “I have studied Irene and watched her fights many times and I feel completely prepared. I think there’s no way this fight isn’t happening. Everything is perfect and I’m ready

“I’m just really happy to be back. My time off felt like wars to me. My last fight was complicated so it was good for me to go back and this camp has been amazing and complete. I’m really excited to be back and give my best for the audience.”

Styles make fights and Correia knows that Aldana is a tailor-made opponent to put on a compelling matchup for the fans witnessing UFC 237 this weekend.

Correia has built her own reputation on a high intensity, volume striking output and that is exactly the kind of fight she expects from Aldana in return. 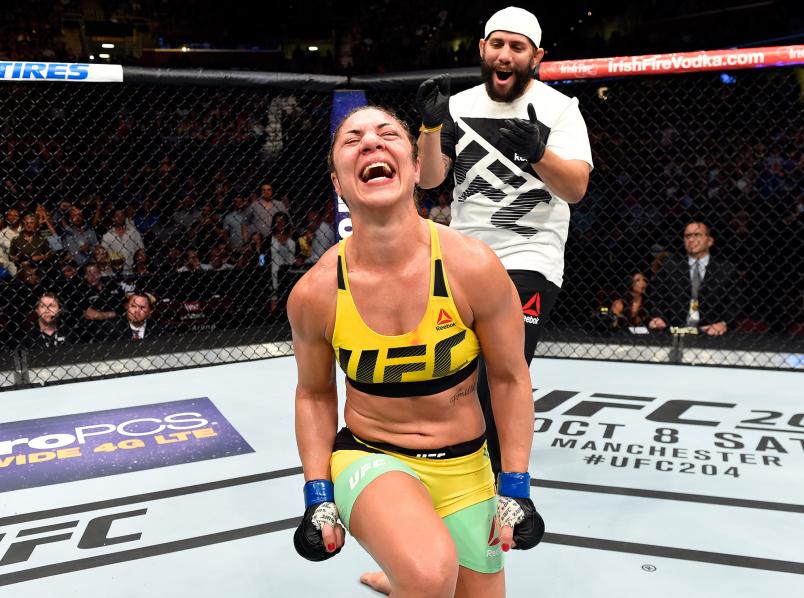 Bethe Correia of Brazil celebrates after defeating Jessica Eye in their women's bantamweight bout during the UFC 203 event at Quicken Loans Arena on September 10, 2016 in Cleveland, Ohio. (Photo by Josh Hedges/Zuffa LLC)

Bethe Correia of Brazil celebrates after defeating Jessica Eye in their women's bantamweight bout during the UFC 203 event at Quicken Loans Arena on September 10, 2016 in Cleveland, Ohio. (Photo by Josh Hedges/Zuffa LLC)

“I’m really excited,” Correia said. “First because Aldana is from Mexico and I love Mexico. I hope one day I can visit there and I have a lot of fans over there so I’m really excited for that. I know we will put on a show. It’s definitely going to be a great fight for the fans.”

Because she was forced to the sidelines for an extended period of time, Correia definitely appreciates the fact that she’s finally back doing what she loves to do the most.

If there was an added bonus to this particular fight it’s that Correia gets to compete in front of a home audience in Brazil.

It’s been nearly six years since Correia was able to secure a victory in her native country and nothing would be sweeter than making her return after almost two years away and then getting a win in Brazil.

“It’s perfect,” Correia stated. “When I heard there would be an event in Brazil, I was thinking about challenging someone so I could get a fight but then I got the invitation from the UFC. I had just gotten back into training so it was perfect.

“The perfect timing and the perfect place to mark my return to the Octagon.”

(Ed. Note – Correia failed to make weight for Saturday’s bout, coming in at 141 pounds. Correia will be fined and the fight with Aldana will proceed as scheduled.)