Penn Still Fighting For Love Of The Game

“I love it so much. I love the process. I love the whole thing. Of course, people are always going to ask me why are you doing this? Of course, in my head, it’s always, ‘your lack of faith disturbs me,’ but I really do love it."
By Damon Martin • May. 9, 2019

BJ Penn gets asked a lot of questions but the one that probably comes up more often than any other is why is he still fighting?

Already a UFC Hall of Famer and a former two-division world champion, the 40-year old Hawaiian has put together the kind of resume that future stars will dream about when starting their own mixed martial arts careers.

As it turns out, Penn’s answer to that constant inquiry isn’t all that nuanced or layered in a lot of hyperbole because it all really boils down to one factor:

“I love it so much,” Penn said ahead of his return at UFC 237 in Brazil. “I love the process. I love the whole thing. Of course, people are always going to ask me why are you doing this? Of course, in my head, it’s always, ‘your lack of faith disturbs me,’ but I really do love it.

“I love the process. I love going through the whole thing. I mean fight week, all the nerves, all the anxiousness, all the good feelings, all the bad feelings, you can’t feel it any other way. It’s what I do.”

Penn has been a lifelong martial arts enthusiast who will always love learning new tricks and techniques when he’s in the gym.

As hard as the preparation for a fight might be, Penn thrives on the camaraderie that comes along with his training camps and the lifelong friendships he’s built with teammates and coaches over the years. 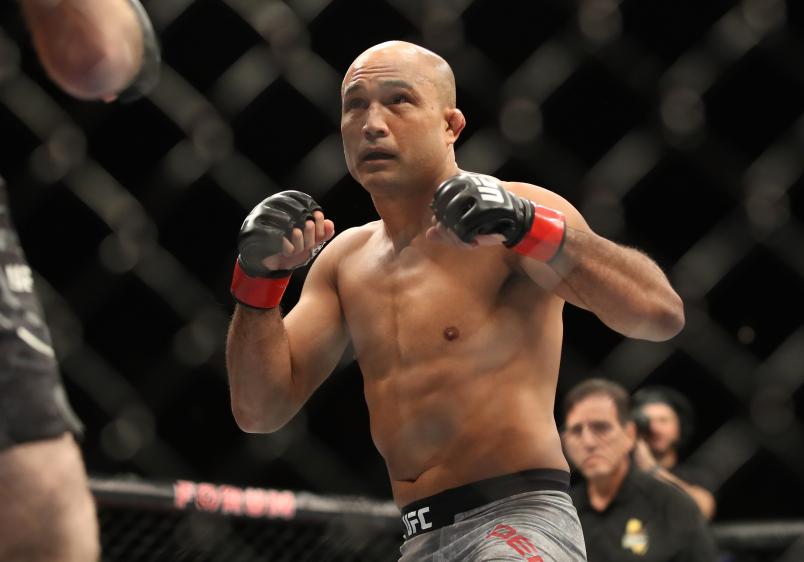 INGLEWOOD, CA - DECEMBER 29: BJ Penn battles Ryan Hall in their lightweight bout during the UFC 232 event inside The Forum on December 29, 2018 in Inglewood, California. (Photo by Christian Petersen/Zuffa LLC/Zuffa LLC via Getty Images)

INGLEWOOD, CA - DECEMBER 29: BJ Penn battles Ryan Hall in their lightweight bout during the UFC 232 event inside The Forum on December 29, 2018 in Inglewood, California. (Photo by Christian Petersen/Zuffa LLC/Zuffa LLC via Getty Images)

Outside the Octagon, Penn has enjoyed plenty of thrill-seeking activities that spike his adrenaline and get the blood pulsating through his veins.

He’s loved all of that, but still, nothing he’s ever done or ever will do equates the feeling that Penn gets when he steps in to do battle with an opponent in front of millions of people from around the world.

Because he knows that he can’t fight forever, Penn has truly come to appreciate everything that he’s done in the sport of mixed martial arts so he never takes any of it for granted.

Then again, Penn admits sometimes he has to fight against his own instincts because in his head he knows he’s still capable of being that same 20-year old savage who tore through the competition when he first arrived in the UFC back in 2001.

“I definitely appreciate it and I do think about it a lot,” Penn said. “But there is some side of me that’s always pushing me to be that younger kid again and not thinking about those things. I keep a glass is half-full kind of thing so I’m constantly fighting with those two people.

“The person that I have to be to become a world champ and then the other side, I can’t help but look back and enjoy the entire ride that I’ve been on and I’ve enjoyed the whole thing.”

His next fight takes place this weekend at UFC 237, where he faces fellow veteran Clay Guida on the preliminary card.

As much as Penn respects Guida as an opponent, the person standing across from him for this fight was far less important than the location.

“The opportunity to fight in Brazil, I couldn’t turn it down, especially in Rio de Janeiro, Brazil,” Penn said. “I could not turn that down and I made it happen. We’re here. We trained hard, we prepared and got ready and I’m ready.” 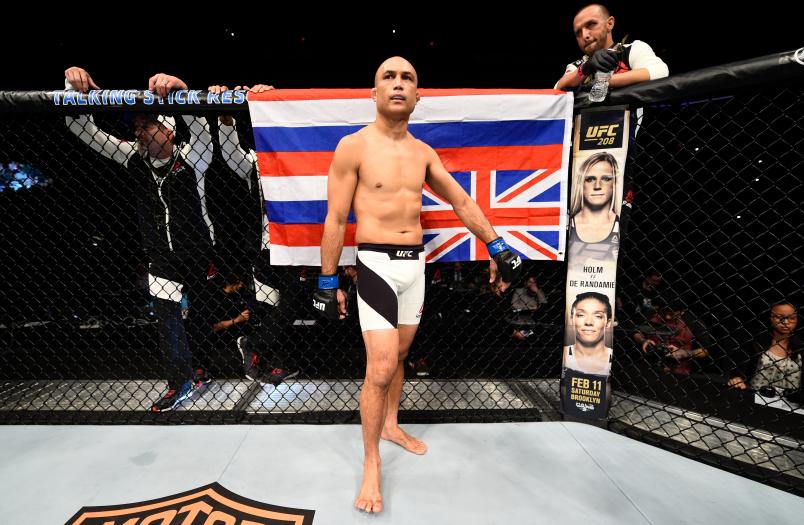 Penn brought in a regular cast of characters to help him prepare for the fight. He trained under coach Jason Parillo and spent time sparring with former opponent Diego Sanchez as well. Penn received additional help from the Nova Uniao team based out of Brazil when they sent some coaches to help the former two-division champion prepare for the battle ahead.

There have definitely been times in Penn’s career where he’s admitted to getting by purely on talent more so than hard work but that dynamic has changed dramatically in recent years.
Penn now knows the only way he’s going to return to the win column on Saturday night is by outworking the other guy for three rounds if necessary.

“I respect Clay a lot. Clay has been around the game forever. It’s a perfect time and a perfect opponent for Rio,” Penn said. “Clay’s a guy that’s always coming in good shape and I was nervous all these five, six or seven weeks getting ready for the fight. I know it’s a good task, but in that sense it made me train harder.”

There are a lot of commonalities when it comes to why fighters decide to pursue mixed martial arts as a career.

Sometimes it’s about money. Other times it’s just about winning championships and leaving a legacy behind.

Penn accomplished both of those goals more than a decade ago, so what is the biggest driving factor for him going into the fight with Guida?

“My motivation, in my head, I always believe in myself and I always believe that I will come back,” Penn said. “That comeback is always in my head. The other side is Rio de Janeiro. I have to get it done. We have to fight in South America at least one time.

“Saturday night, winning by rear naked choke would be very, very nice. To do it in the home of jiu-jitsu would mean a lot.”