Trinaldo: "I Live To Fight"

Randy Couture started all this. Back when “The Natural” was doing his thing, being heroic for the over-40 crowd as he won titles at heavyweight and light heavyweight, there was the assumption that in mixed martial arts, fighters could peak late and have more success than their counterparts in boxing.

Well, in the post-Couture years, some past 40 had success, but it was far from a regular thing, showing that maybe the UFC Hall of Famer was simply a unicorn.

Then again, look at Saturday’s UFC 237 card, where four fighters 40 or older – BJ Penn, Anderson Silva, Rogerio Nogueira, Francisco Trinaldo - will compete in Rio de Janeiro. And maybe the one who is the most successful at the moment is Mr. Trinaldo, 40 years young, and feeling better than ever.

“In my case, I still feel like a boy,” said Trinaldo, who faces Diego Ferreira this weekend. “I have no injuries, I’m in perfect health. God is very good to me.” 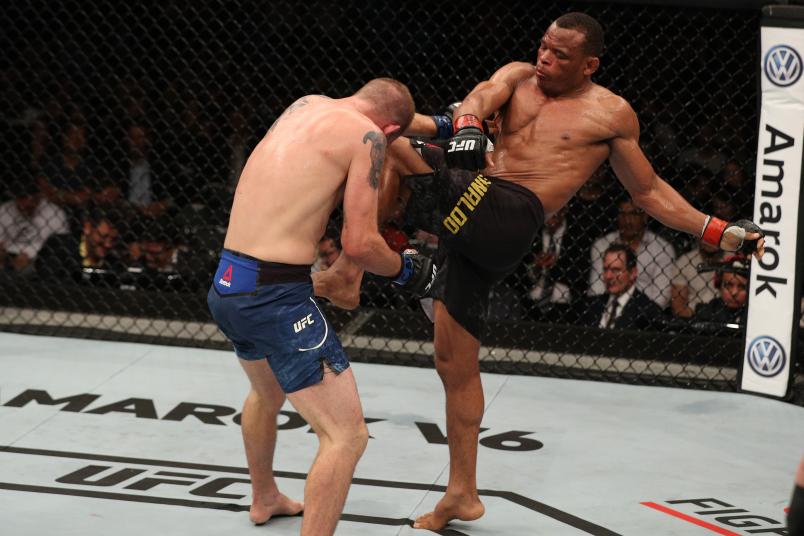 SAO PAULO, BRAZIL - SEPTEMBER 22: (R-L) Francisco Trinaldo of Brazil lands a knee to the body of Evan Dunham in their lightweight bout during the UFC Fight Night event at Ibirapuera Gymnasium on September 22, 2018 in Sao Paulo, Brazil. (Photo by Buda Mendes/Zuffa LLC/Zuffa LLC via Getty Images)

SAO PAULO, BRAZIL - SEPTEMBER 22: (R-L) Francisco Trinaldo of Brazil lands a knee to the body of Evan Dunham in their lightweight bout during the UFC Fight Night event at Ibirapuera Gymnasium on September 22, 2018 in Sao Paulo, Brazil. (Photo by Buda Mend

It’s been quite the run for “Massaranduba,” who hit the big 4-0 last December. Since debuting in the Octagon at UFC 147 in 2012, Trinaldo has gone 13-5, beating the likes of Chad Laprise, Ross Pearson, Yancy Medeiros, Paul Felder and Jim Miller along the way. In his most recent bout last September, he halted Evan Dunham in the second round. So what’s the secret to his mid-life surge?

“I think the secret is my lifestyle,” Trinaldo said. “I eat well, I do not drink alcohol and I live to fight.”

He also fights to live, as he battled his way up from rough beginnings to become not just a professional athlete, but one competing at a high-level in arguably the toughest division in the UFC. And to think, he’s approaching his seventh anniversary as a UFC fighter this June.

“How fast,” said Trinaldo. “One day I was struggling to get a chance at the UFC. It's like a dream.”

It was a dream that started late for him, as he didn’t start training until the age of 23, and that was in kickboxing. Eventually having “far too many rules” in kickboxing prompted a move to MMA, and he turned pro in 2006. Thirteen years later, he’s a UFC mainstay at 155 pounds, and that experience is a big key to his longevity and success.

“My experience helps me mainly to stay calm; this is the most important thing,” he said. “But I'm always learning new things. Anyone who thinks they've seen everything is screwed.”

And beyond winning and keeping his spot on the roster, Trinaldo is like every other fighter in the promotion when it comes to the idea of putting a world title belt around his waist.

“I always want to make exciting fights, and if the title appears in front of me, great.”

If it doesn’t, Trinaldo won’t stop. He’s a fighter. A UFC fighter. And nothing means more to him.

“I'm the most grateful person in the world,” he said of being in the UFC, “Because it changed my life and my family’s life, too.”