Andre Fili Eyes The Top Of The Pyramid

Lounging on a bed in the UFC’s host hotel in Las Vegas, Andre Fili is talking about falling in love with fighting again.

It’s a familiar trope you hear all the time from fighters who have been in the game for a minute, but as he smiles, laughs and cracks jokes in the middle of his weight cut, it’s evident he means it. 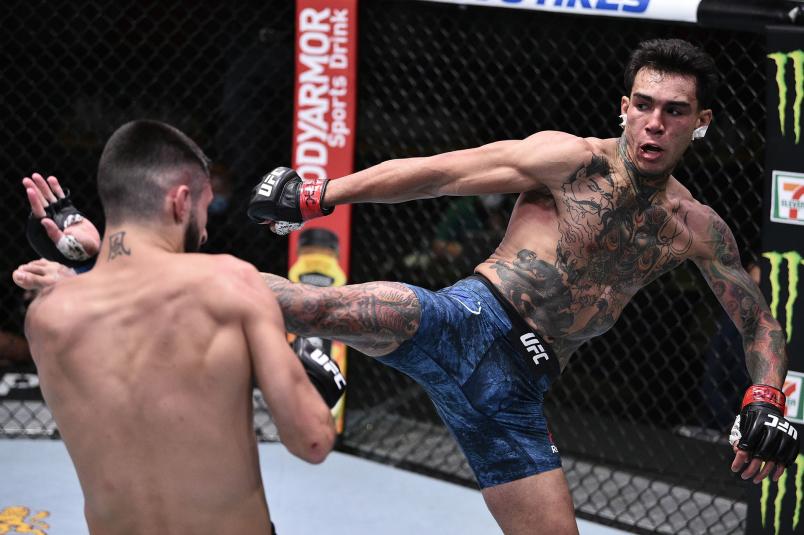 Leaving the judges is out of it is something Fili is particularly keen on. Eight of his last nine have gone to the scorecards, and while the results usually went his way, the splits were always disturbing, regardless of which side he landed on.

The fight with Michael Johnson I don’t think was that close. I think I won that fight pretty plainly. The fight with Sodiq (Yusuff)? That was a close fight. I still think I won. He’s incredible; that guy can fight his ass off. I got nothing but respect for that dude. I think I won, but it was a really close fight. My last fight, I don’t think was even close to a split. I think I won most every moment of that fight. So I took a step back, and it’s like, yeah, there are three judges who have never been in a fight and their opinion can’t dictate how I feel. When I look at my record, I’m on a six-fight run and I should be excited about that. That should make me happy. I’m not going to let these dudes who have never been in a fight decide how I should feel about my performance.”

It’s a testament to how fast time flies when you realize that Fili turned just 30 this past June, mere days after his win over Canadian phenom Charles Jourdain. That victory marked his 15th UFC fight since his promotional debut in 2013, a stretch that, whether he won or lost, filled his résumé with names like Gabriel Benitez, Max Holloway, Dennis Bermudez, Yair Rodriguez, Artem Lobov, Clavin Kattar and Hacran Dias.

It’s not a stretch to say that Fili has fought in two distinct eras, not only of the UFC, but of the sport, in general.

“I feel like I have grown up in the UFC. You guys have seen my highest highs and my lowest lows, back to getting high highs again. You’ve seen me go up-down-up. I love this company, I love this sport and watching this weight class evolve. I think it’s wide open right now, and I’m excited for my turn to get that belt.”

Regardless of the era, Fili has never shied away from the brightest talent the featherweight division has had to offer. The victory over Jourdain stunted the rise of the highly touted prospect, a storyline he’d like to repeat Saturday when he faces another rising sensation in Arkansas’s Mitchell. Undefeated in four UFC bouts, The  Ultimate Fighter alumnus has endeared himself to MMA fans with his disarming countrified persona and sinister ground game.

“It’s an interesting matchup. It’s going to be fun, I’m going to win and it’s going to be a beautiful weekend. I’m excited, man; grateful, excited and ready to put on a show.”

If there’s an extra satisfaction from knocking a rising, fan-favorite from his current spot in the 145-pound hierarchy, “Touchy” isn’t copping to it.

“It’s exciting, but I’m really focused on controlling what I can control. His record and his hype and all these other things, that has nothing to do with me. I’m here to beat him as a fighter. I have to win this fight. It’s my livelihood. I’m completely focused on myself, and it’s a beautiful thing.”

Focused on himself, certainly, but not taking Mitchell for granted. The Team Alpha Male veteran has been working with some of the best grappling coaches in the game to prepare for a bout that seems destined to end up, at least in part, on the mat.

After nearly eight years of cementing his residency in the division, Fili eyes this Saturday’s tilt as a catapult to beginning his title run. As he speaks, it’s clear his heart is already among this elite.

“I’m fighting the best guys in the world. I’ve never been in a boring fight,” he notes. “Featherweight has always been one of the most exciting weight classes and I don’t think that’s ever going to change. It’s arguably at its most exciting right now, and I’m ready to be in that top tier mix. I’m ready to be at the top of that pyramid. So when I get that definitive win, when I get that performance bonus win against my opponent, it’s going to put me right up in the talks of those big-money, title-contention fights.”