Maurice Greene: A Man With A Plan

Ask Maurice Greene how he’s enjoying his new digs in Albuquerque, and his response comes back before the question is finished.

“You know how cold it is in Minnesota?” said Greene. “I'm about to run with no shirt on. You tell me which one's better.”

“The Crochet Boss” laughs, but weather aside, he is more than settled with his family in New Mexico as he approaches his Saturday bout with Greg Hardy. It’s his second since he linked up with the Jackson-Wink MMA squad, and he already feels like this will be home for as long as he straps on the four-ounce gloves.

“It's the best gym in the world, especially for heavyweights right now,” he said. “You tell me what gym has six, seven heavyweights that are at a high level. We're not talking about new heavyweights, but true heavyweights. So I'm in a good place. It will serve me right for the years I got left in the sport. I'm trying to get in and out, get these belts and get out.”

As a man with a plan, one that he hopes will send him to the analyst’s booth when his fighting days are over, Greene is a dangerous man heading into a pivotal meeting with the former NFL star. He’s won four of his last six since coming off The Ultimate Fighter, including a third-round submission finish of Gian Villante in his most recent bout.

“I went out and executed a game plan,” he said of his June win over the New Yorker. “There were some opportunities where I could have been better. There's always that. But for the most part, I was pretty damn good until I got hit and dropped.”

Even then, Greene showed the evolution of his game as he withstood Villante’s ground strikes and secured the arm triangle choke that ended matters at the 3:44 mark. More notably, he showed that he could bounce back from adversity to win. It’s a situation Hardy hasn’t truly faced yet in his pro career.

“I can look you in the face and say when I get hit I'm gonna get back up to my feet,” said Greene. “I can say all that s**t and I can get hit and crumble. You really see where your fight or flight is and what your body is prepared to do. When it happened to me, one I didn't win (against Sergei Pavlovich in October 2019) and one I did win (Villante). But we fought. We were in tough positions. I know he (Hardy) played football in the NFL and all that stuff, but I'm curious to see what he's ready to do.”

What Hardy does is hit hard, and he’s also shown a willingness to face all comers, which he did when he stepped up to take on Alexander Volkov last November. He lost that fight, but he went three rounds with the Russian before rebounding with a victory over Yorgan De Castro in May. Needless to say, Hardy is a work in progress, one Greene respects. So much so that he believes that if their fight took place before, the outcome may have been different than what he expects it to be this weekend in Las Vegas.

“Everything's about timing in there,” said Greene. “Had I fought Greg Hardy earlier, it may have not went that well. But the timing's right for this fight. In the meantime, what you do is beat up other guys that are at your same level and then you come and you get the athletic bull. He's not a mixed martial artist; he's an athlete. He's capable of winning, he can win fights, he can win fights impressively, he can be dominant, he can be all that. But I'm a mixed martial artist. And me and Greg are gonna get down. We're gonna fight on Halloween, and I hope he's ready to go to hell, because I'm ready to go there.”

As for the outcome the 34-year-old Greene expects, there is only one he will accept. And his focus on the outcome means there will be no forecasts for 2021 from him. All that matters is Saturday night. 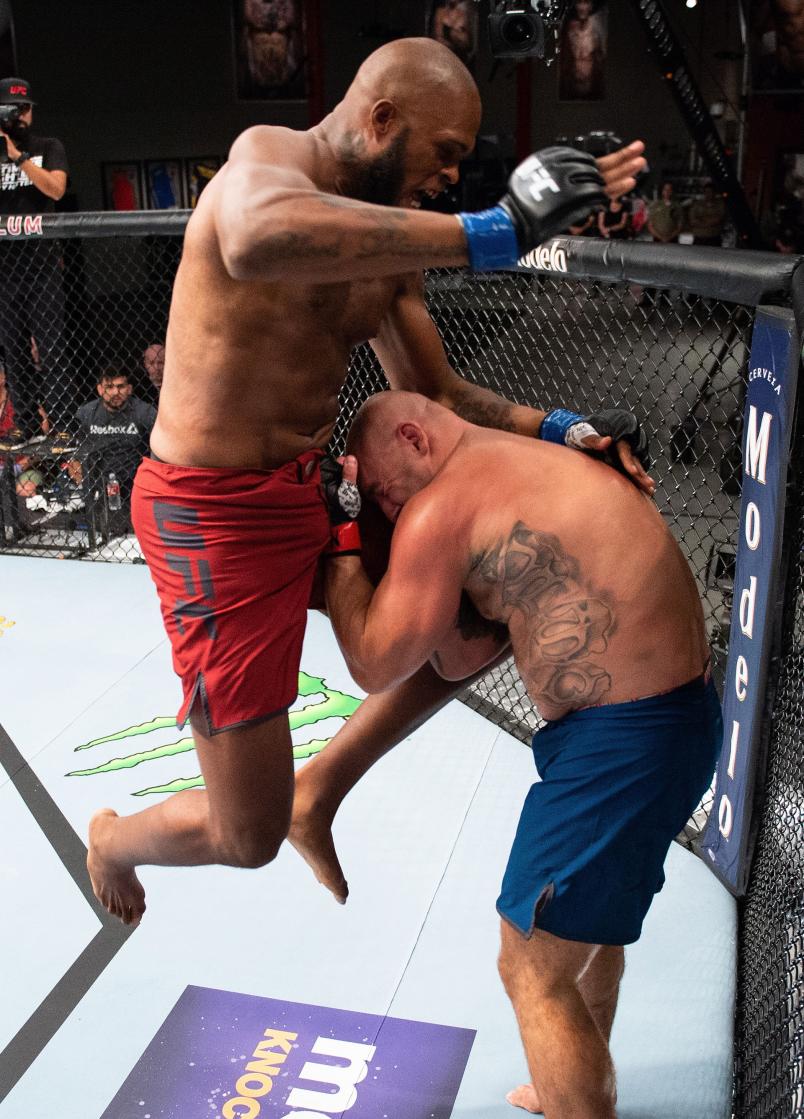 “There are a bunch of fights that I look at like that,” he admits. ‘I’d say, ‘Man, after I do this I'm about to get this money,’ and all that s**t doesn't matter. My dad told me, ‘None of that s**t matters unless you do one thing, Maurice, and that's get a W. F**k all that shit you're thinking about. You're losing focus of what's important. You want to do this as a career, you want to support your family, you need to get a W. That's all you need to worry about is winning. And all that other s**t will come.’”

Father knows best. Now it’s up to his son to deliver the goods.

“I'm gonna try to bring him to deep water and drown his ass,” said Greene.