Vince Morales Wants To Get To Work

Vince Morales' Confidence And Ability Continue To Elevate As He Gains Experience In The Octagon. The Next Step Is Getting His Hand Raised At UFC Fight Night: Font vs Aldo.
By THOMAS GERBASI, ON TWITTER @TGERBASI • Dec. 2, 2021

After buying a house with his lady, fellow fighter Shino VanHoose, Vince Morales doesn’t hesitate to reveal his feelings about Las Vegas.

“It's home now,” said the Idaho native who spent plenty of time in Oregon, as well. But it’s in the fight capital of the world where his worlds collided and brought him to a place where the only direction is up.

“A few years ago, it seemed like a far-off dream where they were kind of coinciding and now here we are,” Morales said. “And one thing is leading to the other, which is making me do better in the other and I love that.”

Everyday life is certainly good. As for his fight life, that’s not going pretty well too, considering that he enters his Saturday bout against Louis Smolka on the heels of an August victory over Drako Rodriguez that put him back in the win column for the first time since May 2019.

That doesn’t mean the 31-year-old is content, because he’s always looking to improve on his last performance, no matter the outcome.

“I'm never really satisfied, especially in the UFC, where the competition's been a little better and I haven't got the finishes that I've been looking for and that I was accustomed to as I was coming up,” he said. “I remember after this last fight, I was fairly frustrated because I really wanted to go out there and make the statement that I believe I can. I just couldn't get that moment. I couldn't get him right in front of me to do so. I ended up chasing it and wound up being frustrated. So, for me, right after a win, the sooner I can get back in the gym, the better because I know there will be more to work on.”

In other words, it’s safe to say he’s addicted to this stuff?

Well, there is worse trouble that he can get into, but there is a different energy in every fighter’s demeanor when things are going in a positive direction. And that’s certainly the case for Morales, whose UFC slate of 2-3 may be among the most deceiving records in the sport. 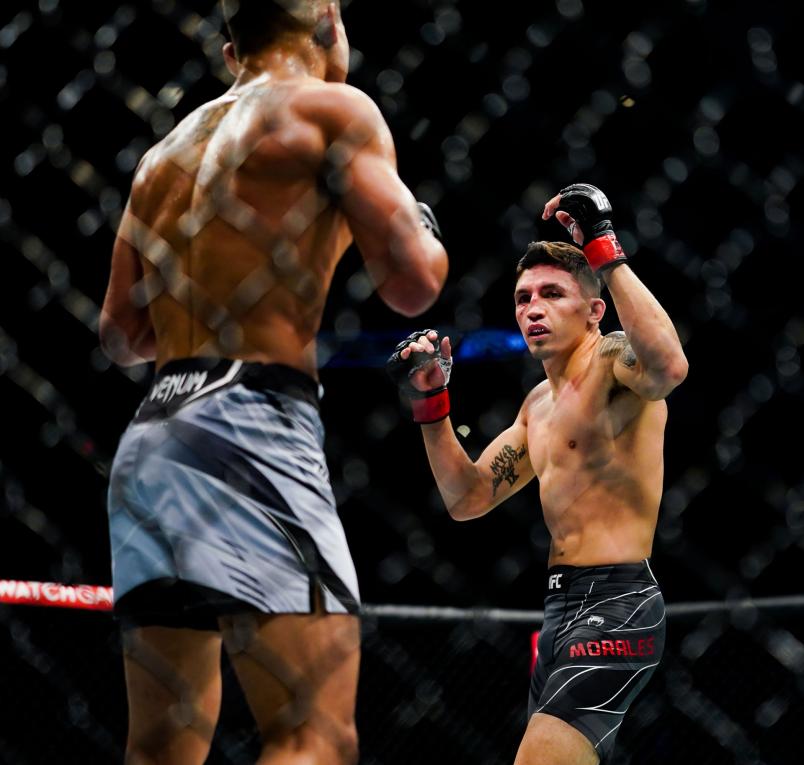 Vince Morales and Drako Rodriguez in the ring during the first round of their Bantamweight fight at Toyota Center on July 7, 2021 in Houston, Texas. (Photo by Alex Bierens de Haan/Getty Images )

“I'd like to think that,” said Morales, who is 10-5 overall as a pro and a lot better than those numbers would indicate. Luckily, the UFC and fight fans understand that a 10-5 record in MMA and a 10-5 record in boxing are two entirely different things.

“That's a weird thing I think about every now and then because I do feel like I have a lot of overwhelming support and then I look on paper,” he said. “I grew up in the boxing world a little bit, so I know what we're talking about when I look at people's records and stuff like that. And I'm like, 'Wow, these many people still believe in me when I'm 2-3 in the biggest show.' They must know that I'm still growing. Let's get to work then.”

These days, the work gets done with the Syndicate MMA squad in his new hometown, and while he’s putting in long hours in the gym, he’s not afraid of that hard work.

“For me, it almost seems like it's never enough,” said Morales. “I'm kind of obsessed with the growth process behind martial arts and what that brings for us. I like to find these new ways to grow not only my skill set because as I'm doing that, I've learned a little bit more about myself. As I go into each one of these fights, I learned something different about myself in there. It's all part of the growth, and from where I'm at, I'm not even half grown yet. So I'm just trying to continue the process, get better and see what else I can do with this.”

Getting to .500 in the UFC is step one. What happens after that is a mystery, but if the past is any indication, it’s going to be another chapter for a story that’s been memorable thus far, and one Morales isn’t taking for granted.

“My girlfriend does a good job of bringing the light on that,” he said. “Every now and then, we sit back at the end of a long day and reflect, and it's crazy the places that MMA has brought us and that's kind of what connected us. She was born in Japan and raised in England, and we met in Boise, Idaho because of MMA. So that brought us together, and MMA has taken me all over the world and I've gotten to see so many cool things and meet so many great people. It's literally everything I could ask for.”

“Except for maybe a few more wins.”