See Which Fighters We're Keeping An Eye On As They Head Into UFC Fight Night: Font vs Aldo
By E. Spencer Kyte, on Twitter @SpencerKyte • Nov. 30, 2021

Eleven months and 40 events down, one month and three more events to go before the UFC’s 2021 schedule is a wrap!

After a one-week respite, business resumes this weekend at the UFC APEX with another talent-rich card featuring an assortment of emerging names and budding contenders.

To make matters more enticing, it's being capped by a terrific fight in the bantamweight division, as New England Cartel member Rob Font goes in search of his fifth straight victory against Brazilian legend and former featherweight titleholder Jose Aldo.

Prior to the contenders in the 135-pound weight class hitting the Octagon to close out the show, a trio of talents closing in on contention in their respective weight classes will each cross the threshold into the UFC cage, aiming to close out this year with another victory and position themselves for marquee assignments to begin 2022.

Here’s a closer look at those competitors. This is the December 4 edition of Fighters on the Rise:

All Brad Riddell has done since arriving in the UFC is go 4-0 in one of the deepest, most competitive divisions in the promotion, extending his overall winning streak to seven to climb to No. 12 in the lightweight rankings.

The 30-year-old from Christchurch, New Zealand hasn’t garnered the same amount of attention as many of his City Kickboxing teammates, but each time out, Riddell has handled his business, displaying the kind of grit, toughness, and tenacity that makes him a nightmare matchup for anyone in the division and an emerging name to watch going forward in the 155-pound weight class. 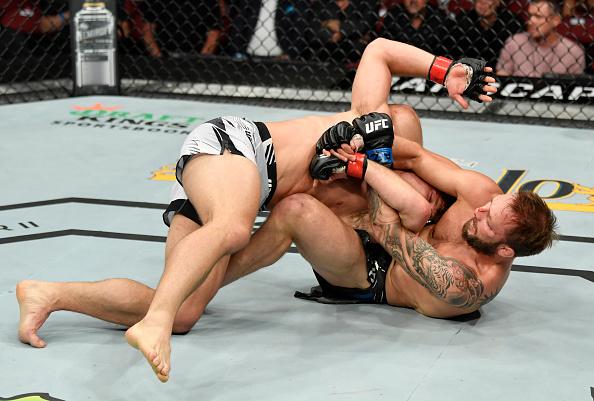 Brad Riddell of New Zealand works for a submission against Drew Dober in their lightweight fight during the UFC 263 event at Gila River Arena on June 12, 2021 in Glendale, Arizona. (Photo by Jeff Bottari/Zuffa LLC)

Paired off with Rafael Fiziev on Saturday, this is Riddell’s opportunity to graduate from being a hardcore darling with a reputation for being a tough out to a bona fide contender, as Fiziev similarly enters on his own four-fight run of success and brandishing far more hype, having earned three straight bonuses whole posting victories over veterans Renato Moicano and Bobby Green in the last 12 months.

RELATED: Brad Riddell: 'This Fight Is Different' | Brad Riddell Out To Show He Belongs Among The Best

While there is no one area that really stands out about Riddell’s game, there are no real holes either — he’s simply a technically sound, highly conditioned athlete that can hang in any type of battle, having flashed sharp, quick hands and a bottomless gas tank in Fight of the Night-winning victories over Jamie Mullarkey and Drew Dober.

A lot of eyes will be on the co-main event, and while plenty will start trained on Fiziev, do not be surprised if Riddell is the one people are talking about once the dust settles and the smoke clears.

The timing of things just hasn’t lined up right yet for Brendan Allen to get the shine he deserves as a potential rising star in the middleweight division.

The 25-year-old Contender Series graduate submitted Kevin Holland in the second round of his promotional debut in October 2019, seven months before Holland kicked off his breakout 2020 campaign. After posting additional wins over Tom Breese and Kyle Daukaus, the Louisiana native landed opposite Sean Strickland in a short-notice, catchweight affair that ended with Allen on the wrong end of a second-round stoppage. 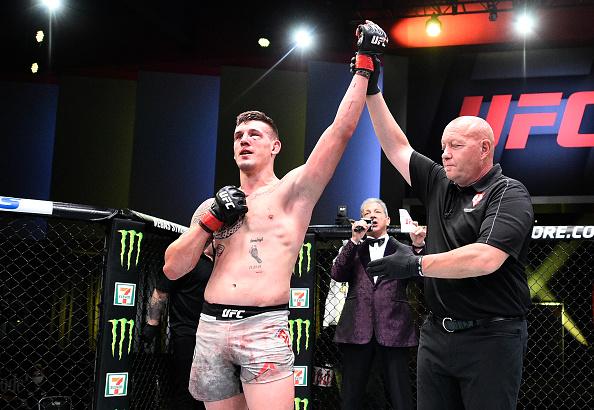 Brendan Allen reacts after his victory over Kyle Daukaus in their middleweight fight during the UFC Fight Night event at UFC APEX on June 27, 2020 in Las Vegas, Nevada. (Photo by Chris Unger/Zuffa LLC)

At the time, it was viewed as a sign that Allen wasn’t ready to hang with Top 15 talent, but with Strickland continuing to thrive and emerging as a dark horse contender in the 185-pound weight class, that setback doesn’t seem nearly as detrimental to Allen’s aspirations. And since then, the Sanford MMA product has consecutive victories over Karl Roberson and Punahele Soriano, looking like the potential contender many have tabbed him to be since his days facing tough competition under the LFA banner.

READ: Brendan Allen Knows How To Bring His Best On Fight Night

This weekend, Allen steps in with Chris Curtis in another short notice pairing that was originally supposed to see him share the cage with Top 15 stalwart Brad Tavares, then Georgian powerhouse Roman Dolidze.

Everything seems to be clicking for Allen at this moment, as he flashed his slick submission game in catching Roberson in a straight ankle lock in April before putting his striking skills and overall sharpness on display in his victory over the previously unbeaten Soriano in July. With another full camp under the tutelage of Henri Hooft and the team at Sanford under his belt, the best could still be yet to come for the talented youngster from “The Bayou State.”

There was a lot of hype and excitement surrounding Manel Kape’s arrival in the UFC at the start of the year, but unfortunately for the 28-year-old flyweight, things got off to a rocky start.

Kape, who rose to prominence under the Rizin Fighting Federation banner in Japan, dropped narrow decisions to Alexandre Pantoja and Matheus Nicolau in his first two appearances inside the Octagon. While both were close fights, Kape displayed a lack of urgency and little of the aggressive, attacking style that made his joining the UFC roster such an interesting story at the start of the year. 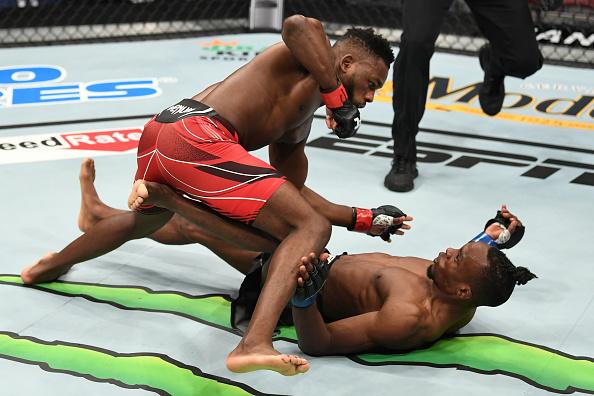 Manel Kape of Angola punches Ode' Osbourne in their flyweight bout during the UFC 265 event at Toyota Center on August 07, 2021 in Houston, Texas. (Photo by Josh Hedges/Zuffa LLC)

Facing the possibility of a three-fight slide in August, “StarBoy” finally got into the win column with a first-round knockout win over Ode’ Osbourne, blasting the Contender Series graduate with a flying knee late in the opening stanza. Unfortunately for Kape, the performance wasn’t all positive, as he missed weight for the contest by three pounds.

This weekend, Kape gets another opportunity to get everything done right when he steps in opposite Zhalgas Zhumagulov, a 33-year-old veteran from Kazakhstan who similarly lost his first two UFC appearances before rebounding with a first-round stoppage win in his third fight. Prior to joining the UFC roster, Zhumagulov registered victories over current UFC flyweights Tyson Nam and Tagir Ulanbekov, and former divisional title challenger Ali Bagautinov.

Kape expected to be challenging for championship gold by the end of his first year on the roster, but instead, he’s facing a critical assignment with a few lingering questions to answer this weekend. He’s looked better each time out and has gotten closer to being the dynamic force that rose to stardom in Japan, so it will be interesting to see if he can continue his progression and put it all together this weekend in Las Vegas.