They say, “familiarity breeds contempt,” but heading into his UFC debut earlier this year, familiarity bred a much-needed sense of comfort for Martin Buday.

“It helped me a lot,” Buday said of being in familiar surrounds ahead of his fight with Chris Barnett in April, just a few days prior to making the walk to the Octagon for a second time this weekend. “My first fight week in the UFC APEX was pretty similar to my Dana White’s Contender Series (DWCS) week. I just love the care of the UFC and how high level this company and its employees are.

“To be honest, I’m nervous almost always before my fights,” added the Slovakian heavyweight, who faces fellow DWCS alum Lukasz Brzeski on Saturday in his sophomore appearance inside the UFC cage. “I know I’m always well prepared, but I only showed like half of my potential. I hope my performances will be better and better.”

Don't Miss Any Of UFC Fight Night: Vera vs Cruz

All things considered, Buday’s debut was pretty strong, and if what he showed in April was only half of his potential, the heavyweight division may have a new ascending talent on its hands.

Paired off with the lovable veteran Barnett, the streaking 30-year-old controlled things from the outset, using his size and overall physicality to dictate the terms of engagement and crowd Barnett.

He grinded on Barnett along the fence, making him carry his weight while mixing in short punches and an assortment of knees. In space, Buday made use of his reach advantage, landing without being caught by much return fire, using his success to close the distance and grind on Barnett some more. 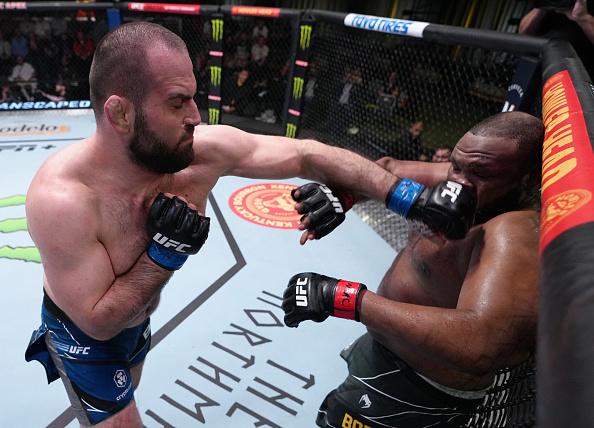 Through two rounds, the newcomer was in clear control and well on his way to a unanimous decision win, only for controversy to rear its ugly head early in the third.

Between rounds, Barnett complained to his corner about a potential broken rib, but he soldiered on, only to get stuck in the clinch once more. When Buday landed knees to the midsection, Barnett would wince in obvious pain before getting dropped by one roughly a minute into the frame.

Buday followed him to the canvas, throwing short, heavy-armed shots. Barnett rose to his feet and Buday stayed sticky around his waist, continuing to attack with right hands as the veteran covered up and moved his head to avoid the blows. Buday switched to throwing elbows, looking to get Barnett out of there, and the second blow sent him crumpling to the ground.

Referee Dan Miragliotta quickly called time, advising Buday that the blow was to the back of the head, and Barnett was ultimately unable to continue, sending the fight to the scorecards. The newcomer claimed a unanimous decision victory, but the unfortunate ending took a little shine off an otherwise excellent performance.

“What can I say? Who wouldn’t be happy to win their UFC debut?” he said when asked to reflect on his first foray into the Octagon. “It’s a shame I didn’t deliver a finish, I think my performance was good.

“I followed our game plan but didn’t show much of the boxing that I trained for in my camp, until that unlucky elbow. I was really scared I would get disqualified but, at the end of the day, I’m happy it went to a technical decision.

“I know it was a mistake, that situation around that elbow; that’s why I wasn’t celebrating the victory after the fight, in the cage,” added Buday.

“Overall, it was a really great experience. I can’t really explain the feelings — it was just awesome; a dream come true.”

And now, four months after his successful debut, the DWCS alum is ready to put his nine-fight winning streak on the line against Brzeski on Saturday.

Like Buday, his Polish opponent this weekend matriculated to the UFC via Dana White’s Contender Series, earning a contract and maintaining his place on the roster despite testing positive for a banned substance in his post-fight drug screening.

Unbeaten in his last seven appearances, Brzeski is a quality second test for Buday this weekend, and someone the UFC sophomore was already quite familiar with before being tabbed to fight him this weekend in San Diego.

“Brzeski also came from DWCS, and I almost had a fight with him in my previous promotion, Oktagon MMA, so I know him and his style pretty well, and was super-happy about this matchup,” said Buday, a mountain of a man who walks around at roughly 300 pounds and drops a considerable amount of weight in camp in order to make the 265-pound heavyweight limit. “He is good in the standup but, like all Polish fighters, he is good on the ground too.”

While he’s not competing in the familiar surrounds of the UFC APEX this time around, Buday has already gotten the first one out of the way, and while it didn’t go exactly as planned, he still came through it unscathed and victorious.

After four months of further training and continued work to make his short-term goal of breaking into the Top 15 a reality as quickly as possible, “Badys” is ready to share the Octagon with Brzeski and collect his second UFC victory.

“It would be amazing,” he said when asked what it would mean to start his UFC career with consecutive victories. “A huge success for me, my team, and also my country.

“I will try to use my improving boxing and standup, but I also think I will have good movement and good cardio,” he added, forecasting how the fight will play out. “I believe I’m the much stronger fighter.”

As for what comes next…

“I don’t like to talk or think about this,” he said. “I only have one target now, and that’s to get my hand raised on August 13 after beating Lukasz Brzeski.”