Miller Excited To Test Himself Against Guida

Since Jim Miller made his UFC debut almost 11 years ago, he’s fought in New Jersey seven times. It’d be an understatement to say he’s comfortable stepping into the Octagon in his hometown state.

But there’s always the debate: is fighting in your home area a positive or negative? The discussion is sparked once again as Miller makes his eighth Garden State appearance as a member of the UFC roster this Saturday in Newark against Clay Guida.

The obvious detriments? Juggling ticket requests from family and friends, and the pressure to perform. That’s not necessarily the case for Miller – who said everyone around him knows not to pester him. Miller is a veteran in the game – he holds the all-time victory record for the UFC lightweight division – so the obvious things don’t bother him as much.

“Driving to the hotel instead of the airport and not flying feels weird. I feel like I have to go through that for fight week to start, I feel like a day behind, almost.”

Ultimately, the benefits may outweigh the detriments. Miller said his friends, family and students at the gym are coming to the fight and he’s happy they get that opportunity. And at the end of the day, you’re still not sleeping in your bed at home.

Speaking of veterans of the game, Miller’s opponent is one of a few that could match his credentials. In fact, with over 50 combined UFC fights between Miller and Guida, it’s a surprise they haven’t met before.

For Miller, it may have been a blessing in disguise that it took some time for them to clash.

“If we fought two or three years ago, I was in a rough spot and it would’ve been extremely difficult to deal with his pace,” Miller said. 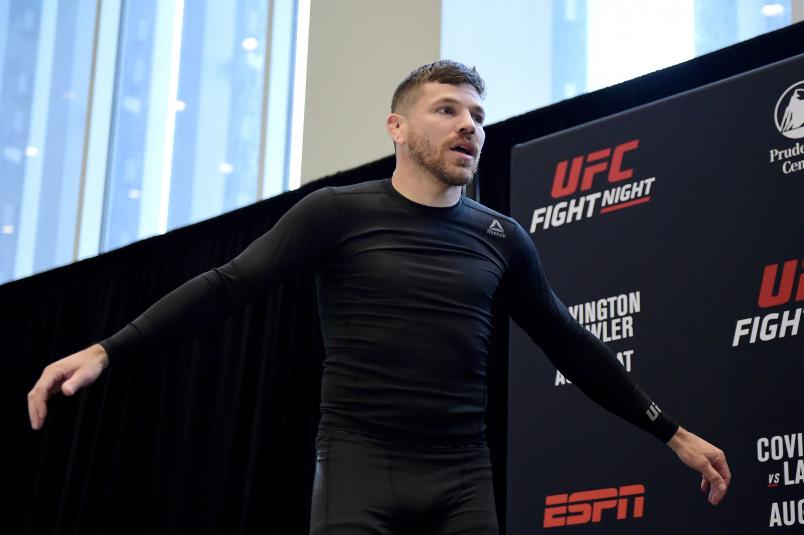 Two years ago Miller was amidst one of the roughest stretches in his career. He lost four consecutive fights but has since climbed back. He’s won two of his last three and he views the test Guida presents as the ultimate test to see if he’s truly back to form.

“This is a fight that could’ve happened at any time,” Miller said. “But me being where I am right now, physically, it couldn’t have been better for me. I’ve scratched and clawed my way back and I’m excited for the test. I know what he brings to the table.”

Miller isn’t the only one excited for their co-main event scrap on Saturday. Fans and the MMA community have the bout pegged as a potential Fight of the Night candidate. And while Miller agrees, he admits it’s not his goal.

“This fight could live up to the hype. We’ll both be aggressive and that’s the beauty of it. This fight does have potential to be one of those great ones. Of course, I’m not training for that. The first mistake he makes is the end of the night.”