On October 30 in Abu Dhabi, Li Jingliang will make his second appearance of 2021 as part of the stellar UFC 267 main card where he’ll meet the surging Khamzat Chimaev.

The undefeated Chimaev has been making waves in the welterweight division through three UFC appearances, finishing all three in less than five combined minutes of Octagon time. And despite more than a year passing since his last bout, he was a -440 favorite at the time of this writing.

Enter “The Leech.” No stranger to spoiling the evenings of heavy favorites, Li is arguably the first UFC opponent for Chimaev that wields his same extraordinary power. Over the course of 14 UFC bouts (and 24 overall), the Beijing native has been a puzzle precious few have solved. Below, we take a sampling of some of his finest handiwork.

Despite being sidelined from the Octagon for over two years, “The Argentine Dagger” entered his Fight Island meeting Li Jingliang as a sizeable favorite. He even intoned to the press that it was a mistake for Li to accept the bout. Maybe it was ring rust, maybe it was an abundance of caution, but the fight belonged almost solely to “The Leech,” who got to work early and never took his foot off the gas. Perhaps it was because Ponzinibbio was on alert for Li’s trademark right hand that he took his eye off of his left, an explosive surprise that put him on his back.

Heading into this Denver fight night, Bobby Nash predicted a KO in less than two rounds. He ended up being correct, save for the fact it would be Li executing the finish before the second horn. A wild back-and-forth affair until its conclusion, Nash was successful in finding his target and unloading. But as announcer Jon Anik noted, Li was “absolutely fearless” when it came to getting hit. Both men threw with everything they had, but it was ultimately “The Leech” who proved more durable, ending Nash’s evening with the sneakiest of overhand rights.

The first finish of Li’s UFC tenure was an emphatic premonition of the thunder that was coming when he dispatched a game Dhiego Lima in less than 90 seconds. Derided in his first two UFC outings as being linear and predictable, “The Leech” showed flashes of a deeper arsenal in this brief outing, namely some smart combinations and a lethal right uppercut that Lima had no answer for. This is the performance that made the welterweight division start to take notice.

A +250 underdog heading into the fight, Anton Zafir nonetheless took control of the fight early, dropping Li to the mat and controlling him in half-guard. It felt for a moment like the Australian might cruise to victory until Li dismantled a guillotine attempt and scored a takedown of his own. From there, "The Leech" needed just four swift punches to the face of his opponent to prompt referee Chris Tognoni to step in and end the onslaught. 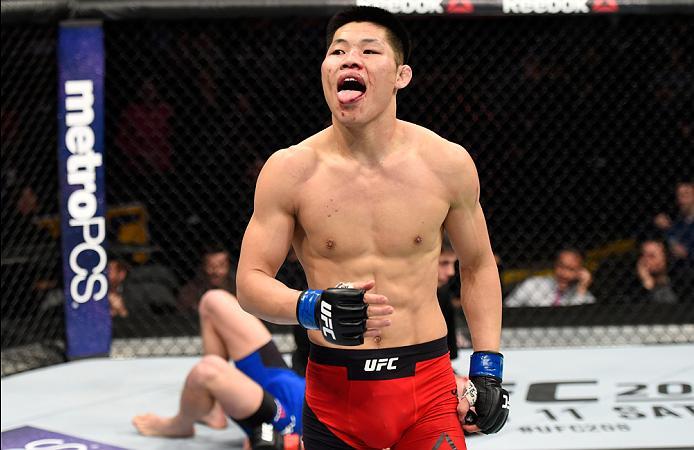 DENVER, CO - JANUARY 28: (R-L) Li Jingliang of China celebrates his knockout victory over Bobby Nash in their welterweight bout during the UFC Fight Night event at the Pepsi Center on January 28, 2017 in Denver, Colorado. (Photo by Josh Hedges/Zuffa LLC/Zuffa LLC via Getty Images)

The perfectly timed right hand by now had become a recurring theme in Li’s work. He mastered it the way other artists might master sculpture or painting. Exhibit A: an absolute missile down the middle to fold the perennially tough Zak Ottow. To his credit, Ottow had the wherewithal following the strike to frantically attempt scrambling to his feet, but there was no escaping the barrage of right hands that kept him glued to the mat, and eventually, Herb Dean had seen enough.

Of the opponents “The Leech” has finished over his extensive career, David Zawada hung around much longer than most, not succumbing to Li’s attack until the last minute of the final round. Described by the announcers as “a different proposition,” Zawada in fact fought at a very high level and had more than his share of big moments throughout. But a flurry of punches from Li at the end of the second round got the Beijing crowd to their feet, and their energy propelled through a beautiful Round 3 campaign, punctuated by a fight-ending kick to the solar plexus.