No, your eyes weren’t deceiving you earlier this year when you binge watched Cobra Kai and saw Eryk Anders battling it out with Johnny Lawrence. It was the middleweight standout making his acting debut in one of Netflix’s most popular series. And it may not be the last time we see “Ya Boi” breaking out his acting chops.

“I would love those opportunities to keep showing up,” said Anders. “The UFC's opened doors for me for future endeavors past fighting, and the sun is setting on my career, so I'm always looking for the next thing to better myself or challenge myself, keep pivoting. The acting thing kind of fell into my lap, so I'm pursuing to see how far I can go.”

“I'm 35, I've got two fights left on this contract, so these next two fights are pivotal,” said Anders, who returns on Saturday to face Kyle Daukaus. “I've got to go out there and I've gotta win them and get a new contract and let it ride. I'm all about exciting fights, hunting the finish and trying to put guys out. As long as the UFC wants to keep paying me to do so, I will happily oblige.” 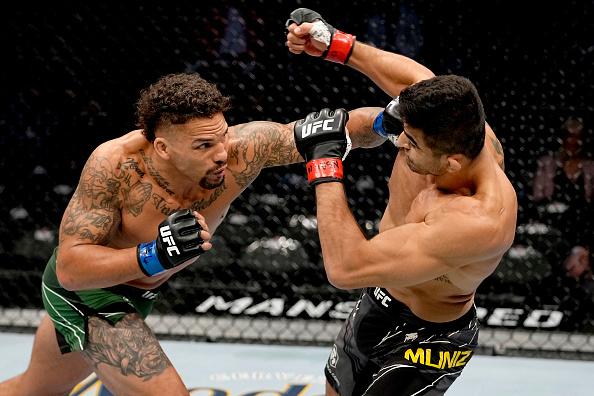 Andre Muniz of Brazil is punched by Eryk Anders in their middleweight bout during the UFC 269 on December 11, 2021 in Las Vegas, Nevada. (Photo by Jeff Bottari/Zuffa LLC)

Anders, a member of the roster since the summer of 2017, when he seemingly came out of nowhere to knock out highly-regarded veteran Rafael Natal in less than three minutes, has delivered on his promise ever since, and while he’s had a rollercoaster ride across two divisions, a lot of the downs on that ride could simply be chalked up to bad luck, such as his most recent bout in May with Junyong Park.

Looking to bounce back from a submission defeat to Andre Muniz five months earlier, Anders fought well against “The Iron Turtle,” and most believed he had earned the decision after three rounds. Two of the judges disagreed, and Anders had a split decision loss.

“I think Park and I were on the same page,” Anders said. “Just look at his demeanor after the fight. And after they read the decision, he's excited and shocked. It's not his fault they read that decision, but it is what it is.”

Of 11 media members polled on the website MMADecisions.com, nine saw Anders as the victor, but the Texas native knows that won’t change the official verdict.

“I don't do the whole moral victory or what if, and, shoulda, woulda, coulda,” he said. “I just signed the contract, I went out there, showed up, fought, and the cards fell however they fell. It is what it is. You get up, lick your wounds and keep it moving.” 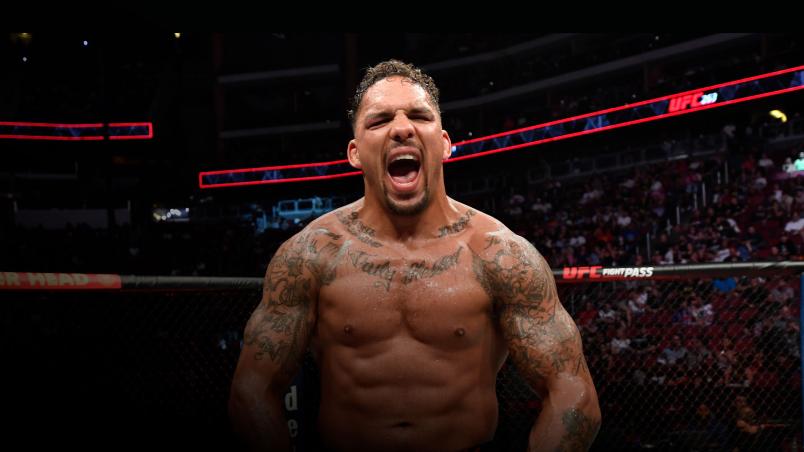 Eryk Anders reacts after his victory over Darren Stewart of England in their light heavyweight fight during the UFC 263 event at Gila River Arena on June 12, 2021 in Glendale, Arizona. (Photo by Jeff Bottari/Zuffa LLC)

That’s always been Anders’ attitude, and it’s served him well, at least for his sanity in dealing with the twists and turns of the sport.

“I assure you, I tried to end the fight as quickly as possible,” he said. “Of course, I would love to go out there, throw one punch and knock the guy out in 10 seconds, but some of these guys are tough and they can take it. I hit that dude a lot, I hit him hard. He just didn't drop. Trust me, if I can keep it out of the judges' hands, then I absolutely would, but that's what they're there for, to judge the fight.”

Admitting that the defeat “stung for a little bit longer,” than usual, Anders did eventually shake it off, and now he’s all-in on his fight with Philadelphia’s Daukaus. How focused is he? He laughs when asked his opinion on the shakeup at the top of his division with Alex Pereira defeating Israel Adesanya last month.

“I'm worried about my guy,” said Anders. “I'm still far away from the championship, so why would I worry about that guy when I've got another guy to fight? Daukaus has got my full attention.”

As for the fight going to the judges again, Anders’ gameplan is crystal clear.

Then, all of a sudden, that sun will be shining and not setting. What a five years it’s been. So far.

“A lot of ups and downs, but I can't complain,” Anders said. “It's been fun. This is my 15th fight in the UFC, so I've made enough money where I can retire and be comfortable. So this beat anything I could have done working at a desk for 30 years. I made my retirement in five, so that's cool. I like saying that.”