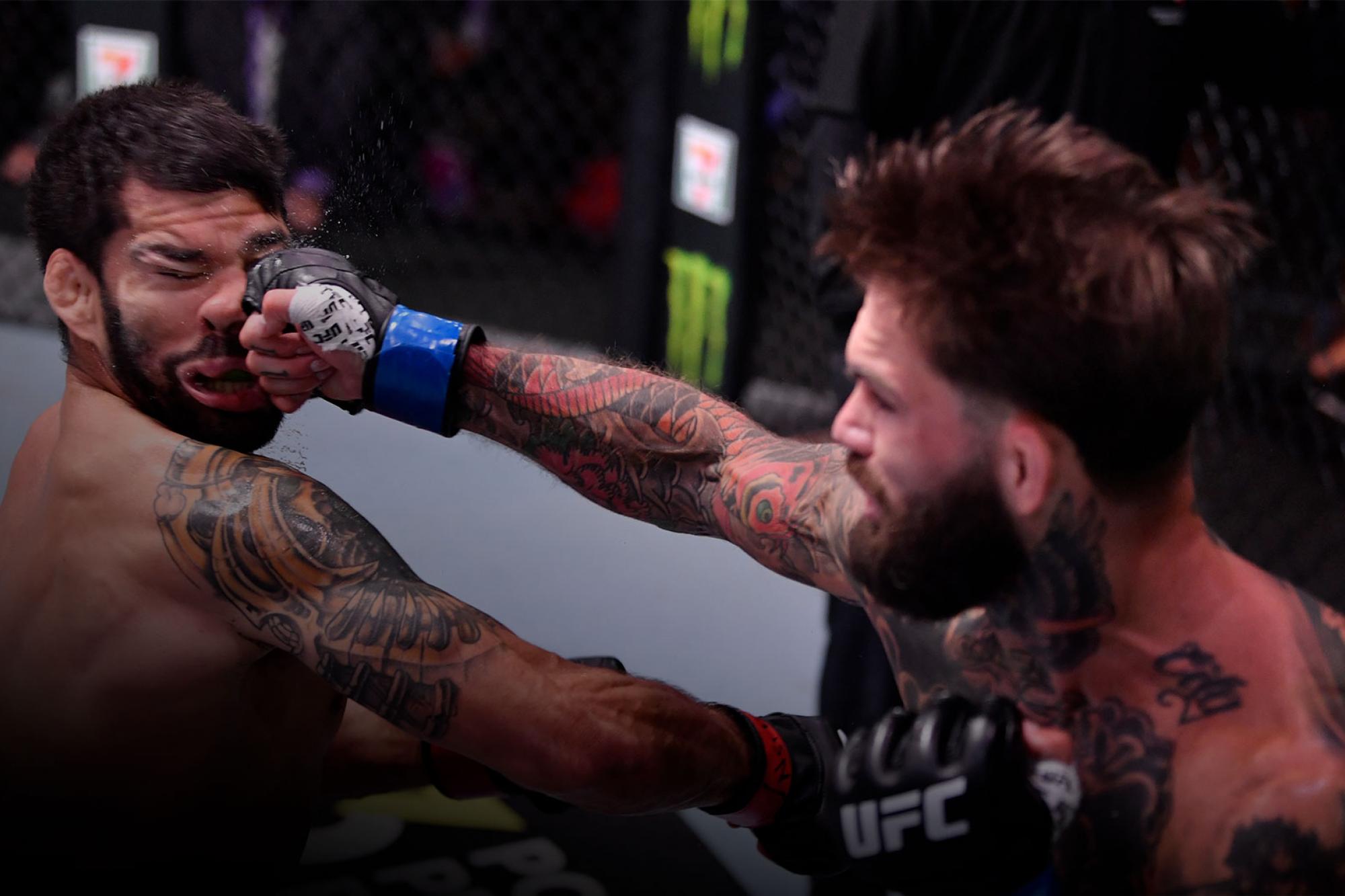 In today's edition of the 2020 Half-Year Awards we look at the biggest knockouts to date
By Thomas Gerbasi, on Twitter: @TGerbasi • Jul. 2, 2020

The highly unofficial UFC.com awards season continues with the top knockouts of the first-half of 2020 and how we called them on fight night.

Bantamweight veteran Tyson Nam got his first UFC victory in spectacular fashion on his third try, knocking out Octagon newcomer Zarrukh Adashev in the first round.

After a brief feeling out process, a leg kick by Adashev was met by a counter right hand upstairs by Nam, and that was it, as Adashev fell hard to the deck, with referee Herb Dean stopping matters 32 seconds in.

Veteran lightweight Drew Dober picked up a big win in prelim action, as he knocked out highly-regarded prospect Nasrat Haqparast in the first round.

Haqparast was swinging for the fences from the start, but the experienced Dober remained calm and waited to pick his shots. And when he landed with a counter left, it was basically game over. Haqparast fell to the mat and a series of unanswered blows brought in referee Mark Smith to halt the fight at 1:10 of the opening frame.

After all the delays, Calvin Kattar and Jeremy Stephens finally got to throw hands and it was worth the wait, with the two featherweight contenders battling tooth and nail until Kattar scored a second round knockout of the “Lil’ Heathen.”

Stephens got off to a fast start, peppering Kattar with kicks as he stalked the New Englander. As the round wore on Kattar began to find his range with his punches to the body and head, but Stephens’ leg attacks were still getting through. Kattar did drill Stephens with a right hand late, reminding the Iowan that he wasn’t going anywhere.

Kattar began pounding away at Stephens’ leg in the second, and soon both fighters were switching stances in order to stay out of harm’s way. That left the two to trade punches, and Kattar’s shots were finding a regular home. With 2:20 left, a right elbow sent Stephens crashing to the deck. A left elbow on the mat cut Stephens, and referee Jason Herzog moved in to halt the fight at 2:42 of round two.

No one expected the heavyweight fight between Francis Ngannou and Jairzinho Rozenstruik to go three rounds, and Ngannou made sure it didn’t get out of the first minute, as he knocked out the Suriname native in 20 seconds.

The fighters met in the center of the Octagon, Rozenstruik landing a couple leg kicks, but as soon as the fists started flying, it was all Ngannou, as he followed up a couple wild punches with a left that landed flush, sending Rozenstruik down against the fence. After a follow-up by “The Predator,” referee Dan Miragliotta stepped in and halted the fight.

Wineland landed the first significant punch of the fight, a right hand upstairs in the second minute, but O’Malley took it well and drilled Wineland with a right hand a minute letter. It was a sign of things to come, as another right hand landed flush and knocked Wineland down and out, with no follow-up shots necessary as referee Herb Dean stopped the bout at 1:54 of round one.

Garbrandt put together a disciplined, technical attack in the opening frame, with his kicks to Assuncao’s leg his main weapon as he piled up the points. Assuncao did get in his shots, though, an impressive feat given the gap in speed between the two.

The battle remained close in the second, but a flash knockdown scored by Garbrandt with a little over a minute left was probably going to get him the round before “No Love” made sure there would be no third frame, as a vicious right hand in the midst of an exchange ended the fight immediately at 4:59 of round two.