Rob Font Sets The Benchmark For The New England Cartel

Tyson Chartier And Calvin Kattar Speak To Rob Font's Importance To The New England Cartel
By Zac Pacleb on Twitter @ZacPacleb • May. 17, 2021

Spend enough time around The New England Cartel, and you’ll hear them talk about “big moment opportunities,” which is what Rob Font has ahead of him in the form of his first main event fight in the UFC. Font hasn’t taken the easiest or fastest road through the bantamweight division since making his debut in 2014, but nearly seven years into his UFC career, the 33-year-old is set to fight former champion Cody Garbrandt.

After a major knee injury kept him out of action for a year following his win over Ricky Simon in December 2019, Font knocked out former title challenger Marlon Moraes, catapulting himself into the Top 5 and potentially a couple big wins away from a title shot. Despite the big performances and increasing spotlight on Font, he remains relatively soft-spoken around fight week. However, few have a better sense for his journey to his current spot than Tyson Chartier and Calvin Kattar, his coach and teammate, respectively, from “Boston’s 5th team.”

“(Font) kind of sets the tone for the room,” Chartier said. “He’s going to go there, get to work, work hard, and when the session is done, you can joke around, and then outside of the gym, he’s kind of a low-key ball-buster. He’s quiet, he’ll listen, and then the next thing you know, he snipes you with a good one. He’s just a funny guy, but he’s also a leader. You look at what Calvin’s done, and a lot of that is him benchmarking what Rob has done.” 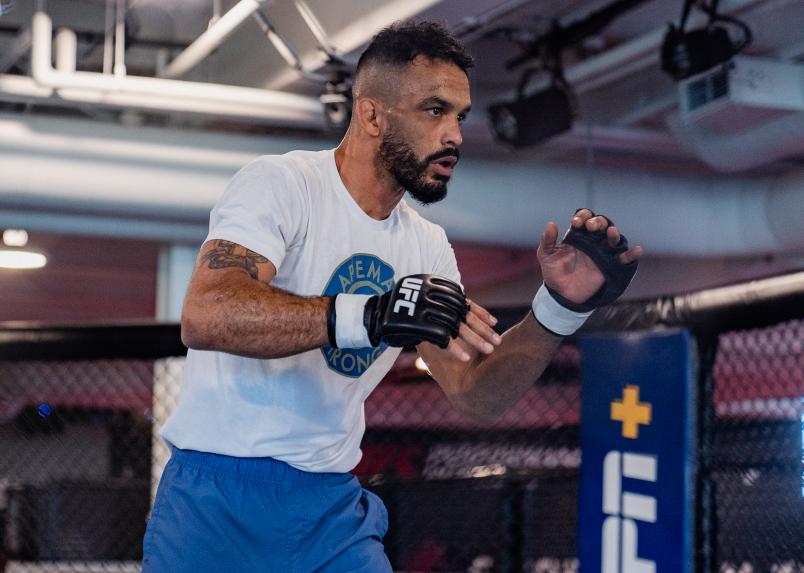 2020 was a bit of a breakout year for the team and Kattar in particular. After a strong 2019, Kattar took advantage of his biggest stage and knocked out Jeremy Stephens with a hellacious elbow when UFC got its schedule restarted with UFC 249. He followed that with a main event victory over Dan Ige just a couple months later on Fight Island and parlayed those wins into a main event spot on ABC against former champion Max Holloway. Although Kattar lost that fight, it proved that the team as a whole was not only on the rise, but here to stay.

With Font days away from performing on the largest stage of his career, Kattar has slipped into the role of supportive teammate.

“We’re constantly pulling the best out of each other, getting ourselves in the gym, back to work because we know that without that, results don’t come,” Kattar said. “They don’t happen. We just try to force each other to level up, put in the work. I benchmark a lot of times and a lot of things I’m doing off of Rob Font. I know he’s one of the hardest working, not only in the division, but in the UFC, and so if I can do that, then I know I’ll be ready to take on whoever they put me in there with. He’s like the Energizer Bunny. He doesn’t stop. He’s constantly putting in the work and outperforming, outworking everyone in the gym, and that translates to fight night.”

It’s a long way from when the team got together. Although Chartier has worked with Font since the beginning, Kattar was a different story. Chartier met Kattar on the set of Here Comes The Boom and extended an invite to come train with them. At the time, Kattar was in the midst of a three-year layoff as he ran the regional promotion Combat Zone, which he still owns, but he and Font were aware of each other because they were essentially the area’s two top featherweights. They figured, at some point, they would end up fighting one another. 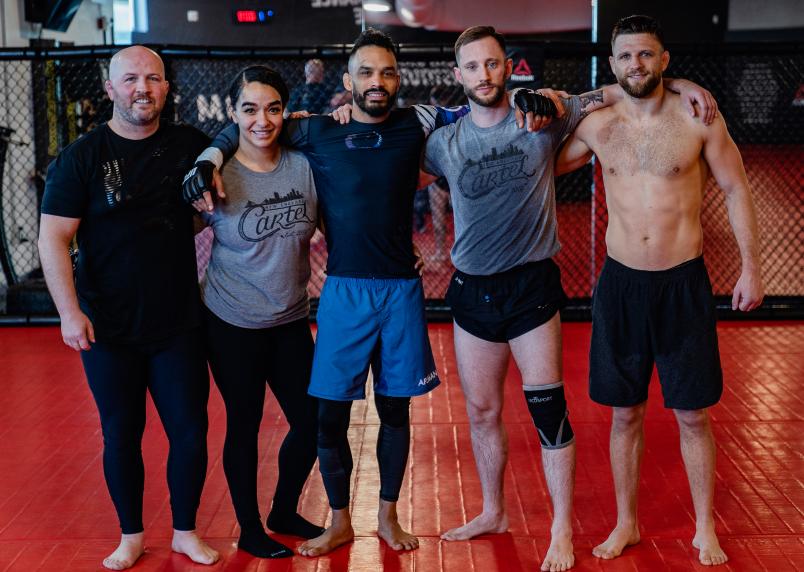 Rob Font and Calvin Kattar trains at the UFC Performance Institute on May 13, 2021. (Photo by Zac Pacleb)

Rob Font and Calvin Kattar trains at the UFC Performance Institute on May 13, 2021. (Photo by Zac Pacleb)

“Tensions were high, and respect is earned, not given,” Kattar said. “Every time there was a go, we’d try and get the better of each other. We still do to this day. It’s a healthy push now.”

With the help of Chartier and Font’s move down to bantamweight, that tension melted into friendship. The competitiveness still follows, even when the two aren’t in the gym.

When it comes to helping each other prepare for fights, though, it’s a cohesive and collaborative process. When asked who is the harder one to be around during fight week, Kattar and Chartier said it’s pretty much a wash. They all understand the task at hand and the work required to yield their desired results. 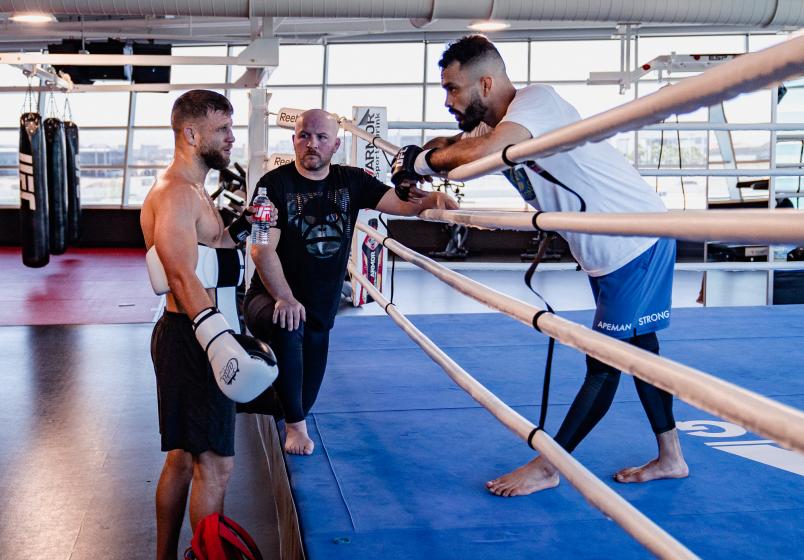 Rob Font and Calvin Kattar train at the UFC Performance Institute on May 13, 2021. (Photo by Zac Pacleb)

Rob Font and Calvin Kattar train at the UFC Performance Institute on May 13, 2021. (Photo by Zac Pacleb)

It doesn’t take a long time to see the brotherly vibe around the team. From putting in work to busting each other’s chops, the atmosphere is a cohesive one that hasn’t cracked as the stakes have risen in the last year.

“When you’re alone with us, you can tell that we’re brothers,” Chartier said. “You can that there’s trust. You can tell that everybody understands their role. Nobody has an ego, and nobody is above any task to get the job done. Over time, it’s just been such a strong bond that when Rob is walking out to that cage, me and Calvin and everybody else, we know he’s put in all the work and he’s going to perform. He also knows, when he’s walking out, that everybody on his team put in all the work they could to help get him there. That gives everybody more confidence going into the fight.”

As Font trained for Garbrandt, Chartier said he is seeing a “more mature” version of Font – not in the sense that he was immature before, but more so a sign of the growing belief in his own abilities. 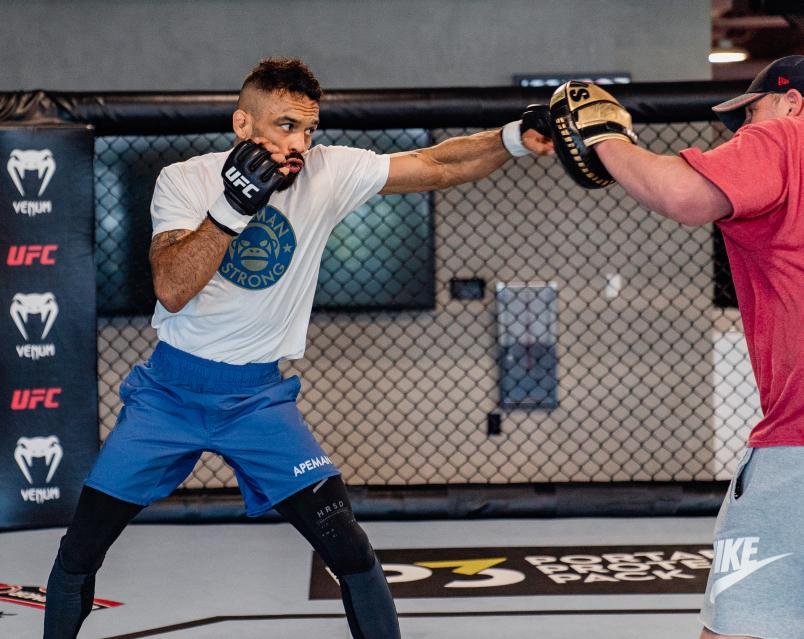 “It’s almost like now he knows he belongs here,” Chartier said. “It’s finally happening. It’s validating, especially that last win, and then he gets here where he knows he could be and could compete, and he’s very deserving of a main event spot, and I just see a super confident and mature Rob Font now.”

Chartier called Font is a “team captain,” one that helped Kattar before he made his own UFC debut in July 2017. Two weeks before that fight, Kattar attended Font’s fight at UFC 213. Both men came away with victories that month, which one could say was the start of the team’s rise in the promotion.

Now, though, after years of ups, downs, injuries and adulation, the Cartel features two fighters in the Top 5 of their respective decisions. With a win on May 22, Font could take one step closer to the largest “big moment opportunity” available – a fight for gold.

“I think he couldn’t be more ready for the opportunity,” Kattar said. “I’m really just excited for him. His first main event, it’s overdue - long overdue - and they’re going to see why come Saturday night when he steps in there. They’re going to realize that Rob Font is the real deal, and they gotta start showing him some respect.”