Rakic Has One Goal In Mind

“And after I beat Jimi, a ranked guy, I’m going to take his position and then there are only a few guys left between me and the gold,” he added. “My focus is only on those few guys in front of me."
By E. Spencer Kyte • May. 28, 2019

Vienna has been hailed as the best city in the world to live in for 10 years running and yet every few months, Aleksandar Rakic packs his things, says goodbye to his wife, his family, and his friends and makes the transatlantic journey to Coconut Creek, Florida for six to eight weeks at a time.

Trading in the beautiful Austrian capital for “The Butterfly Capital of the World” doesn’t sound like a very good exchange on the surface and the Spartan lifestyle he keeps while stationed in the South Florida outpost pales in comparison to the rich home life he’s built for himself in Vienna, but every time he puts his signature on another fight contract, the 27-year-old light heavyweight makes the 11-hour flight out of his comfort zone in order to reap the benefits of another training camp at American Top Team.

“It’s not easy,” Rakic said of leaving home to venture Stateside in order to train with the elite cast of coaches and fighters at ATT. “It’s hard to leave my wife, my family, my friends and go there to train, but I’ve done it my previous three fights and it felt pretty good. It’s not long — six, seven weeks — but it makes me a better person and a better fighter, mentally and physically.

“Of course, I could stay in Vienna and do my camp here, but I don’t want to leave anything to chance,” continued Rakic, who faces off with veteran Jimi Manuwa on Saturday night in Stockholm. “When I get in the Octagon, I want to be more than 100 percent ready, especially mentally, and when I spar the guys at ATT and it goes well for me, it gives me a boost mentally.

“When I’m training here (in Vienna), I have the same sparring partners I’ve always had and I don’t have that last boost of self-confidence and that’s the reason I go to American Top Team — to get that boost and to get better in every area. When I step into the Octagon, I know I did everything right and I’m going in with tremendous self-confidence.”

Thus far, the emerging light heavyweight has enjoyed nothing but success since adding trips to American Top Team to the work he does at home at Gym 23.

He won his UFC debut in September 2017 against Francimar Barroso, but was forced to the sidelines for the better part of the next year after suffering an injury. When he returned to action in July, Rakic squared off with unbeaten American Justin Ledet, a former heavyweight who had won three straight appearances inside the Octagon before deciding to move down a division.

Though he entered as the underdog, Rakic left as someone to watch in the 205-pound ranks, delivering a masterful performance while picking apart Ledet on the feet and showcasing some of the secondary pieces of his game. Five months later, the promising upstart picked up his third straight UFC win with a first-round finish of Devin Clark in a chaotic, entertaining bout that kicked off the festivities at UFC 231 in Toronto.

“Last year was a very good year for me. I fought two times, got two good wins and I improved a lot,” said Rakic, who has won 11 straight overall after dropping his professional debut. “The Ledet fight gave me a lot of confidence in my wrestling and my grappling and I showed that I am a complete fighter. It was the most important win for me and it meant a lot to me, more than the victory over Devin Clark because I showed I can wrestle, I can grapple and that I have good cardio.

“I was calling out a top-ranked fighter in Hamburg after the fight with Ledet and I was hoping to get a top-ranked guy,” he added. “It didn’t go that way, they gave me Clark, but it was one step closer to the top and now finally the UFC gave me a top opponent and another chance to show the world that I belong in the Top 10.” 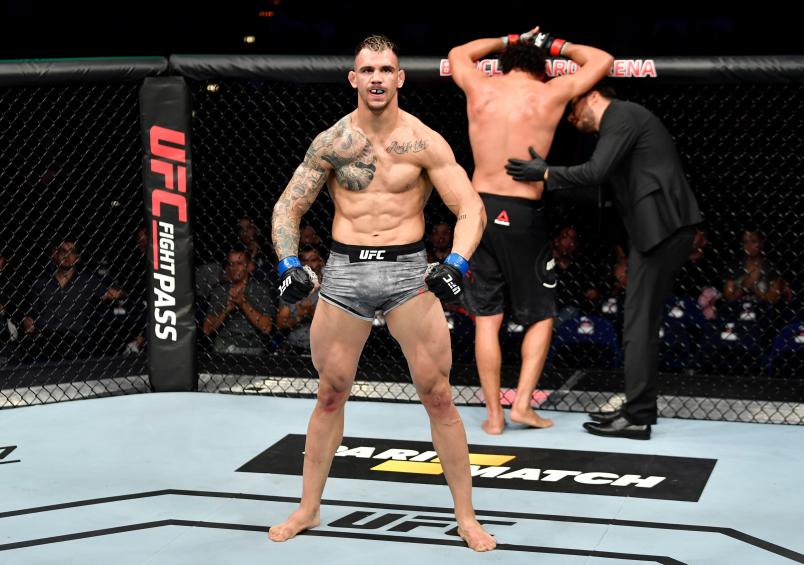 HAMBURG, GERMANY - JULY 22: Aleksandar Rakic of Austria reacts after the conclusion of his light heavyweight bout against Justin Ledet during the UFC Fight Night at Barclaycard Arena on July 22, 2018 in Hamburg, Germany. (Photo by Jeff Bottari/Zuffa LLC/Zuffa LLC via Getty Images)

HAMBURG, GERMANY - JULY 22: Aleksandar Rakic of Austria reacts after the conclusion of his light heavyweight bout against Justin Ledet during the UFC Fight Night at Barclaycard Arena on July 22, 2018 in Hamburg, Germany. (Photo by Jeff Bottari/Zuffa LLC/Z

Saturday’s pairing with London’s “Poster Boy” is a significant step up in competition and easily the toughest test of Rakic’s relatively young career, as the 39-year-old Manuwa has spent the better part of the last five years stationed in the upper reaches of the Top 10 in the light heavyweight division, and has shared the cage with a host of the 205-pound weight class’ top names.

But where Rakic is on the upswing and entering with three consecutive victories inside the UFC cage, the British veteran is coming from the opposite end of the spectrum, making the walk this weekend inside Stockholm’s Ericsson Globe having dropped his last three appearances.

“Jimi Manuwa is a great fighter,” Rakic began, sharing his thoughts on the man he faces on Saturday. “He’s been in the UFC a long time and he’s been ranked in the Top 10 for a long time as well — I think the highest he climbed in the rankings was No. 4 — so I was very happy to get matched up with him.

“I respect him a lot and I know him a little personally — we trained together for a couple days in Sweden four or five years ago — and we fought on the same card last year in Toronto, so I saw him there and we talked. I respect him, but when it comes to business, I don’t care who I’m fighting and I know that beating Jimi Manuwa will bring me one step closer to the gold.”

Riding high off his tandem victories in 2018 and with his first child on the way, Rakic is laser-focused on adding to his winning streak this weekend and taking another step forward in the light heavyweight division.

Though not as flush with familiar names as in previous eras, the 205-pound weight class is suddenly brimming with emerging talent and new faces jockeying for position in the title chase, making every result all the more important.

Finally getting the opportunity to face a ranked opponent for the first time, Rakic sees this weekend’s showdown with Manuwa as the next step in his progression towards the top of the division and he has every intention of usurping his place in the rankings and only moving forward from this weekend on.

“I expect a good fight, a hard fight, of course — Jimi is a helluva fighter — but I’m prepared for him and everybody in the division,” said Rakic. “He’s going to do what he does all the time — push forward, come with his hooks, strong kicks — but I’m prepared for everything he brings to the table and even more.

“And after I beat Jimi, a ranked guy, I’m going to take his position and then there are only a few guys left between me and the gold,” he added. “My focus is only on those few guys in front of me. I don’t want to turn my head and watch what’s behind me; I’m only focused on the guys ahead of me and how I can climb the rankings and one day fight for the belt.

“I don’t care who I get next after I beat Jimi, but it has to be someone ranked higher than me.”