Miranda Maverick is out to make a statement on Saturday night. And what might that statement be?

That remark stems from the last time fans saw her in the Octagon against Maycee Barber in July. Maverick fell on the wrong side of the judges’ scorecards and lost to Barber by split decision. The bad taste of losing is still in the 24-year-old’s mouth, which fuels her fire even more for her fight this weekend at UFC 269.

“I have my opinions about that fight, and I do still feel like it was a good performance,” Maverick said. “I went out there and performed at one of my best, but it just wasn’t good enough that night, and Saturday night I plan on going out there angrier, madder, and hungry to get that win back into my column and start working my way back up the ladder.”

This time around, Maverick switched up camp, moving from Virginia to Colorado to join Team Elevation. To elevate (pardon the pun) her talent to the next level, Maverick felt that she needed to switch from a gym focused on Muay Thai and jiu-jitsu to a gym that was centered more around MMA.

She was able to choose what was best for her instead of choosing somewhere based on its location for school or home.

Even though Maverick considers herself world-class and has high aspirations for her career as a fighter, it isn’t the end game for her. This allows her to take a step back and look at the overall picture, which is something that she did after her loss in July.

"I do deserve to be in those rankings."

“I have other dreams at the end of this that I want to do, and fighting is just one aspect of my life,” Maverick said. “I think that allows me to take pressure off the fighting aspect of my life and train for fun and because I want to learn, not just train because I absolutely have to. I think that frees me up to relieve that pressure on the training aspect and put it more on me improving as a person.”

She’ll match up this weekend with another prospect in the flyweight division, someone she used to watch while competing in Invicta FC: Erin Blanchfield. Because the two competed in Invicta FC at the same time, Maverick feels that being able to train and prepare for her is easier than someone you know nothing about.

“I think being able to watch other fights and other performances makes it easier to fight her, just purely from the fact that I’ve seen her grow,” Maverick said. “I know what her talents are. I know how she fights to where when I go back and watch film it’s almost a review, not a complete ‘I have to see who this person is.’” 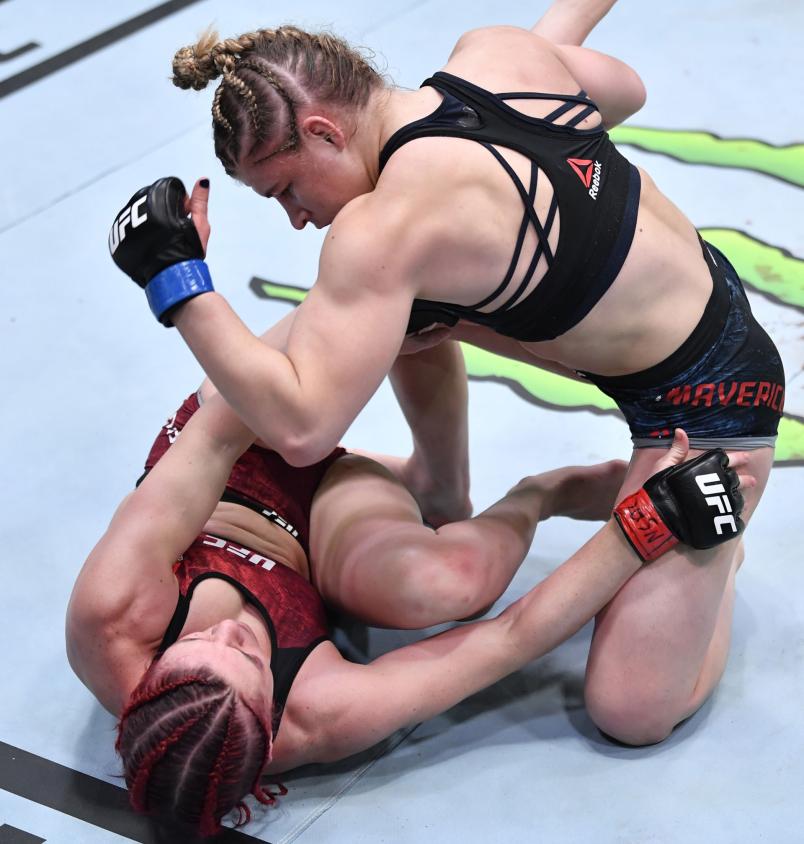 Miranda Maverick punches Gillian Robertson of Canada in their lightweight fight during the UFC 260 event at UFC APEX on March 27, 2021 in Las Vegas, Nevada. (Photo by Jeff Bottari/Zuffa LLC)

Blanchfield is two years younger than Maverick and is entering her second fight in the UFC. When the option came up to step in as a replacement for this fight, there was no doubt in Maverick’s mind of whether to take it or not. Maverick understands the path that Blanchfield is on as one of the division’s top prospects. Both fighters are early in their UFC careers and are constantly learning, growing, and improving their skills.

However, Maverick believes her experience, technique and fight IQ will be higher come Saturday night. Maverick plans to showcase skills that Blanchfield has never seen before, in the process, of course, seeking the finish, and handing Blanchfield her first defeat by finish.

“I think, by far, I am going to be her hardest fight, especially compared to this last one she had in the UFC. Sometimes you go and watch film and it is hard to say what someone’s talents are because of the talent level of the opponent they’ve faced, and I think Erin is going to have her hardest test on Saturday.”