"The Venezuelan Vixen" Ready For The Biggest Fight Of Her Career Saturday At UFC 269
By Steve Latrell, on Twitter: @TheUFSteve • Dec. 7, 2021

There’s an older generation that says, “the squeaky wheel gets the grease.” There’s a younger generation that advises to “shoot your shot.” Whatever Julianna Peña calls it, it worked. After years of calling for a matchup with bantamweight champion Amanda Nunes, she has finally manifested it.

“The most important thing is, regardless of the situation, I got the fight and now it's time to go do what I do.”

Originally slated to go down last August at UFC 265, a positive COVID test from Nunes forced the postponement to this Saturday, December 11 in the co-main event of UFC 269. Eager to make sure the bout stayed intact, Peña even appeared alongside the media at the UFC 265 press conference to get in a question with Dana White about her fight…to keep the wheel squeaky, if you will.

“There's no more talking,” she told UFC.com. “It's time to go take action and that's what I've been preparing for. I'm just preparing for war and come fight night, I will be ready.”

Peña understands perhaps better than anyone how precious time can be. Since becoming the first woman to win The Ultimate Fighter in 2013, her high-highs in the Octagon have been countered by the lows of time-sucking injuries. But despite injury-induced absences that have dotted her journey to date, her undeniable skills in the Octagon have always kept her hovering with the division’s elite.

“I am humbled and grateful for the opportunity to showcase my abilities and showcase my skill set on the biggest stage in the world. The fans give you so much great energy and so much great vibes. I just love the fact that the fans are going to be able to come out and see us. We are nothing without our fans.”

One of those fans is her biggest and probably her youngest: her daughter Isabella. Although born only in 2018, she’s already showing a knack for the family business. 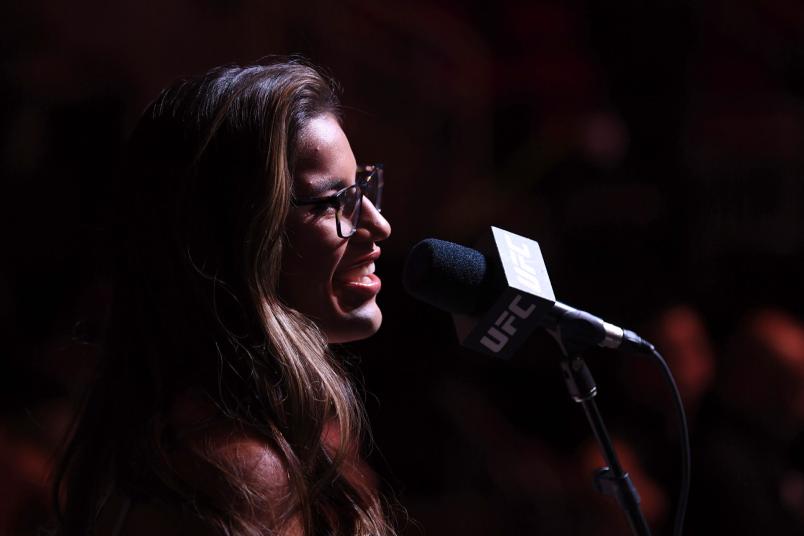 “Her dad owns a jiu-jitsu gym, so she trains in the kids jiu-jitsu program a couple times a week. She actually joined in on a little girl's private boxing session last week and that was cute. Then she's been lugged around with me to every gym that I've been to literally since she was born. So she definitely sees what I do.”

Peña is of the opinion that you need to stay fresh in the audience’s mind. In a sport as fast-moving as MMA, viewers can have a short memory. But with a win on Saturday, there will be no such worry. The first to dethrone Amanda Nunes? The eyes of the MMA world would be on her.

“I know that I have everything that it takes. I know that I'm more than enough to get the job done. Team underdog has kind of been my whole m.o. my entire career. So I'm definitely ready for those changes.”

She’s leaned on her team at Valle Flow Striking to prep for the champ, even gleaning some knowledge from younger talents like Ignacio Bahamondes, who is just starting to blaze his own path in the promotion.

“I can even learn tons from Nacho, even though I've been in the UFC longer than him. He's a freak as far as being a badass fighter goes in his striking…I'm like, can I get some tips? Help a sister out.”

Every little bit helps when you’re trying to round out your game against the two-divison champ many are already dubbing the G.O.A.T. But despite what has been an unsolvable puzzle for most, “The Venezuelan Vixen” exudes nothing but confidence.

To be clear, there aren’t many that have made a habit of calling out the champ the way that Peña has, but she insists it’s just business. Nunes just happens to be the fighter standing in the way of her dreams.

“You don't have to find things to nitpick about that person to hate on them for, you can just go out there and compete against them as a competitor. It doesn't have to be this nasty rivalry that I built up in my head in order to go fight this person. I don't hate them. It's just another human being, doing the same thing that I do.”